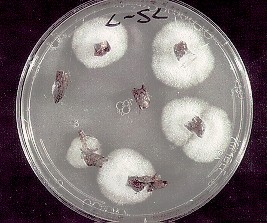 For Prof Brenda Wingfield of the University of Pretoria fungi are the stuff that genomics researchers’ dreams are made of. However, this tree disease expert’s fascination with genetics goes far beyond fungi. set out to unravel her own genetic ancestry. She has a Scottish king as ancestor somewhere in the very distant past, as well as Irish and Celtic heritage.

“Interestingly, along with the 1% African ancestry I have, I also share 2.9% of my genome with Neanderthals, for whatever that is worth!” says

“My current theory – and I am sticking to it – is that Neanderthals were blonde,” she jokingly wrote in a recent article in the South African Journal of Science.

One needs a light moments – even if they are of the academic kind – if one is as busy as Prof Wingfield is. Her commitments as deputy dean of the Faculty of Natural and Agricultural Sciences at UP, a position she has held since 2009, demands a fine balancing act to keep administration, management and research duties in check. She serves on several local and international scientific societies and is a currently also a council member of the Academy of Science for South Africa and Secretary General of the International Society of Plant Pathology. This is only possible because she is passionate about her work and thrives on challenges.

At home, the Wingfield family is used to long office hours and working weekends. Fortunately her husband, Prof Mike Wingfield, shares her passion for investigating tree pathogens. He is the director at UP’s Forestry and Agricultural Biotechnology Institute (FABI).

Prof. Brenda’s specialist field is fungi, and specifically the diseases they can cause to trees that are important to the forestry industry. She has been tackling these diseases using high-tech analytical and data gathering tools for the past 30 years. In the process, she has delivered several firsts in terms of dealing with devastating fungal tree diseases.

In 2013 she was the lead researcher in the first African project to map the genome of an entire fungus. Working with a team of collaborators and students, they plotted the billions of DNA pieces that make up the pathogen – a disease-causing organism – that causes pine pitch canker. This incurable tree disease can decimate commercial plantations. Continuing with their focus on fungi genomics, they now develop tools that foresters and tree breeders can use to identify and combat fungal diseases.

“In my line of work, the first important step is to find out what causes a particular problem in a tree,” Prof Wingfield explains her work as a “tree doctor”. “Knowing what causes specific symptoms brings you one step closer to being able to manage it.”

It is relatively easy to map the genome – or genetic map – of a fungus. Prof Wingfield says this makes it possible to find answers and solutions to questions that were previously only dreamt about.

Her current research is a continuation of pioneering work in the nineties when Wingfield and her collaborators at UP produced the world’s largest computerised database of molecular sequence data of tree pathogens. In so doing she became one of the leaders in understanding tree pathogens via DNA-based phylogenetics (the study of evolutionary relationships among groups of organisms).

Many of these findings and solutions are now used by the forestry industry – locally and abroad – and have helped to keep certain disease-causing fungi and bacteria out of pine tree nurseries and plantations. Knowing that your research is being used and making a difference in the forestry industry is an important motivator to keep on looking for new solutions.

“You cannot be a true academic if you do not feel an absolute high every time one of your students graduates,” says Prof Wingfield upon reflecting on other highlights associated with her life as a university professor. Many of her former students have gone on to pursue research and academic careers at institutions worldwide.

She draws a great deal of energy from her interaction with students. “These 20-year old know the world is still their oyster, and are willing to challenge ideas and beliefs,” she explains.

She is also known as a strong advocate for women in science and in 2009 she received a “Women in Science Regional Award” from the African Union.

Prof Wingfield has written or co-written more than 300 research articles on fungi; with about 100 published over the last five years. Further recognition of her global leadership in the field came towards the end of 2013 in the form of an A-rating from South Africa’s National Research Foundation. This year, she is a finalist in the National Science and Technology Forum Awards, in the category for research excellence. The winners will be announced on 3 July.