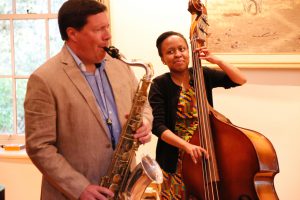 Dr Malebogo Ngoepe is also an avid musician, and is seen here performing at a recent STIAS function with MIke Rossi. Photo: Supplied

An engineer with more than a passing interest in blood clots, thrombosis and aneurysms? That’s Dr Malebogo Ngoepe, a lecturer in the Department of Mechanical Engineering at the University of Cape Town (UCT) since 2015. She is developing methods to better predict the occurrence of dangerous clotting in aneurysms in the brain and the abdomen.

She started working in this field because she was interested in deep vein thrombosis (DVTs), a condition feared by many who take regular long-distance flights.

“I would love to take the models I am developing further to also focus on DVTs, but haven’t yet found suitable partners to work with in this area,” says Ngoepe, who graduated from UCT with a BSc in Mechanical Engineering before heading to Oxford to do a PhD in biofluid mechanics.

Why are engineers at all interested in blood clots and what happens to them in the human body?

“Aneurysms have been studied extensively by engineers because the weakening of the wall is a structural problem and the blood flow is a fluid mechanics problem. The first major project which involved engineers in this work was via the European Union-funded @neuRIST Project which started in 2006, but this didn’t include clotting,” explains Ngoepe. “We have tools that combine structural weakness and fluid flows.”

Ngoepe knows that a clot can either stabilise an aneurysm or reduce the risk of rupture on the one hand, but on the other also cause it to rupture far quicker.

There are however many questions that doctors still have, but which this engineer from Polokwane would love to answer. When is an aneurysm likely to rupture? Should it be treated? How should it be treated? And when should it be done? A quick explainer about thrombosis might be of value. It refers to clotting and subsequent blocking of blood vessels. It is the underlying condition for many cardiovascular diseases. Clotting is also closely linked to aneurysms, which are balloon-like expansions of blood vessel walls caused by weakening of the wall layers.

In turn, aneurysms are most commonly found on blood vessels of the brain and on the aorta. These can rupture, and can have severe consequences such as strokes and even death. Clots that grow in aneurysms can either be a good thing by sealing off the aneurysm, or can exacerbate the situation by speeding up the time to rupture. Clots can also break away and cause problems elsewhere in the body.

Ngoepe says there’s still no method available that can be used to account for the presence of a clot, or can foretell whether it is will stabilise the aneurysm or cause it to rupture.  Cerebral aneurysms occur in about 2 to 6% in the population. Very few rupture but when they do, they have catastrophic results.

“They are often spotted accidentally when someone is being scanned for something else. The decision to treat is however a difficult one considering that the procedures are very invasive and there is the chance that it may not rupture. There is a need to know when to intervene,” she adds. “The current treatments which involve stents, coils and flow diverters can also cause clotting and, in some cases, speed up the time to rupture.”

Dr Ngoepe is a Iso Lomso fellow of the Stellenbosch Institute for Advanced Study (STIAS). The fellowship provides opportunities to African scholars who recently obtained a doctoral degree and who not only hold an academic position at a university or research institution in Africa, but also have established a research programme.

She recently had the opportunity to tell other STIAS fellows in Stellenbosch about her work, and the basics about the computational model she is working on. It uses medical imaging, computational fluid mechanics and biochemistry to predict clot growth in aneurysms which will enable doctors to predict how the clot will grow and whether it is likely to cause further damage and death.

“Clotting is about the interplay between chemistry, fluid mechanics and the vessel wall,” she continued. “The model brings together biochemistry, mechanics and complex geometries.”

Ngoepe has already developed a model for cerebral aneurysms (CA). She is now using it as a basis to develop one for abdominal aortic aneurysms (AAA). These occur in 2 to 5% of people, and most often among men older than 65 years old. Intervention is usually specified if the aneurysm is over 55mm in size.

Clotting in aneurysms is about the interplay between chemistry, fluid mechanics and vessel walls; the model brings together biochemistry, mechanics and complex geometries – #STIASFellow Malebogo Ngoepe https://t.co/ay9eAscUyA #IsoLomso #interdisciplinary pic.twitter.com/K8jNgBD40V

“Such an approach will be useful for elucidating clotting features which are common and different between the pathologies. This information will be useful for disease management and therapeutic approaches,” she explains.  “Surgical or endovascular interventions are possible but for abdominal aortic aneurysms, 75% of patients have some kind of related clotting.”

“Because the aorta is the main artery from the heart there is a much stronger blood flow and also a stronger pulse effect which affects protein transportation and therefore the biochemistry of the clot. The geometries of aortic aneurysms are also very different to cerebral aneurysms.”

Although there are clear differences between AAA thrombosis and CA thrombosis, Ngoepe believes the two conditions should be studied in parallel.

“The aim would therefore be to develop a computational model for AAA thrombosis similar to the one already developed for CA thrombosis. The framework would then be applied in idealised CA and AAA configurations, making it easier to draw comparisons between the two conditions.”

“Ideally you would want a patient-specific intervention pipeline which includes diagnosis of the aneurysm, comparing similar cases on an extensive database, imaging and blood tests, computational methods to predict outcome, and a proposed intervention,” she continued.

“The computational aspects include the ability to reconstruct a 3D-printed version of the blood vessels and aneurysm geometry, as well as a biochemical model which describes the patient’s clotting process based on different concentrations of proteins in the blood.”

However, the work is still a long away from being available as an instant desktop-accessible information in the hands of doctors. It also requires high-performance computing. It is possible to use a laptop, but calculations will currently take about three to four days and would therefore only be useful for non-critical cases.

“Ideally you would want to get this down to a reliable answer within a day,” says Ngoepe Who believes a balance would need to be struck between the level of comprehensiveness and getting a reliable result.

“You need a generalised model that moves towards patient specifics,” she adds.

Another problem is that scientists do not know enough about the biochemistry of clot maturation, and what would happen to it as it grows over the course of six months to a year. No models are available with which to do so.

“A longer timeframe would have to take into account more variables, for example, the effects of other medications like antiplatelet or anticoagulant medication,” explains Ngoepe, who believes that international multidisciplinary collaboration is vital to take this work further.

“Engineers, clinicians and other disciplines must work together on these challenges. We must support each other. Not doing so is catastrophic.”

* This feature is based on an article written by Michelle Galloway, for STIAS.

Jazz at STIAS! Thanks to #STIASFellow Darius Brubeck, UCT’s Mike Rossi and #STIASFellows Malebogo Ngoepe for providing top entertainment and insights about SA/township vs US jazz. This follows Darius and Cathy’s seminar the previous week on their memoir: https://t.co/Epd0x51Xds pic.twitter.com/pi5oGgyKmv