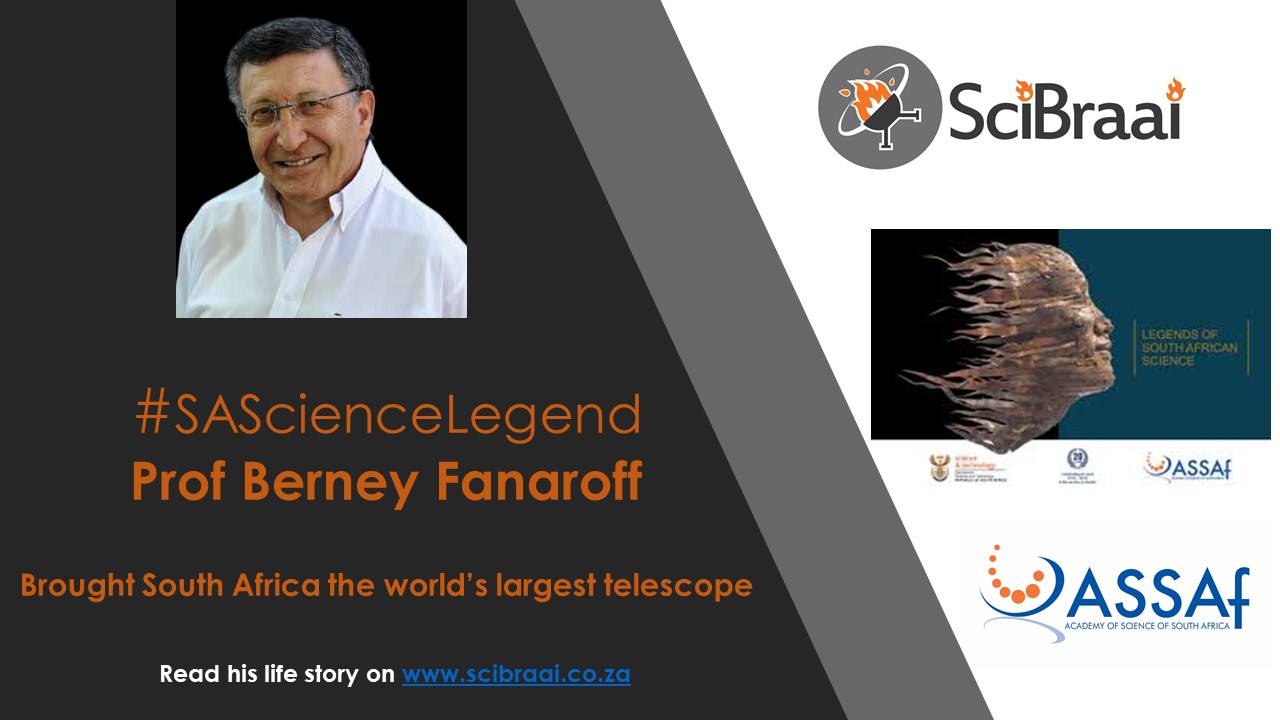 Dr Bernie Fanaroff did his PhD because of his interest in physics – and in the process developed a way to classify very distant radio sources that is still being used today. Since then, much of his efforts have gone into South Africa – among others as a union movement leader, as a civil servant in the Presidency under Mr Nelson Mandela, and as the leader of South Africa’s successful bid to co-host the Square Kilometre Array (SKA) Telescope Project.

Born in 11 September 1947 in Johannesburg, Bernard Fanaroff matriculated from Northview High School and completed his honours degree in theoretical physics at the University of the Witwatersrand in 1970.  He went on to Cambridge University to study radio astronomy where he held an Isaac Newton Studentship.

Defining moment: Receiving an Isaac Newton Studentship to do his PhD at Cambridge University, and meeting his wife, Dr Wendy Vogel.

Fanaroff arrived at the Cavendish Laboratory before most of the other new crop of PhD students. Julia Riley was also among the early arrivals, and both of them chose projects supervised by British physicist Prof Malcolm Longair.

“I’ve always been better at thinking visually than in numbers or equations,” Fanaroff states when explaining how the Fanaroff-Riley classification system of distant radio galaxies came about.

He was interested in the monochrome computerised contour plots of radio galaxies scattered around the offices shared by the graduate students, and started noticing some specific patterns.

Former SKA SA head Bernie Fanaroff says he believes #bigdata can be the country's next SKA, if there is solid investment push #SFSA2016

“Julia introduced some discipline into the work,” he adds matter-of-factly about his collaborative paper with fellow PhD candidate, Julia Riley, in Monthly Notices of the Royal Astronomical Society entitled Morphology of Radio Sources of High and Low Luminosity. This is still the most widely used way to classify these very large radio galaxies and quasars.

The paper was just “a sideline” to his actual PhD work on how populations of radio galaxies and quasars change through the history of the universe.

On completing his PhD in 1976, he returned to South Africa and the University of Witwatersrand (Wits) as a junior lecturer in physics. Fanaroff says his conscience made him complete his doctoral studies first, before starting to “work on some way of opposing apartheid and improving the lives of South Africans”.

“The [PhD] qualification was what I wanted to do, and enjoyed, and after that I felt I had to do something else.”

He rates his parents, Ike and Fanny Fanaroff, as the major mentors in his life. “Everything I learnt about having a social conscience, interacting with people, not being arrogant, being open and honest, I learnt from them.” This also included a strong dose of humanist ethics, and a reverence for learning, reading and knowledge.

In South Africa he met his partner of 36 years, Dr Wendy Vogel, a specialist in child and adolescent psychiatry. He rates meeting her as one of the defining moments of his life. They met through friends. After two years at Wits, Fanaroff was starting to consider a postdoctoral opportunity in England because he had not yet found an initiative that he wanted to pursue. Then a chance meeting connected him with some of the mobilisers of the emerging African union movement in Durban and Johannesburg, and so began his life as a unionist.

During the next 17 years, Fanaroff was not able to stay abreast of research in radio astronomy. It also became too expensive to subscribe to the necessary journals. Instead, he helped set up the Metal and Allied Workers’ Union, which in 1987 merged with other unions to become the National Union of Metalworkers of South Africa (NUMSA). He was to become amongst other things a National Secretary of NUMSA.

Nowadays, it is hard to imagine a time when unions did not have an active say in South Africa, but getting them off the ground in the 1970s was difficult. Fanaroff believes this part of history should be written up comprehensively, before it disappears from public view.

“Working in the unions was enjoyable, but the times were very difficult,” he adds. “I would not like to live through it again.”

Life as a civil servant

If there’s one thing he wouldn’t mind having another go at, though, it is the short-lived Reconstruction and Development Programme (RDP) of the 1990s.

In 1994, he became Deputy Director-General in the Office of former President Mandela and was Head of the RDP Office under Minister Jay Naidoo. He also set up the project management service, which later moved to the National Treasury.

“Working with President Mandela was a unique opportunity,” Fanaroff notes.

He remembers it as a frenetic time, with everyone in the country wanting to meet and work with the RDP team. Mandela closed the office after two years.

During the years between 1997 and 2000, he served as Deputy Director-General in the Ministry of Safety and Security. He worked alongside Minister Sydney Mufamadi, and then Steve Tshwete. During this time, he served as Chair of the Integrated Justice System Board and the Steering Committee for Border Control. These projects aimed to streamline business processes and information technology in the criminal justice system and border control.

In 2000, Fanaroff set up his own consulting business outside of government.

Bidding for the SKA

And then the Square Kilometre Array (SKA) happened, and Bernie Fanaroff came back to radio astronomy as Project Director of SKA SA.

The words “dogged”, “quiet”, “undemonstrative” and a “great negotiator” that are often used to describe him, came into play.

After giving up radio astronomy for so long, he came full circle back into the field, even though very much in a managerial role.

Of course the SKA wasn’t his idea. Prof Justin Jonas of Rhodes University (now Associate Director of SKA SA) and Dr George Nicolson, founding Director of the Hartebeesthoek Radio Astronomy Observatory, presented a proposal to Dr Khotso Mokhele, President of the National Research Foundation and Dr Rob Adam, then Director-General of the Department of Science and Technology (DST). (In 2016, Adam would follow in Fanaroff’s footsteps as SKA SA Project Director.)

As always, Fanaroff is quick to acknowledge the team effort that went into the successful bid process and now even more so in the planning and execution phases. One of the first MeerKAT radio telescope antennas does carry his name, however.

The precursor 64-dish MeerKAT, to be completed in 2017, will eventually be integrated with 133 other dishes to form the first phase of the SKA array. The construction of this first phase of the array in South Africa and the low-frequency array in Australia is expected to cost the international SKA Organisation 650 million Euro. The cost of  Phase Two will depend on the design, to be done in 2019. It will eventually also include about 2 500 dishes across South Africa and South Africa’s eight SKA partner countries in Africa. This array of dishes will be an interferometer and will be the most sensitive radio telescope in the world. Scientists will be able to look back into the history of the universe to when the first stars formed.

Among the accolades he has received: One of the first MeerKAT antennas was named after him, 2015; National Order of Mapungubwe, 2014; Named as the Ambassador of the Year by the Afrikaans newspaper Die Burger and the Cape Chamber of Commerce, 2012

“I am expecting our African scientists to win a Nobel Prize or two from the science to be done with it,” states this Visiting Professor in Physics at Oxford University and a Fellow of the Royal Astronomical Society.

At the launch of the first MeerKAT dish, Fanaroff said in the Business Day newspaper: “It shows we can do the best technology, the best engineering in Africa. We deliver what we say we are going to deliver. And we are going to do (great) science. If I were a lot younger, I’d want to work on this project, I’d want to win a Nobel Prize using this telescope”.

Fanaroff gains immense pleasure from working with dedicated people. At events he is often the person everyone wants to speak to and learn from, but who would much rather observe from the sideline, keenly aware of the dynamics happening around him.

“The most enjoyable part of this job has been to work with our team in the project, all outstanding people, and, in particular, the young people who want to learn more and are excited about the project.”

That said, he adds: “I’ve always had the attitude that I work as part of a team, and that everyone is an equal. With the proviso that decision-making isn’t always democratic – I’ll make the decisions, I am the manager”.

So why did he take on so many big challenging jobs?

“I’ve always found challenges very interesting, and once I start working on one, I want to complete it.”

“And to be successful, of course.”

“Being able to do things and contribute, that’s what I always liked,” Fanaroff summarises his take on work. “It’s like watching sport – I would rather play it than watch.”

After retiring at 68-years old at the end of 2015, Fanaroff stays on half-time in the SKA SA project as an adviser, ready to assist where needed. “I’ll see what else is interesting to do for the other half of my time,” he adds. He does hope to play more tennis – a game he hasn’t had time for during the past 40-odd years.

He’d like to be remembered as someone who inspired people, particularly younger ones, to aim for things that might sometimes seem unrealistic but can eventually be successful.

@NSTF_SA privileged to be represented at the Ministerial Dinner of the @ScienceForumSA Legends in our midst, firstly Mrs Naledi Pandor, Minister of Science and Technology, and now Dr Bernie Fanaroff presenting the progress of the @SKA_telescope Proud to be a@South African 🇿🇦🥇 pic.twitter.com/z1q5Usqmq6

Above all, however, Bernie Fanaroff will be remembered as the man who brought the largest scientific project to South Africa, and changed the scope of SA science and the possibility ingrained in the country.

As the National Order of Mapungubwe citation reads: “He served in all these positions with the single focus of making South Africa stand out in the global community”.

What people do not know about him: “Most things,” he says. Fanaroff does not like exposing his personal life to the media. Although he enjoys addressing people, he does not relish the spotlight.

[LISTEN] The Science Inside show about listeriosis and fake medicine