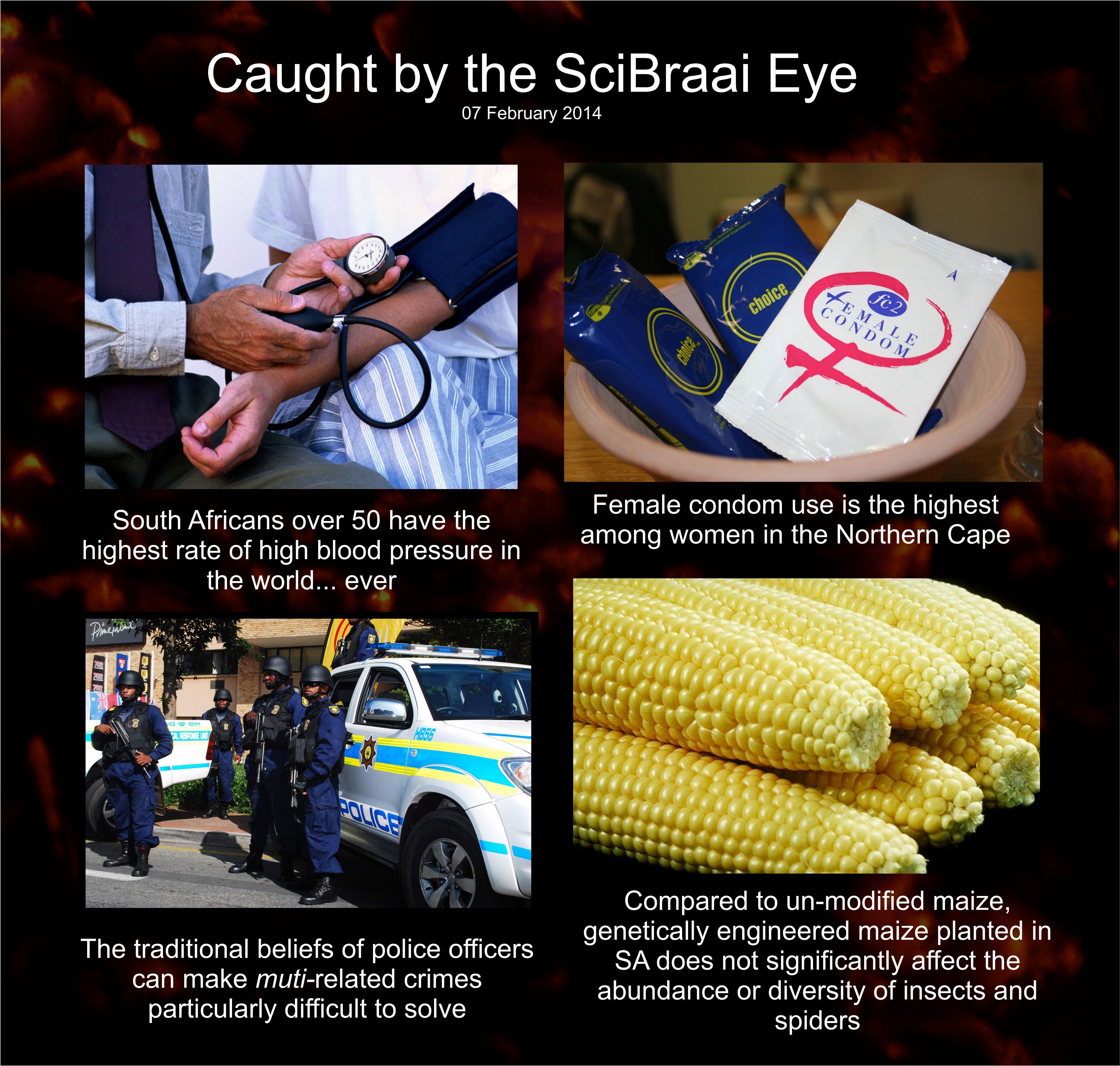 Female condom use is on the rise, but so is our blood pressure. And it seems GM maize is not that bad for bugs. Marinade your mind with this week’s SciBraai Eye, where we also look at what can happen when an investigating officer shares the traditional beliefs of the person responsible for a muti-related crime. Muti-related crimes in South Africa are not open-and-shut cases, but are quite sensitive and difficult to investigate for the police. One of the major obstacles is that it’s actually not regarded as a specific crime. The role of tradition, and the beliefs of the police officers themselves also influence any investigation into the removal of human organs and tissue to be used in traditional medicine.

So says Camden Behrens of the University of the Free State in an article she wrote for Acta Criminologica, the Southern African Journal of Criminology. In it, Behrens highlights the challenges facing law enforcement officers when investigating muti-related offences, and makes recommendations with respect to how these can be overcome.

Muti-related offences are those stemming from the removal of human organs and tissue for the purpose of traditional medicine; including murder, assault as well as the mutilation of corpses. Aspects of grave robbery and mortuary theft are also part of this.

Northern Cape women lead in use of female condoms

Male condoms remain a key tool in stopping the spread of HIV, and the female condom holds similar potential. However, although more than 3 in every 4 (77,75%) sexually active women above 15 years old know about the female condom, it is used by less than 1 in every 10 women (7,16%).

The disconnect between knowledge and use, while not surprising, is troubling, says Fiona Guerra and  Leickness Simbayi of the Human Science Research Council, in a study in Aids and Behavior. The study and many others, argue that female condoms should play a key role in South Africa’s efforts to curb the HIV epidemic and reduce the prevalence of unwanted pregnancies in the female population.

The study used data collected through a national cross-sectional population survey that was conducted in 2008.

“The gendered nature of the HIV/AIDS epidemic in South Africa requires that the sexual and reproductive health of women and girls be supported in ways that acknowledge, negotiate and ideally dismantle gender inequities,” writes Guerra.

Their findings support the need for a rigorous campaign to promote the use of FCs by women and also to increase their availability in public health sector facilities such as government clinics and hospitals in order to improve the chance of women using the FC, a cost-effective device that has the potential to protect both their rights and lives.

Reference: Guerra, F.M. & Simbayi, L.C. (2014). Prevalence of Knowledge and Use of the Female Condom in South Africa, Aids and Behavior

SA No.1 when it comes to high blood pressure

New research reveals that South Africa has the highest rate of high blood pressure reported among people aged 50 and over for any country in the world, at any time in history.

Analysis of data from a major survey found that 78 per cent of those who took part in South Africa tested positive for high blood pressure, or hypertension. Less than one in 10 people were effectively controlling their condition with medication.

According to a press release by the University of East Anglia, the data comes from the Study on Global Ageing and Adult Health (SAGE), conducted by the World Health Organisation (WHO), which surveyed more than 35,000 people aged 50 and over in South Africa, China, Ghana, India, Mexico and Russia.

The findings of the analysis are published in the February issue of the International Journal of Epidemiology. The study was led by Peter Lloyd-Sherlock, professor of social policy and international development at the University of East Anglia in the UK.

For the full press release on EurekAlert, read here:

The biodiversity of insects and related arthropods in genetically modified (GM) maize crop fields are essentially the same as that among conventional crops. This is according to a study in Environmental Entomology from the Northwest University, which is in line with previous studies from China, Spain and the United States on GM rice, cotton and maize.

“The aims of the study were to compile a checklist of arthropods that occur on maize in South Africa and to compare the diversity and abundance of arthropods and functional groups on Bt maize and non-Bt maize,” the authors wrote. “Results from this short-term study indicated that abundance and diversity of arthropods in maize and the different functional guilds were not significantly affected by Bt maize, either in terms of diversity or abundance.”

“The results of our study indicate that arthropod diversity, even in high-input farming systems, is as high as in subsistence farming systems” said Dr. Johnnie van den Berg, a professor at North-West University and one of the co-authors of the article. “More recently, surveys of arthropod and plant beta-diversity inside and adjacent to maize fields have been completed during which 30,000 arthropods and 15,000 plant individuals were surveyed along a 1,000 kilometer transect. It seems that maize field diversity is homogenized and field margins had a high beta diversity,” he added.

For the full press release on EurekAlert, read here.