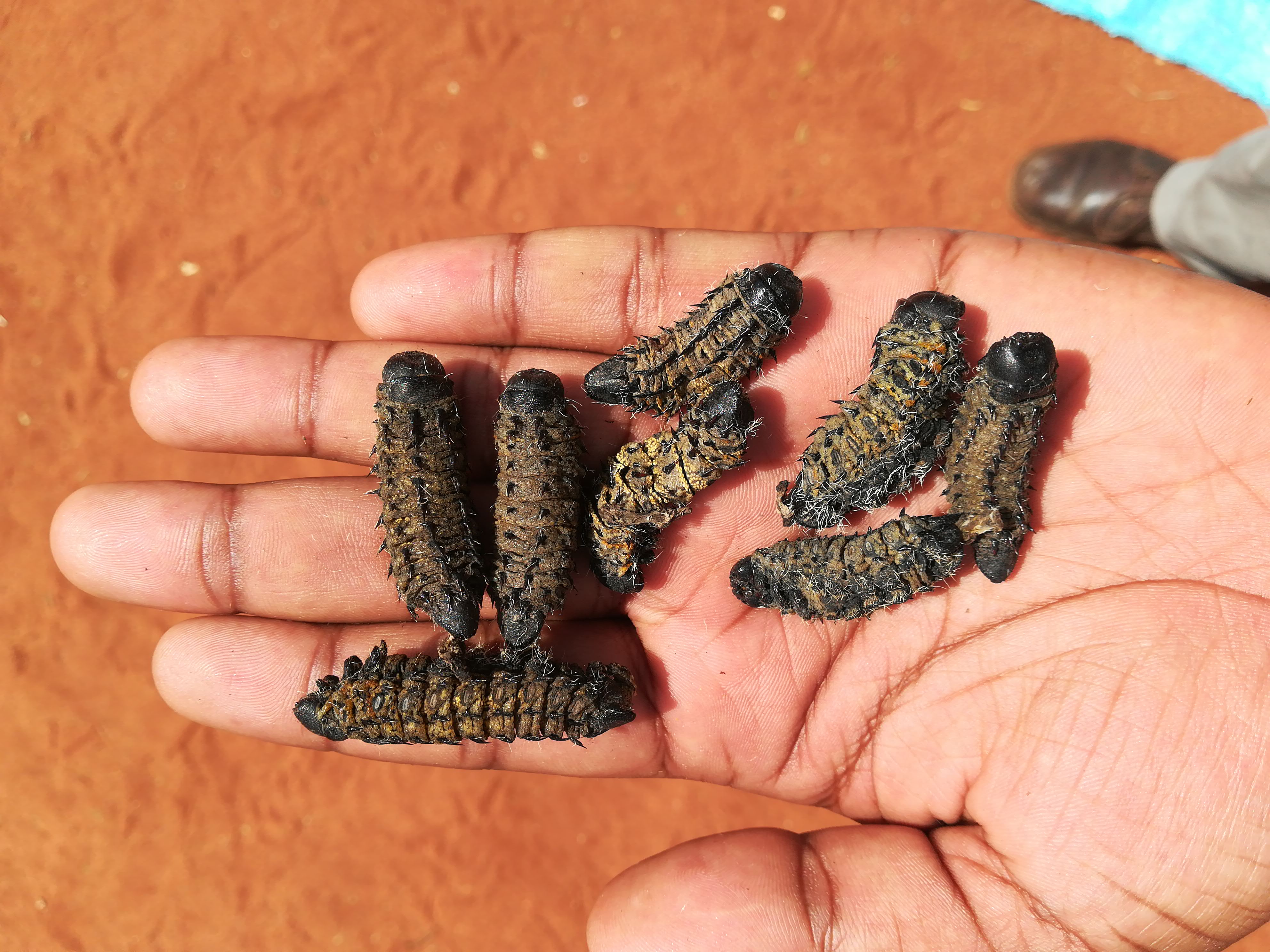 I’ve never eaten an insect on purpose before, but I am willing to try. The concept of entomophagy, or eating insects may be quite a foriegn curiosity to me, but not so to some South Africans who love the stuff.

So, I called George Sekonya, who is a PhD candidate whose Masters research put a spotlight on the trade and consumption of mopane worms and how they affect villages in Limpopo, in South Africa’s remote north-eastern region.

“The idea of eating a worm is just something that most people have not reconciled themselves with, except those that traditionally eat mopane worms as part of their diet,” says Sekonya.

His work made headlines in 2017 for showing the importance of the mopane worm in the informal economy of rural communities and how they are an integral part of cultural practices and livelihoods in the area.

For his masters research titled: Mopane worm use, livelihoods and environmental change in Limpopo Province, South Africa, in which he surveyed 30 individuals from over a dozen villages in the Vhembe district of the Limpopo province in South Africa’s remote north-eastern region. He was trying to gauge the role of mopane worms in the livelihoods of these communities.

“The researcher in me was then keen to say this knowledge has to go into the mainstream and it has to be pushed by somebody who is not introduced to mopane worms by reading a textbook but somebody who grew up with a mopane worm on a plate in the household.”

The paper that initially created my interest in this topic is I titled Legislation for the Use of Insects as Food and Feed in the South African Context. It is a chapter in a 2018 academic book called “Edible Insects in Sustainable Food Systems” that looks at edible insect food systems all over the world, with this particular chapter looking at South Africa.

The article was penned by a group of African researchers led by Saliou Niassy, of the International Centre of Insect Physiology and Ecology in Kenya. I found the article quite informative on the possibility of regulating edible insects in the country but I wondered why there was even a need to make these regulations.

The Niassy study points out that harvesting edible insects can be a threat to biodiversity and the stability of the ecosystem. “Commercial production of insects would likewise have to take into account any threats to conservation, depending on the harvesting and production techniques employed.”

I am not quite convinced that people are clamoring to start eating insects at all at the moment, so I am not so sure why regulation would be important right now. According to a paper by Shandukani Netshifhefhe on communities in Limpopo who dine on termites titled: Human uses and indigenous knowledge of edible termites in Vhembe District, Limpopo Province, South Africa, termite numbers are doing fine despite increases in termite harvesting over the years.

“With the growing population and the mass collection of termites, questions are being raised as to the sustainability of harvesting termites. Indications from the harvesters, based on the yields received per mound, were that they have not noticed any decline in termite availability over the years, even though harvesting has been increasing. Termite harvesters promoted responsible harvesting through mound rotations and protected mounds from destruction.”

With all this talk of regulation, Sekonya is concerned that community needs would be much considered if regulations are made into reality, based on his past experiences in similar processes.

“It is crucial that the needs of the communities are considered, not as a tick-box exercise.”

The Saliou Niassy  study is also concerned by the silence of some stakeholders. “It is crucial to depart from the current inaction and pose the debate in relevant instances by being more specific on the use of insects as food and feed,” the paper reads.

The paper then suggests that it should fall onto municipal by-laws, the closest form of government to these informal markets, to enforce any regulation of edible insects by mandating some standards for licensing and quality control.

“However, problems with the capacity of officials may mean that there is insufficient enforcement of by-laws, and the food trade in insects remains largely unregulated.”

Novel as the idea of eating insects might be to a lot of us, Niassy writes that legislation on regulation should not be treated this way in a country where eating insects is the norm, albeit found in informal settings.

As such, Niassy suggests that a “Council of Science” be established that would discuss topics such as the consumption of insects and how to regulate them. Such a council would be made up of government entities such as the Environmental Department and the Department of Agriculture, as well as include the private sector made up of traders and insect harvesting start-ups, and what the authors call “affected persons.”

How have communities been able to survive on edible insects for dozens of years without regulation? The solution might be indigenous knowledge, as Sekonya suggests.

“The colonists came, they dismantled that communal government system by disposing chiefs and so on, and putting in their people, and introducing all these formal governance systems and laws and so on.”

Indigenous knowledge has also played an important part in how villages in Limpopo harvest and consume edible insects such as termites. The Natshifhefhe study points out that it is important that this indigenous knowledge be passed down to younger generations, as most of the harvesters in the survey were over 60 years old, even though the whole family eat the termites.

“The harvesters indicated that the knowledge about which termite species to harvest was indigenous knowledge passed onto them by their parents or grandparents at a very young age or from other harvesters,” reads the paper.

To regulate or not to regulate, for now it seems that the people who consume edible insects have got it covered with their lively informal markets and their indigenous knowledge. I think that more research needs to be done in this area before regulation happens.