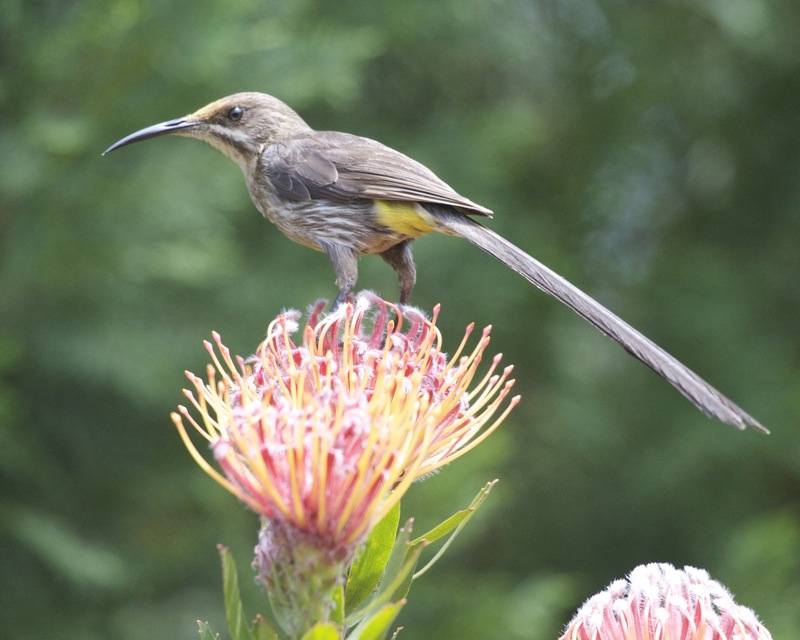 by Phoebe Barnard via The Conversation

Change. It can creep up on us so gently that we hardly even notice it. Yet the pace of environmental change in the world’s cities and landscapes, against the backdrop of the past millennium, is quite dizzying.

This past century has seen rampant growth in urbanisation, agriculture, mines, factories, sprawling infrastructure and the choking invasions of alien plants. This human transformation has been so far-reaching that we’ve started calling it a geological epoch: the “Anthropocene”.

Species facing this blitz of accelerating, human-driven change don’t always cope well. Birds are among the most visible windows into this world of vulnerability. And we know more about the impact of climate change on birds because people from many cultures watch them as signposts of change and meaning.

Cape Town’s spatial footprint in the apartheid era transformed the Cape Flats into a sea of low- and medium-income housing and industrial development. This isolated the “islands” of the incredibly rich fynbos mountain habitat on the Cape Peninsula and Boland mountains.

These flats now prevent the dispersal of many species across the largely hostile cityscape. The City of Cape Town and its

partners are trying to address this with an urban biodiversity network and a project to restore natural habitat “stepping stones” through fragmented environments for climate change adaptation by birds.

The fynbos biome is an east-west and north-south global biodiversity hotspot, hinged roughly around the city of Cape Town. Its phenomenal biodiversity, entirely comparable in richness and endemism to Borneo or Brazil, is increasingly crowded out by a diverse, mobile and economically divided human society.

At the periphery of this society, Cape Sugarbirds are flashy, long-tailed endemic icons of fynbos mountains. They and other endemics are powerfully affected by human urbanisation. Where they feed, breed and disperse is constrained by urban and agricultural landscapes. But birds can also use the shade, food, water and other nesting materials found in gardens and on farms.

Cape Sugarbirds eat nectar, insects and spiders. But when provided with nectar bottles in suburban gardens, they become greedy sugar fiends. Like baboons and other creatures along the urban edge, sugarbirds suffer from the same fast-food tendencies and ailments as the complacent, often overfed human population. A great documentary called Fat, Sick and Nearly Dead became a YouTube sensation among those taking health and diet seriously. And its lessons of fast, cheap calories are not limited to humans.

Sugarbirds in the city are vulnerable

My team of stress ecologists, veterinary pathologists and ornithologists is watching how sugarbirds and other fynbos endemic birds use resources in natural and urbanised landscapes – and how vulnerable they are to ailments, including obesity, that are linked to climate change and urbanization.

Brett Gardner, former vet at the Johannesburg Zoo, has autopsied young bottle-fed sugarbirds from urban gardens. He found them fat and sick – and, in this case, already dead – with poor body condition and visible signs of stress. More surprisingly, we realised that sugarbirds are increasingly infected by an invasive mite, Knemidocoptes, and in some cases, avian pox. These infections turn their legs into swollen, flaky masses.

Avian pox and mite transmission is thought to be easier in warmer conditions, and associated with bird feeders and bird baths. So, these diseases are potentially important indicators of climate change and urban stress.

We are investigating the extent to which climate change, urbanisation and sugarbird disease and stress are causally linked. We have also found that some novel sugars, like xylitol, are deadly poisonous to birds.

Cities and towns present both new threats and opportunities for birds such as Cape Sugarbirds. They appear to increase certain kinds of risk, like predation by cats, car strikes, window and building strikes and the incidence of disease. They probably decrease other risks, like the dangers of migration and dispersal, and the risk of predation by natural enemies such as goshawks or mongooses.

What you can do

There are two basic things the average city-dweller can do to help birds adapt to climate change and cities. You can provide natural, indigenous, vegetation in and around your home – even if you have only an apartment balcony. If you are blessed with a garden, you can plant locally indigenous plants (in fynbos, these include local ericas, proteas, restios and bulbs), and vigorously protect open natural habitat remaining in the neighbourhood.

And you can bell your cat, if you have one. In Cape Town alone, cats are estimated to kill millions of birds, geckoes and other creatures per year.

Providing bird food, like nectar bottles, is not strongly recommended. It may spread illness and poor health – and please, never use xylitol.

Birds in the city help us hold up a mirror to our own species. If we aren’t to suffer increasingly from the human equivalent of the colony collapse disorder experienced by bees, we need to watch these signposts carefully.

* Phoebe Barnard is the Lead Climate Scientist at the South African National Biodiversity Institute, and Lead Researcher, Climate Change Vulnerability and Bioadaptation at the University of Cape Town

This article was originally published on The Conversation.