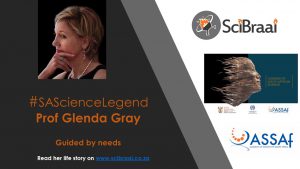 The road to Kliptown runs more-or-less directly south-west from the centre of Johannesburg, past the core of Soweto, and then takes a sharp turn to the right through Eldorado Park towards the bleak Walter Sisulu Memorial Square. Here, the Kliptown Perinatal HIV Research Unit (PHRU) is located, where one of Prof Glenda Gray’s many offices is to be found. Up the stairs and into a grey concrete corridor, five other organisations along, the clinic door opens into a glass and pressed-wood partitioned area. And in one of these areas, set up with the means for making tea, coffee and lunch, Professor Gray sits at a table trying to come to terms with the recent reconfiguration of her laptop.

The fifth of six children, born in Boksburg on the East Rand (her mother washed the kitchen floor before Gray’s birth at home and, afterwards, made tea for the midwife), Gray grew up as the strong- minded, strong-willed daughter of a strong mother. And partly for this reason, Gray’s career as physician, researcher, manager, leader and highly respected, international award winner, has taken a less direct route.

Her early career did, though, follow a more-or-less direct course. Gray completed an MBChB degree at the University of the Witwatersrand (Wits) in 1986. She describes her years at Wits Medical School as a golden age, when the professors who taught her and her fellow students included internationally renowned scientists, including anatomist and palaeontologist Philip Tobias, and organ transplant pioneer, Bert Myburgh. These “princes of medical research” were not just great scientists, she says, but also wise and witty teachers – a good start to any young person’s career.

Seven years later, she was admitted as a Fellow in Paediatrics of the South African College of Physicians. During the intervening years, Gray’s primary career moved steadily through the stages normally associated with those of a medical practitioner in the public service and academia. She served her medical internship at the Coronation Hospital in Johannesburg in 1987, and then immediately became the Senior Medical Officer for Paediatrics at Coronation in 1988 before moving to the Chris Hani Baragwanath Hospital, in the middle of that year, as the Medical Officer in Intensive Care. Between 1988 and 1995, Gray moved between positions at Wits and Baragwanath – but in 1996, that reasonably traditional road reached a fork and, in the words attributed to Yogi Berra, having reached the fork, she took it, founding (with James McIntyre) the Perinatal HIV Research Unit based at Wits.

While remaining, for a while, a medical practitioner and an academic at Wits, Gray became the manager and leader of the PHRU as its Executive Director, and a medical researcher. The shift was not easy. Working with patients at Baragwanath, facing the reality of mother-to-child-transmission of HIV, she realised that she had to do whatever possible to find a solution to the challenge. Her fear was that she wasn’t smart enough to be a medical researcher – but she talked to the mothers and, listening to them, realised that “they were the clever ones – they had the questions” and it was those questions, which at the time were questions without answers, which led to the new route in her life, and guided her research. This was probably the most defining moment in Gray’s life.

Defining moment: Realising that mothers had the questions to guide her research work.

Anyone can be a scientist

Gray also found it difficult to relinquish her practitioner’s role which she soon had to do. “I loved being a doctor, and moving from the immediate reward of working with individual mothers and babies, to the ‘detached’ work of the laboratory – with long term, although much greater impact” – was not without its costs. In the process, she experienced the sense of being a paediatrician being pushed into a researcher’s role. She soon came to believe, however, that “anyone can be a scientist: all you need is curiosity and persistence”.

What Gray leaves out of this notion, however, is the additional need to be highly intelligent and energetic and, in this arena of research, deeply caring and committed to human well-being – four qualities in which she abounds.

It did not take long for these two more-or-less parallel roads to become an extensive network of careers and commitments. The territory through which these routes made their way consisted largely of barren lands, dominated by the unknown, although dotted with points of knowledge and experience. Through her own research, and active memberships of numerous research groups, she began to help turn the points of what was known into regions that slowly spread their way into the barren areas of what was not known.

In 2013, while still working for the PHRU, Gray became the Director of the Office of AIDS Research at the South African Medical Research Council (MRC) and, just one year later, the President of the MRC – a demanding and high-profile position which she still holds. The time in between was not without additional learning and opportunities to advance her research base and credentials. In 1999, she participated in an intensive summer programme in clinical epidemiology at Cornell and on the basis of an International Fogarty Award, spent time as a postdoctoral fellow at Columbia. In 2011, the National Research Foundation (NRF) awarded her the status of an A-rated scientist, by which time she had been elected a Member of the Academy of Science of South Africa (ASSAf) and, for four years, has been the Chair of the ASSAf Standing Committee on Health – and has served on two of ASSAf’s expert panels. Her engagement with research and research teams goes considerably further as part of her role in filling in those ‘barren areas’.

As far as clinical research is concerned, Gray heads the National Institutes of Health funded Soweto Clinical Trials Unit, with three clinical research units, which undertake protocol specific work for the HIV Prevention Trials Network (HPTN). She was responsible for overseeing the first HIV vaccine trials that were run in South Africa, and has also spearheaded the clinical development of the South African AIDS Vaccine Initiative’s HIV vaccines. She was the protocol chair for the HIV Trials Network (HVTN) and is the protocol chair for the HVTN 073 trial that is investigating South Africa’s two HIV vaccines, the SAAVI DNA-C2 and the SAAVI MVA-C as well as the Protocol Chair of HVTN 097, evaluating the immunogenicity of the RV144/Thai study in South Africa, which has an annual budget of R300 million a year. Gray is also responsible for the Product Development Pathway for the HIV Vaccine Licensure Track. The P5 programme will lead to the expansion of clinical trial infrastructure in Southern Africa. This programme has a budget of R2,5 billion. Gray is a member of the AIDS Vaccine Advisory Committee for WHO/UNAIDS, the Scientific Advisory Committee for the International AIDS Vaccine Initiative, and the Scientific Advisory Board of the Centre for HIV/AIDS Vaccine Immunology and Immunogen Discovery (CHAVI-ID) with Scripps.

She says that she engages in the research that “keeps her enchanted”.

In her capacity as Chair of the ASSAf Standing Committee on Health, she was invited to represent the Academy in the National Health Research Committee and provided technical advice to the Director-General of Health on research and development related issues.

In 2002, together with James McIntyre, she was awarded the Nelson Mandela Health and Human Rights Award for pioneering work in the field of Mother-to-Child Transmission of HIV-1 – the award which means the most to her – not just because of the award coming from Mandela, but because it most closely captures her most important concerns in life – health and human well-being and rights.

Gray’s research has resulted in the publication of over 250 internationally recognised papers and she has given a vast number of public addresses related to her research. It is not surprising, then, to know that she is a Member or Fellow of eight local and international professional and scholarly associations, and that she serves on several panels and committees ranging from vaccines, to global health to assessing priority setting for health in developing countries.

As for the future, Gray hopes that as she enters her third year as the President and CEO of the MRC, her leadership will have been consolidated and her teams will be working in coordinated ways on their projects. If this turns out to be the case, she will continue her research work and – importantly – devote more of her time to her professorial work at Wits.

Is there a way to summarise Gray’s illustrious and hard-working, diverse career?

Probably not. But at the very least, mother-to-child-transmission of HIV, and research and testing around vaccines would probably take centre stage. These are the themes that run along the roads of her career, and fill the landscapes surrounding the roads. Any summary would be incomplete, however, if one were not to include her fundamental humanism, her concern and care for women, children and families affected by HIV and AIDS – and her determined, steadfast efforts to address the problems that the disease hauls along in its wake.