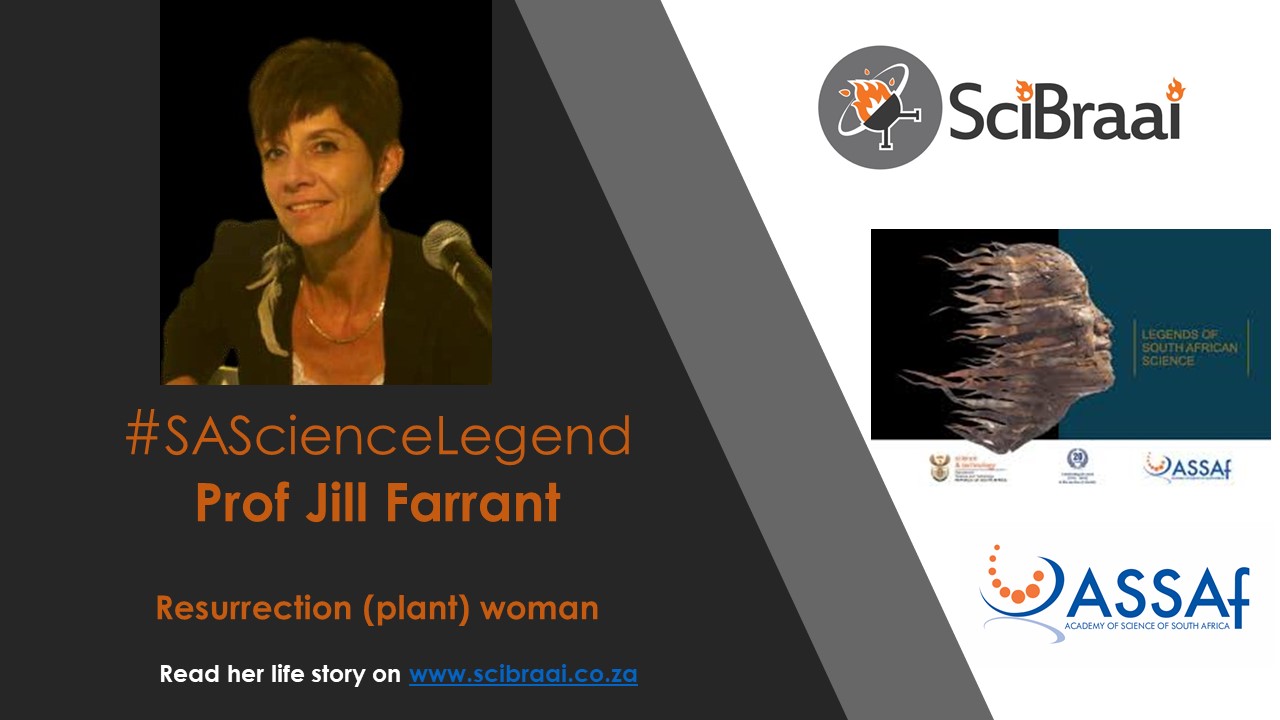 Prof Jill Farrant’s life merges with water. To be more specific, she’s occupied by the ability of a rare few so-called resurrection plants to seemingly die off when none of this life-giving source is available, only to bounce back within hours once a few drops come their way.

She was born in the summer of 1960, during a time when the Vaalwater district in Limpopo where the Farrant family farm, Hartebeespoort, is still located, experienced a particularly severe drought. Her birth on 5 December coincided with very heavy rains, which subsequently broke the drought.

“The employees on the farm decided I was the bringer of rain, and gave me my African name of Mapula, meaning Mother of the Rain,” remembers the South African Research Chair in the field of systems biology studies on plant desiccation tolerance for food security at the University of Cape Town (UCT).

Mapula isn’t the only nickname of this multi-award winning professor and mentor to many. When she appeared in a local television series featuring iconic South Africans, she was called the “Rain Queen”. And when she was celebrated as a 2012 L’Oreal-UNESCO Laureate in Life Sciences, her photograph on one of the billboards in the streets of Paris honouring the winners was dubbed “The Queen of Africa”.

“Weirdly enough, when I go up to the family farm to visit, it rains,” she adds with a mischievous smile in UCT’s Department of Molecular and Cell Biology. Here she keeps a small plastic container with resurrection plants handy, to show visitors who are somewhat incredulous about the Lazarus ability of her chosen subjects.

Farrant was born more than a decade after her brother or sister, and grew up quite alone on their farm (now called Culmpine). Still, it was a time of discovery and wonder, which transformed her into a keen naturalist.

One such discovery was a bobbejaanstert (Xerophyta retinervis) growing on some flat rocks near the river where she loved to play. She noted how particularly dry and dead it looked. Then the rains came. When she again passed that way days later Farrant’s nine-year old self noticed that the plant had almost miraculously revived.

Resurrection plants? Read about how a scientist Jill Farrant is helping Africa prepare for drought in the latest issue of @ForbesWomanAfri

It was 1970, a year before the first paper about resurrection plants was to be published in scientific literature.

Farrant was keen to tell her hardworking father about the phenomenon, but he didn’t believe her. She then wrote about it in her diary. It was during one of only two times in her life that she had tried to keep up such an endeavour, she says. The other time was during an around-the-world yacht trip during which she very precisely plotted out the subject of her subsequent PhD research project.

The childhood diary entry would have been lost into oblivion if it wasn’t for her beloved niece and nephew’s mischievousness. They discovered it packed away among other books and dared each other to investigate it further – as children do.

Remorse made them own up, though. In the process, Farrant read her long-forgotten scribblings again, only to realise how as a mere youngster she’d already made her very first observation of a resurrection plant.

“I see a plant at the age of nine, and I write about it in my diary. Why?”

“I am spiritual,” she answers herself. “When I look back at my life and the things that made me make the choices I did and led me to a place where I am now, I realise there must have been a plan for me.”

Farrant initially considered becoming a doctor like her paediatrician brother but opted for marine biology after staying with a school friend’s family on the Solomon Islands during her matric holidays. The warmer waters of South Africa’s east coast lured her into studying it at the then University of Natal.

These culminated in her receiving a UCT research chair in 2007, an A-rating from the National Research Foundation and the Harry Oppenheimer Fellowship in 2009.

While studying in Durban she met her mentors, the husband-and-wife team of Norman Pammenter and Pat Berjak. They taught her how to be expansive yet practical in her research. “They showed me what is possible, despite of me,” acknowledges Farrant, who was recognised for her own mentorship abilities and as a role model to biologists worldwide through the EPFL-WISH Foundation Erma Hamburger Award in 2015.

Norman was very practical about what one needed to do to get results. He’d make her take apart pieces of equipment so that she could learn how to use them properly.

“Pat taught me to think big, not to be scared, to use lateral thinking, and to follow my dreams even when they were impractical at times,” says Farrant, who has over the years seen 30 MSc and 20 PhD students graduate, and currently has 18 postgraduate students under her wing.

It was Berjak who also introduced Farrant to recalcitrant seeds, the sub- sequent topics of her MSc and PhD research. These so-called wet seeds are produced by, among others, coffee plants, amaryllis and clivias, and cannot dry out or be frozen to store and conserve them as can be done with 94% of all other seeds. In the 1980s, these seeds that germinate immediately after being released from the mother plant were “brand-new phenomena” to science, and Farrant became the first South African student to investigate their workings.

A very short stint at the Institute of Oceanography in Stellenbosch to work off her Masters bursary made her realise she wanted to be “more than just a pair of hands for someone else” and to do original thinking.

After obtaining her PhD in 1992, Farrant spent a year in the National Seed Storage Laboratory of the American Department of Agriculture, thanks to a postdoctoral bursary from the Foundation for Research Development.

Logistics, and a desire not to follow so very precisely in her mentors’ footsteps, resulted in a serendipitous career change to study extremely drought-tolerant plants.

When she started lecturing in botany at UCT in 1993, it was difficult to get hold of enough samples to continue her research on recalcitrant seeds. Plants producing them are not typical of the Western Cape and researchers only have a window of a few weeks per year during which to work on these unstorable seeds.

She was reminded of a paper she had read during her PhD years – the one published in 1970 on resurrection plants. Since then, she has used her knowledge about seeds that cannot dry out to understand plants that survive without water contained in or around them.

Most plants die off once they lose about 60% of their water content. “A plant that can lose all its water yet live is absolutely unusual,” stresses Farrant, whose work on bio-engineering drought-tolerant plants and pasture grasses as part of efforts to increase food security have since been funded through fellowships from the Royal Society of South Africa, the Harry Oppenheimer Memorial Trust, UCT and The World Academy of Sciences (TWAS). “Everything on this planet is made up predominantly of water, all life actions happen in water and loss of water causes death – except for resurrection plants.”

To be precise, there are only 135 higher order angiosperm plants world- wide typically growing in extreme environments that can do so. The number goes up to 320 if some lower order plants such as algae, mosses and lichens, are included.

Around 260 genes involving many different pathways help a plant to be desiccation tolerant. Farrant’s group has identified some potential “tipping point” factors which turn these critical gene pathways on. Once this occurs, subcellular and especially biophysical changes are initiated that ultimately bring about metabolic quiescence. Once irrigated, the plants rejuvenate within one to three days. Some experience a brief growth spurge, as if to make up for lost time.

Farrant’s vision is simple: to replicate this extreme genetic drought-tolerant ability in important crops, so that they too can survive without water yet thrive once it does become available. This will make it unnecessary for farmers in drought-stricken areas to have to sow new seeds for grazing and maize after each dry cycle.

“Yes, the subsistence farmer may be delayed in harvesting his crops, but when it rains again the plants can start growing from where they were,” she explains.

She believes the chemical protection that resurrection plants enjoy during these constant dry periods could also be useful for medical purposes. The design company Giorgio Armani, for which Farrant consults, already uses extracts from resurrection plants in one of its leading cosmetics.

Over the years she has featured widely in the media, which has prompted yet another series of nicknames such as “Resurrection Woman” and “Lazarus”. These refer to what Farrant calls her “chequered history”. For years she was a functional alcoholic, and nearly died three times. Once was because of a serious kidney stone, another was due to an alcohol-induced incident. In another, she slipped on a wet surface, banging her head severely, causing a subdural brain bleed, which ultimately left her without any sense of smell or taste.

Defining moment: When she was on stage giving the acceptance speech for the L’Oreal-UNESCO Awards in Paris, and realised quite emotionally how her life had culminated into that one moment.

None of these experiences has stopped her from treading in unchartered territory, and receiving the respect of her peers and students alike. She has published more than 110 peer-reviewed articles in top journals, authored or co-authored 14 book chapters, fulfilled many editorial and academic responsibilities, and has participated in peer and grant reviews for various national and international grant agencies. She sits on the jury of international award-granting committees such as the Agropolis Foundation and the TWAS and serves as Jury President of the L’Oreal-UNESCO sub-Saharan African Women in Science Fellowship Programme.

“From the word go people said I was mad, that what I’m working on is too complex,” she grins with a certain amount of satisfaction.

Jill Farrant studies resurrection plants that appear to die and revive again once the rain has come, hoping to one day have a deeper understanding of what makes these plants so resilient. This could sustain crops during periods of drought. Watch a video: https://t.co/PsL88NXygS

She likes to think that she will be able to achieve the research goals she has set herself within her lifetime, yet realises that much is funding-dependent. She trusts that those she has helped train and mentor will be able to carry her flag after she retires. “I never say never.”

What people do not know about her: She has a new moon, a cross and a phoenix tattooed onto her shoulder, symbolising her faith, new beginnings and opportunities. 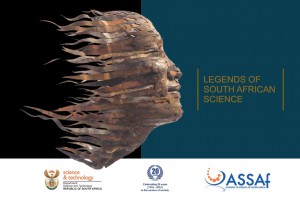 raai in collaboration with the Academy of Science of South Africa (ASSAf) will feature the life stories of 53 South African science legends. These stories were all included in the 2017 book “Legends of South  African Science“. If you cannot wait for your weekly installment of Legends profiles, you can download the full book here

A sports car and a glitter ball are now in space – what does that say about us as humans?

[LISTEN] The Science Inside show about listeriosis and fake medicine