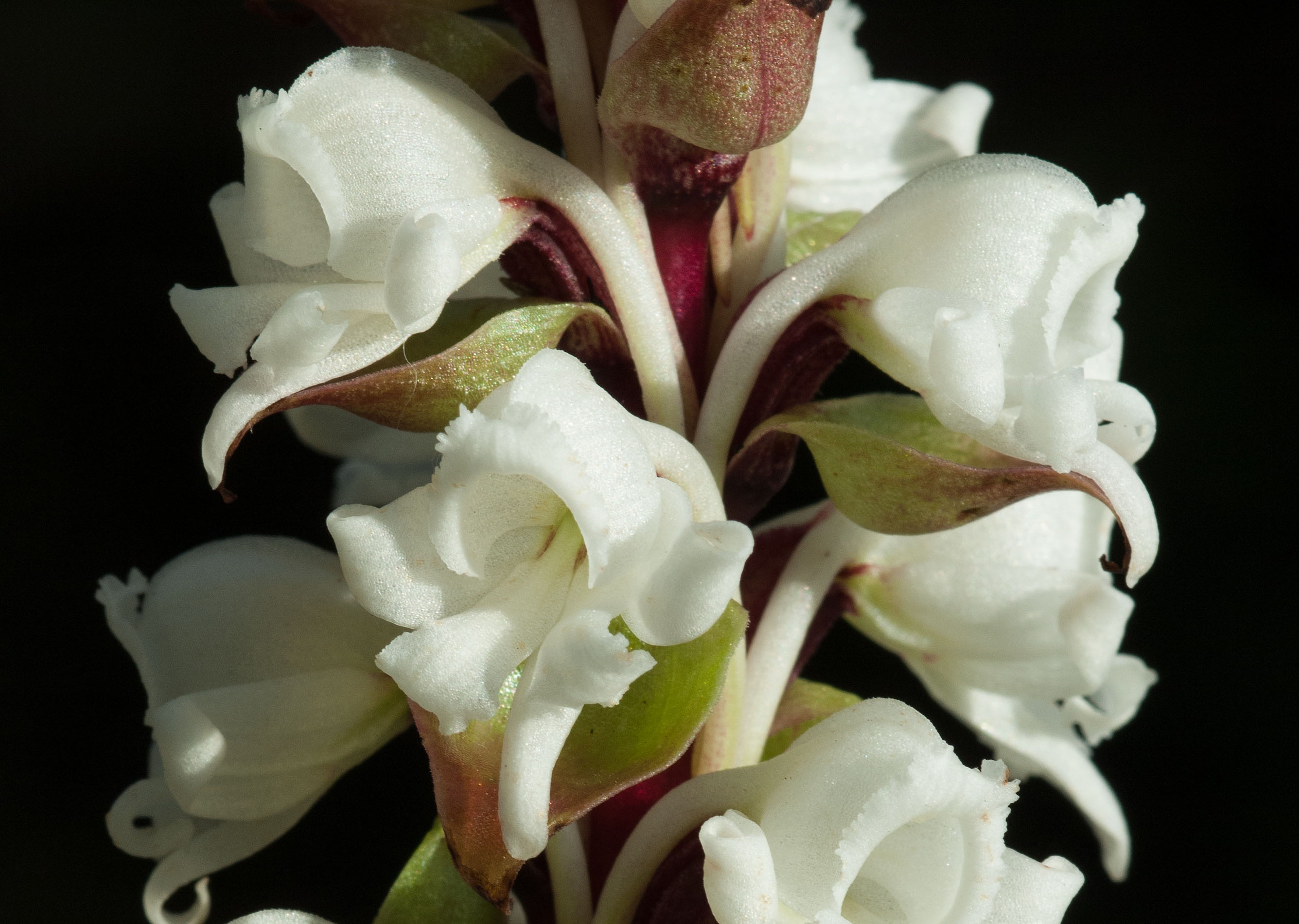 Bill Liltved, the driving force behind what many people call the “opus” of South Africa’s orchid species, has been honoured by having a newly identified white orchid species from the Kogelberg mountains being named after him: Satyrium liltvedianum.

The new species is announced in the latest edition of the South African Journal of Botany which is available online already.

It was discovered in 2009 by Dr Timo van der Niet, now a senior lecturer in Evolutionary Biology at the University of KwaZulu-Natal, and Mr Herbert Stärker of Vienna in Austria. At the time Dr van der Niet was a postdoctoral fellow in the Pollination Ecology research group of Prof Steve Johnson. Mr Stärker and his wife Helga have travelled all over South Africa for more than a decade to photograph orchids in their natural habitats. Some of their photographs also appear in “The Cape Orchids” book which Liltved and Prof Steve Johnson compiled.

Scibraai asked Dr van der Niet a few questions about the discovery, and why it was decided to honour Liltved, who lives in Noordhoek on the Cape Peninsula, in this way.

Q: When and where was the discovery made?

A: On 10 November 2009, Mr Stärker and myself went out to the Steenbras Catchment area near Rockview Dam in the Kogelberg Mountains to look for orchids. It’s part of the Kogelberg Biosphere Reserve, a mere 70 km from Cape Town.

The area had burnt earlier that year and many Cape orchids flower in the first spring after a veld fire. While driving through the area, we noticed a group of white-flowered Satyrium orchids, and stopped the car. Several Cape orchid species of the genus Satyrium look alike with their white flowers and long nectar tubes (spurs). In this case, the plants initially made us think of Satyrium candidum, an orchid that is known from the Cape mountains. On closer examination I noticed that some features of the flowers were different compared with Satyrium candidum. This prompted me to study the plants in more detail.

Q: Tell us a bit more about this new species.

A: The plant reaches 12 to 24 cm above the ground, and produces between 6 and 20 flowers. At the site, many blossoms (technical term = inflorescences) were eaten, presumably by some species of antelope. A typical feature of the plant is the bucket-like leaves along the beetroot-red stem which accumulate water. We do not yet understand the function of these leaves.

The flowers are white and produce a pleasant fragrance. Each flower has, like any Satyrium, two long tubular spurs (2 cm for this species, but up to 12 cm for other species) that are filled with nectar (sugar water), which is consumed by animals that pollinate the plant in the process. Although I did not notice any visits by animals while being in the field, I speculate that, based on similarity with other Satyrium species for which we have seen animals visiting, the new Satyrium species is visited and pollinated by moths which are active at night.

Q: Why did you decide to honour Liltved by naming the new species after him?

A: Bill is one of the authors of “The Cape Orchids”. This book, which consists of 2 volumes, provides a fantastic and comprehensive account of each orchid species that occurs in the Cape Floristic Region of South Africa (one of only 6 worldwide plant kingdoms).

It took Bill 20 years to collect all the data and write the book, which is beautifully illustrated, and full of information about the natural history and distribution of each Cape orchid species. Through the writing of this book, Bill has made an invaluable contribution to our understanding of the Cape orchids, walking in the footsteps of previous Cape orchidologists such as Harry Bolus.

However, unlike Bolus, Bill has not yet been honoured with an orchid species named after him. It was therefore a great pleasure to name this handsome new Satyrium after Bill Liltved.

Q: It’s through detailed genetic and chemical study that the orchid was confirmed as a new species, is it not?

A: Yes. I did a genetic analysis for which we obtained the sequence of small pieces of DNA from the orchid. This was then compared to the DNA sequence of other Satyrium orchids. This revealed that the Kogelberg orchids have a unique DNA sequence that is not similar to any of the Cape satyriums to which I compared it. Together with the subtle differences in flower structure between the Kogelberg plants and Satyrium candidum, this result warranted the description of a new orchid species.

Q: How does it feel to have discovered a new species?

A: It is important that biodiversity is not only known to a few specialists, but is shared in the public domain. For instance, a species can only obtain conservation status, once it has a name attached to it. Humans are curious about the natural world and naming species goes back centuries. I feel very privileged that I can make a contribution to this enterprise.

Almost never do we go out specifically find new species. In fact, new species are almost always found as a by-product of other work. In this case we visited the region because of the recent fire, in the hopes to find many orchid species flowering, which could be photographed and studied. Finding a new species in the field does not happen very often, and is rarely planned, but is a great bonus!

Regular field work is an important component of the work biologists do, as through their expertise they can recognise if something may be new to science. Other ways in which new species are discovered is by studying historical collections in Natural history museums (herbariums, in case of plants), where new species may have been incorrectly identified as something that was already known.

Q: You mentioned that the discovery was made when you went orchid hunting. Tell us a bit more about your interest in these plants.

A: Orchids are one of the largest plant families, and I want to find out why this family has produced so many species. My interest in Cape orchids in general, and the genus Satyrium in particular, dates back to my PhD studies under the auspices of the South African professor Peter Linder, who works at the University of Zurich (Switzerland). I have published many papers on the taxonomy and systematics of the genus and subsequently on the pollination ecology of many Satyrium species. One of the most interesting aspects of orchid biology is their usually highly specialized interactions with animal pollinators. In Satyrium only we have accumulated evidence for pollination by a wide range of animals, including bees, moths, beetles, but also sunbirds and carrion flies. Interestingly, each Satyrium species has its own specific pollinator, which is determined by the way it looks and smells.

Q: Mr Stärker is an avid photographer, is he not?

A: Yes, together with his wife Helga he has made a fantastic contribution to our understanding of South African orchids through their photography. They live in Vienna in Austria. Together, they have travelled South Africa for over a decade, photographing details of each orchid species in their habitats. Herbert’s photos have featured in the “The Cape Orchids” book by Mr Bill Liltved and Prof Steve Johnson, and in a field guide to the South African orchids.

Q: Is it true that South Africa has a wealth of orchids?

A: Yes, South Africa has a relatively rich orchid flora, and the Cape is particularly rich in orchid species. However, many orchid species are only known from few sites and – depending on where they occur – are greatly threatened. In particular, species that occur in areas which are attractive for development are in great danger of (local) extinction.

Q: Satyrium liltvedianum is only known to grow in a single site in the Kogelberg mountains. What is the significance of this?

A:  So far we have only found about 50 plants of this entire species. Interestingly, the habitat where the species occur is not particularly unusual or threatened. In the publication I speculate that the species may represent a ‘paleo-endemic’, i.e. a species with a narrow range that has persisted for a very long time on evolutionary time scales, but may now be near to extinction (a fate that ultimately will affect any species on earth). The evidence I provide for this is its unique DNA sequence that is very different from that of any other Satyrium species compared.

Q: Why did you do the genetic analysis work?

A: The genetic analysis was done to compare the species to other Satyrium species, to confirm that it is in fact distinct. Genetic analyses we can do by extracting DNA from plant tissue. DNA forms the building blocks of any living organism, including humans. DNA consists of strings of four different types of building blocks. The particular sequence of these four building blocks determines what protein is produced, where and when, which leads to differences we see between species. The sequence of DNA cannot be read from the extract, but first needs to be amplified in the laboratory, targeting a specific region of interest.

Q: You also performed specific chemical tests. Why was these done?

A: The chemical analysis was done to characterize the scent that is produced by the plants. This may be indicative of the way the plant attracts animals for pollination. For instance, many moth-pollinated plants produce specific fragrance compounds. In this case, 95% of the scent bouquet consisted of a compound called beta-Linalool, which is a known moth-attractant.

We can characterize the scent in a bouquet by first trapping it on to carbon particles, held close to the plant which is enclosed in a bag.  These traps are the inserted into a machine that performs Gas Chromatography coupled with Mass spectrometry. First, individual compounds are separated in a long column, according to their specific chemical properties (e.g. heavier compounds travel more slowly, etc). At the end of the column they are decomposed and specific properties of each part can be used to identify the nature of each compound.

This evidence contributes to understanding the pollination ecology of the new species, although actual field observations of moth pollination are still required. This may, however, have to wait until the next veld fire, when the plants are expected to come out in good numbers again.