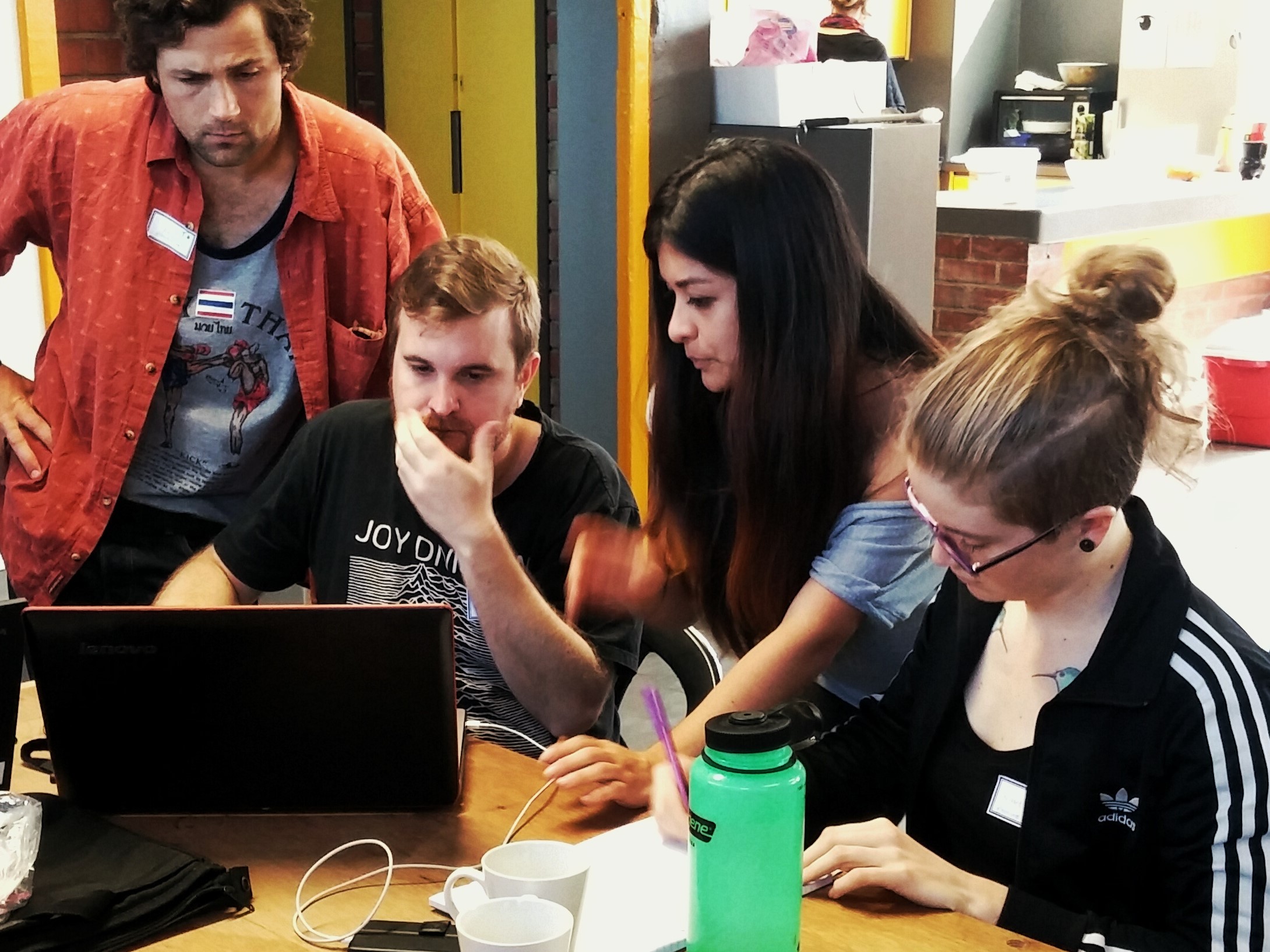 Nine teams of three to four participants worked feverishly over the course of the day, with a little guidance from Code4SA’s resident techies and data journalists. There were many South African data sets available, including data about South African dams, causes of death, and poverty levels in South African municipalities.

#DataQuest #SciBraaiLive scientists, journalists and techies make for a colorful conglomeration of people – the buzz of potential stories

Participants had to understand the data, find a story within the data, and then visualise it using mapping, graphing and statistical analysis. Finally, they had five minutes to present their pitch for a story to the panel of judges. Raymond Joseph and Adi Eyal of Code4SA, as well as our very own Anina Mumm, were the judges on the day.

“I’m thrilled with the turnout, especially regarding the science journalists and scientists, all of whom added really unique skillsets to the Data Quest format,” said Mumm.

Most participants said that they’ll be taking many lessons home from the day, and they had really enjoyed working with people from other disciplines. Considering that participants were randomly assigned to teams, and had only six hours to work together, the final products were remarkable.

Third place went to Matthew Barge, Bridget Calder, Shabier Jacobs , and Ady Keyser, for a project that looked at how public transport entrenches inequality in South Africa.  Isaac Lundall, Rebecca Weber, and Ashton Maherry took second with their tool that shows you where in SA your water comes from. The winning team of Wogan May, Joey Reddy and Bibi-Aisha Wadvalla mapped SA hospitals and graded them based on self-assessments to show where SA hospitals are working and where they are not.

“The outcomes surpassed my expectations – all the pitches were excellent so I’m really proud of the efforts and spirit on the day, said Mumm. “Well done to everyone, and a big thank you to the teams, Jennifer Walker, Raymond, Adi, Jason Norwood-Young and all the techies from Code4SA for making the day a success!”

Besides the winning teams, data questers found stories about water service delivery, about the impact of community facilities on matriculation rates, and even a story about Mbeki’s legacy on South African demographics. We even saw evidence of past  and present failures in HIV/AIDS policy, right there in the census data.

The first four teams present their stories at the end of a 6h #dataquest with total strangers cc @code4sa @Athi_Saba pic.twitter.com/qZ5TGu7nrc

The three best projects will now work with SciBraai and Code4SA to develop their stories to be publication-ready. As Ray Joseph said at the end of the prize-giving ceremony, “This isn’t the end of these stories; it’s the beginning.” Keep an eye out for these stories in the next month or two – they’re definitely going to be worth exploring.

This was SciBraai’s first ever Data Quest with the folks from Code4SA and the ICfJ. The next Data Quest is coming to Johannesburg on October 9th 2015, in partnership with Hacks/Hackers JHB and the GCSRI. If you attended the first and would like to share your experience, or you missed out on it and you’d like to participate in the next one, be sure to get in touch!