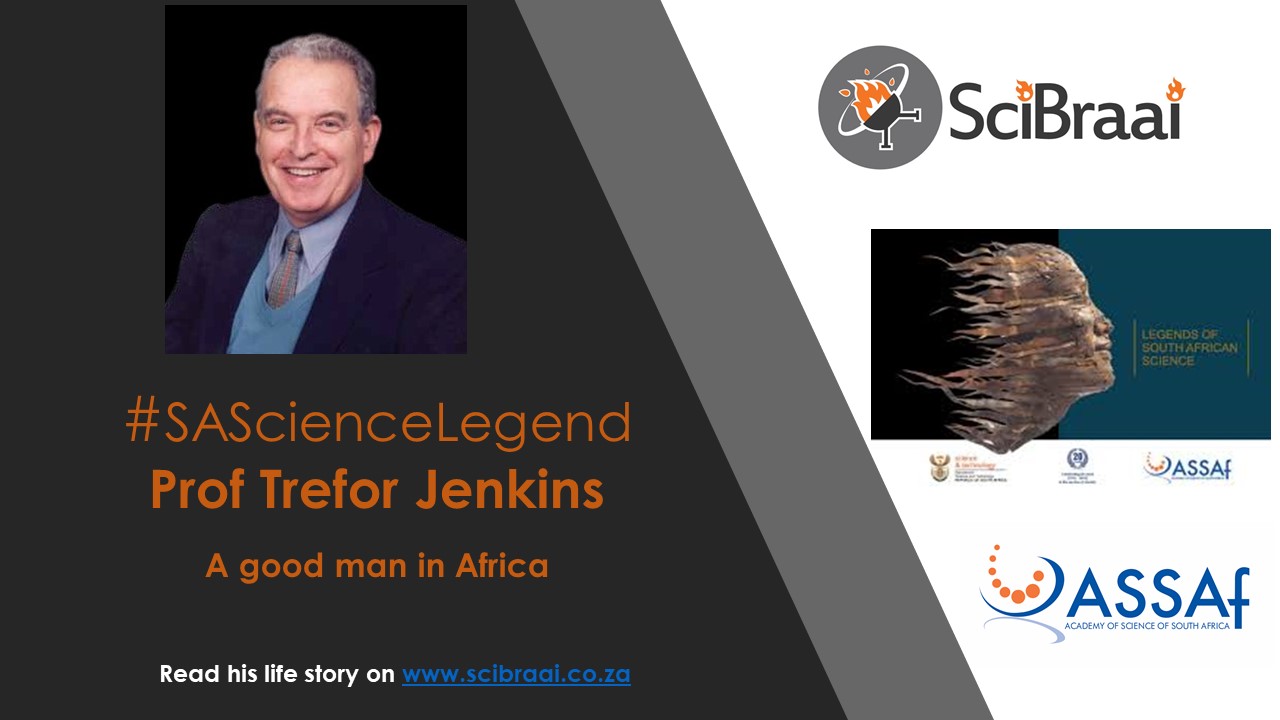 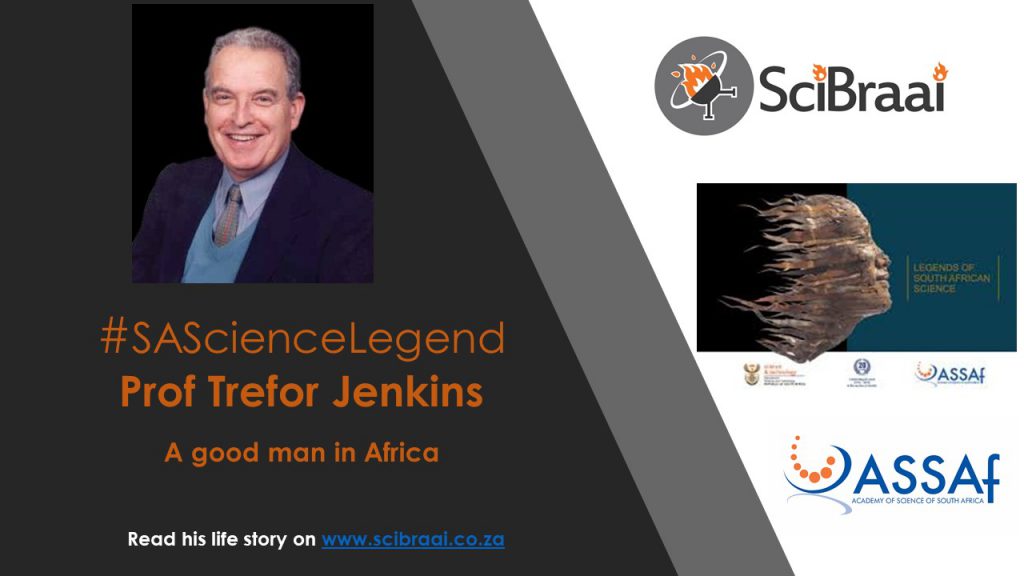 When the Ford Foundation and the Oppenheimer Family Trust agreed, in 2004, to make a joint Endowment Grant to the University of the Witwatersrand (Wits) to found the Institute for Human Evolution (now transformed into the Evolutionary Studies Institute) the university set about finding a suitable Director for the institute. When the selected candidate (Dr Charlie Lockwood), who had been one of Philip Tobias’ doctoral students, was killed in a tragic motorcycle accident in London, the university found itself in need of an Interim Director. Emeritus Professor Trefor Jenkins was asked, and agreed, to take on the position.

As the Ford Foundation Programme Officer responsible for the Foundation’s portion of the grant, John Butler-Adam, Editor-in-Chief of the South African Journal of Science met with Jenkins on several occasions. At the end of each meeting, his first impression of Jenkins was reaffirmed: an accomplished scientist, a humanist, a wise manager, a kindly human being. In short, “A Good Man in Africa”. But in this instance, a truly good man in Africa.

Jenkins was born in Merthyr Vale in Wales in 1932. In an interview with Professor Sir Peter Harper, he described his home town as set in the Taff Valley, not far from Cardiff, and his family as being “working class, the antecedents of Welsh miners”. He attended the Quaker’s Yard Grammar School, a few miles down the Taff Valley from his home in Merthyr Vale and on completing his schooling applied to study medicine at the University of Cardiff, the first member of his family to attempt to enter a university (or to succeed in doing so). He was, however, turned down, and so spent the following academic year doing two extra school-leaving subjects – botany and zoology (with a little extra physics) – and, in the next year, was accepted to study medicine at King’s College London. Ironically, he was considered to be over-qualified to subsequent clinical training took place at the Westminster Hospital. Jenkins time at King’s was enriching, “a fine education” in his own words and, like any self-respecting Welshman, he sang in the college choir.

After qualifying, he undertook his required house jobs at St Stephens Hospital and supported surgery for Dr Daryl Waters. On completing his housework, Jenkins started his national service in the army, which had a shortage of medical practitioners. He was, however, not good at marching (only Roger Bannister, his corporal told him, was as bad). Nor was he a good shot, and when told to aim higher, excused himself by saying “Look, I’m really a pacifist and trying to hit the target in the legs, not the heart”. Completing his national service, Jenkins worked in two hospitals – focusing on obstetrics in one and in anaesthetics in the other as he had already decided that he wished to work in Africa, and felt that those two were areas that would most likely to be demanded of him. He first wrote to the Baptist Missionary Society asking if he could serve as a missionary doctor for three years, but the society indicated the they would only consider his application if he were willing to devote his life to missionary work. Unwilling to follow this course, he was subsequently hired by Anglo American to work as a mine doctor.

His first posting was to the Anglo mine in Wankie, Southern Rhodesia (now Zimbabwe) where he was assigned to the paediatrics ward. Having no real experience in paediatrics, he was sent to the hospital in Livingstone (on the northern side of the Victoria Falls) where, in a week, he learned all he could and then returned to Wankie. In this work, it was his encounter with sickle cell anaemia in the paediatrics ward that turned out to be the first of the major defining moments in his life. He had never heard of the disease before and, fascinated by it, realised that he had a real interest in research as well as clinical practice. And that is where his research career, never encouraged in Britain, came to the fore and began to take prominence in his life.

A medical technologist at the hospital taught Jenkins how to screen sickle cells on a slide and a fellow doctor, a graduate of the University of the Witwatersrand (Wits), told him about Wits. He contacted the Wits library and had bound copies of the British Medical Journal (BMJ) sent to him, “wrapped in brown paper” and learned as much as he could about the disease, before undertaking field research (combining that with research on bilharzia) in the Zambezi Valley.

In order to continue his move into research Jenkins had, however, to break his contract with Anglo American before the end of his term – which meant that he and his wife would have to pay their own way back to London. While making arrangements for their trip, he met Denis Burkitt who was on “his famous tumour safari” as Jenkins puts it. Burkitt showed him photographs of a newly identified lymphoma/tumour – which Burkitt was sure would also be found in Durban as he had made an intuitive link be- tween the tumour and malaria. So Jenkins and his wife routed their journey ‘home’ through Durban, where he had secured a surgery post as an interim measure, until his research could continue. On his first ward round, however, he identified cases of the very tumour he had seen in Burkitt’s photographs and so, in another defining moment in his career, Trefor spent a year finding and following up on Burkitt’s finding and publishing a paper.

One of his medical colleagues in Durban turned out to be a former Tobias student – who introduced the two scientists – and Tobias gave Jenkins a minor job as a “table doctor” in the Department of Anatomy at Wits. He did, however, continue his clinical work at the (then) so-called Non-European Hospital, where he worked with Harry Seftel.

As a result, his hospital work was not just further good clinical experience, but also turned out to offer him considerably more insights into a range of diseases that he had never before encountered. Being the insightful per- son he was, Philip Tobias offered Jenkins a longer-term lectureship, and he ended up undertaking field work for Tobias who, although it was not then his field, had realised that genetics was “the new anthropology”.

In 1968, Jenkins spent a year at Case Western Reserve University in the United States, working with Arthur Steinberg (famous for his work on the genetics of the immunoglobulins) and then returned to Wits, and set off on the research path that would ultimately lead to the establishment of the Department of Human Genetics in 1975, of which he was the Head.

The years between 1969 and 1975 were active years in Jenkins’ research career. His transition to human genetics came in 1969 when he took up the positions of Head of the Human Sero-Genetics Unit at the South African Institute for Medical Research (SAIMR) and part-time lecturer in human genetics in the Department of Anatomy. He was awarded an MD in 1973 and became a specialist pathologist (haematological), registered with the South African Medical and Dental Council (SAMDC), the same year. He was also an Honorary Geneticist at what is now the Johannesburg Hospital and at Baragwanath, and Senior Haematologist at the SAIMR. He won the Watkins-Pritchford Prize of the SAIMR in 1969.

In 1975, the new Chair of Human Genetics was created at Wits and he be- came the first incumbent, combining the management of the Institute with ongoing research. In 1978, he became the Associate Director for Research at the SAIMR and the Assistant Dean and, not unexcitedly, Student Advisor in the Faculty of Medicine at Wits.

Jenkins ‘retired’ in 1998 and subsequently became an Emeritus Professor and an Honorary Professorial Research Fellow in the Division of Human Genetics. During his retirement, he took an active interest in medical ethics and was appointed to a part-time post in the discipline at the medical school. He also played a major role in the establishment of the Institute for Human Evolution, and acted as Interim Director from 2004 to 2009.

Jenkins was a prolific writer: during his academic career, he published many papers, in peer-reviewed journals, as well as book chapters and books. Due to his extensive research record, he was awarded a Medical Research Council unit, with funding for three successive five-year periods from 1977 to 1993. His enormously successful Department of Human Genetics is still the largest in the country, expanding the staff, taking higher degree students and covering many aspects of the field from serogenetic, cytogenetic, clinical, epidemiological and psychosocial to the ethical, molecular and population genetics aspects. He also extended the laboratory, educational and clinical genetic services, and kept up to date with international developments in the field.

His educational interests led him to increase the contribution of genetics to the undergraduate medical student curriculum, while his enthusiasm for research led him to encourage his staff, colleagues and clinicians to pursue higher degrees in human genetics.

In his private life, Jenkins was a bibliophile, who spent time collecting major historical scientific works dealing with South Africa. One of his prize items, about which he often spoke, is John H Wellington’s Southern Africa: a Geo graphical Study. Part 1: Physical Geography published by the Cambridge University Press in 1955. One of Wellington’s reviewers has said of the book that “The classic monograph is usually seen as a methodological and conceptual break with the past, a work which introduces a new discourse and is ahead of its time. Yet the excellence of a classic can also lie in the fact that it is typical of its time and represents the best that was possible with the available knowledge and insights. Such a work was Wellington’s Southern Africa.”