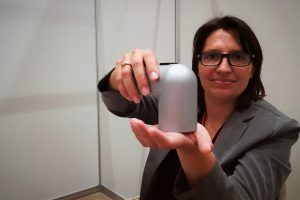 Vinette Coetzee of the University of Pretoria, showing how the malaria scanner her team is developing might look like. Photo: Engela Duvenage

The answer to whether people have malaria or not is written in the palms of their hands. So says University of Pretoria researcher Dr Vinet Coetzee, who is developing a handheld scanner that would one day be able to within seconds detect if someone has contracted this mosquito-borne disease – one that affects up to 216 million people every year, and causes up to 445 000 deaths worldwide.

Coetzee, one of the 2017-2019 Next Einstein Fellows, was speaking at the Next Einstein Forum in Kigali in Rwanda this week. She said that a provisional patent for the proof of concept was successfully filed in the UK last week. No publications have yet been released.

🎙NEF delegates sharing their feelings about the conference.

“By scanning the palm of a person’s hand, it will be possible to give a simple ‘yes’ or ‘no’ whether someone has malaria or not, and to do so within seconds,” explains Coetzee, who hopes that research funding will become available to take the concept further. Her dream is to make a portable, weblinked handheld device available for use in clinics and hospitals around the world.

People with malaria initially often think that they might just have the flu. Sweats, chills, fever and headaches are among the symptoms that they experience, and therefore it is quite difficult to detect the disease in its early phases. If left untreated, it could for instance lead to severe anaemia, breathing problems and organ failure.

Most methods currently being used to make a malaria diagnoses require the analyses of blood. For some only a single drop of blood is needed, while for more specialised ones much more needs to be drawn – a scary experience in itself for especially children.

So how does it work?

Coetzee says that if her ideals are realised, the malaria scanner could be a simple matter of placing a handheld device on top of a person’s palm for a second or two, and then waiting for another moment to read the results.

“This could make it ideal to use to diagnose children, for instance,” she says.

So how does the concept work? In the background, machine learning techniques and specific algorithms are being combined with reflectance spectrophotometry, in combination with already available portable spectrophotometer. Spectrophotometers are devices that take readings based on the reflective properties of a person’s skin or a piece of material. The wavelengths that are reflected back are picked up by the device and processed using task-specific algorithms.

The algorithms used for the malaria scanner was written by Coetzee’s collaborator, Dominik Endres of the Philips Marburg University in Germany. The data on which these are based comes from a collaborative Cassavita II study with the University of Wageningen among 319 children in Tanzania. Coetzee is currently conducting further research to extend the size and diversity of the population data being used, and to also include data from other population groups to further validate the use of the technique.

According to Coetzee, the technique has been shown to be accurate in 73 to 77 percent of cases tested against current highly accurate malaria blood tests. “The ability of the device to accurately detect whether someone has malaria if they have it is 94-95%, which means that they can be very confident that they are correctly detecting the individuals that have malaria,” she adds.

Coetzee, who is a senior lecturer in the University of Pretoria’s Department of Genetics, became interested in the topic through her work in the field of facial features and skin properties, and how these aspects can be used to gauge whether someone has specific medical conditions.