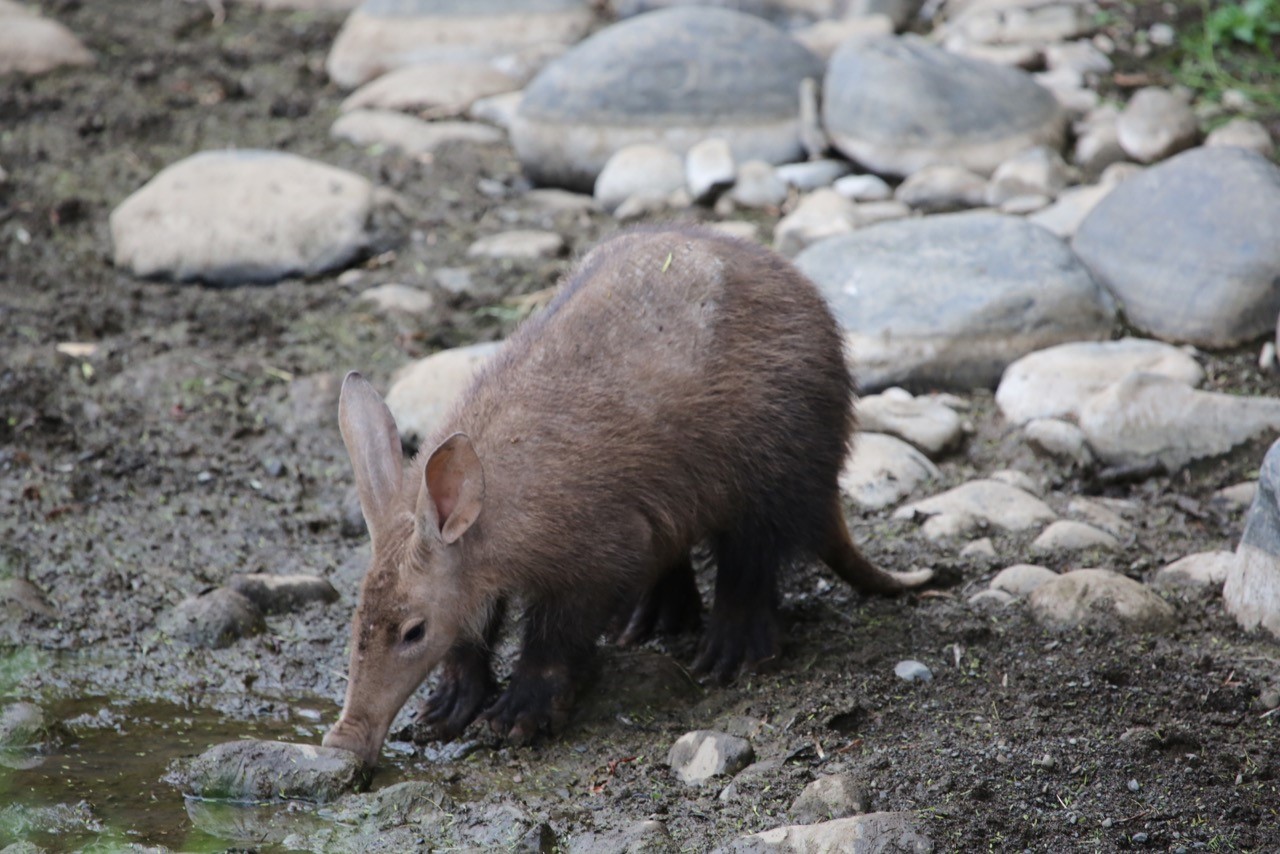 Scientists do not always get their aha moments when they implicitly set out to find one. Serendipity often comes into play, which then warrants further investigation and eventual discovery. Sometimes these discoveries put pay to hearsay, and provide much clearer facts. Such is the Case of the Drinking Aardvark.

Prof Graham Kerley of the Centre for African Conservation Ecology at the Nelson Mandela University had previously visited the Samara Private Game Reserve near Graaff-Reinet to research how aardvark dig and move soil. This time round, however, Kerley and his students were working in the reserve on a baboon project.

Late one afternoon he saw an aardvark drinking at a puddle of water in the reserve. The light was quite poor, but he was sure that his eyes had not deceived him. He even had a photograph – albeit of poor quality – to prove it.

The sighting made Kerley reflect on what he knew about the animals’ drinking and eating habits. He knew about an often-cited Dutch paper from 1958 that said that aardvark do not drink from rivers or dams, but feed on the fruits of the aardvark cucumber (Cucumis humifructus) to obtain water.

“I asked the simple question as to what we knew about aardvark drinking, and then read up on scientific literature,” Kerley remembers his realisation that this aspect of aardvark ecology was so poorly understood and documented.

The review of aardvark biology and ecology in Mammals of the Southern African Subregion (2005) by Skinner and Chimimba only noted that the animals do drink water. The information is attributed to two personal observations by other researchers. In turn, the 2013 Mammals of Africa states that aardvark fulfil their water requirements from arthropods they prey on, but provide no basis for the suggestion. No mention is made of drinking. Other volumes state that aardvark is not found in deserts, but do occur in areas such as the Kalahari where surface water is rarely available.

Kerley then discussed the matter with Isabelle Tompkins of the Samara Private Game Reserve. She actually had a photograph of an aardvark drinking.

“We then decided to see if we could put together a body of evidence to address the ambiguity around aardvark drinking,” says Kerley.

They began sourcing other photographs showing the behaviour. Four were eventually included in a paper they published in the African Journal of Ecology earlier this year. One was taken at the Timbavati Game Reserve, and three others on Samara. In the paper they also refer to one in a book published on the Karoo. From the photographs, the research duo concluded that aardvark drink both in an opportunistic fashion (such as from an ephemeral rain puddle) and in a more purposeful fashion when they move towards a river or a dam to drink.

According to Kerley, the paper shows that scientific understanding is not just a gradual accumulation of data, but advances when previously accepted ideas are overturned.

“Weak science was the problem. The scientific community did not bother to challenge the dogma previously set forth that aardvark do not need to drink if they get their water from their food, such as termites or the obscure aardvark cucumber,” he says.

So why should we worry about whether aardvark drink water or not? So what?

“Despite being the first animal listed in English dictionaries, the aardvark remains a species of obscurity, particularly in terms of its ecology and conservation requirements. This reflects the challenges of studying this burrowing, shy and largely nocturnal species. However, as one of the most conservation-worthy mammals in Africa, understanding its ecological requirements is critically important,” the two mammal experts write.

They conclude their paper with comments that more research is needed about the role that available water sources play in the health and distribution of aardvark. “In the light of global change predictions of altered climates and water availability, such studies should be a priority for furthering the conservation management of this species,” they write.

In light of this, new findings in the journal Biology Letters are worth noting. Researchers of the University of the Witwatersrand found that these animals are also vulnerable to climate change – as is the case for many other species.

Dr Benjamin Rey and a team from the Wits Brain Function Research Group were collecting data about the activity and physical well-being of aardvark and used tiny implanted biologgers or sensors to do so. Unfortunately, five of the six animals they monitored died because of a drought in the Kalahari Desert. Eleven others also died in the area.

The team’s hypothesis is that the animals starved to death. At the time of the drought, the air temperatures were much higher than normal and the soil was very dry. “While unusual now, those are the conditions that climate change is likely to bring as the new normal,” said research group director Prof Andrea Fuller in a press release issued by the University of the Witwatersrand.

Aardvarks usually sleep during the day in burrows that they have dug, and emerge at night, to feed on ant and termites, using their long, sticky tongues to sweep up thousands of insects. Based on the research of others, the researchers assume that during the drought the termites and ants, on which the aardvark depends for body energy were not available.

“The severe drought was likely to have reduced aardvark prey availability,” the researchers write in the Biology Letters. “Soil moisture directly affects activity, development and survival of subterranean insects such as ants and termites, on which aardvarks depend.”

As a result, the aardvarks’ body temperatures fell precipitously at night. The aardvarks tried to compensate by shifting their search for ants and termites from the colder night to the warmer day, so that they would not have to use energy to keep warm, but that was not enough to save their energy stores. The aardvark progressively became skinnier and bonier. They even tried sun-basking to save energy, but many ultimately died. Their body temperatures dropped to as low as 25°C just before they died.

“It is not because the aardvark’s body can’t take the heat, but that the termites and ants that they rely on – not just for food but also for water – can’t take the heat and aridity of changing climates,” Dr Rey speculates in the press release.

Rey, B. et al (2017). Drought-induced starvation of aardvarks in the Kalahari: an indirect effect of climate change, Biology Letters

The Science Inside: about paintbrush lillies, passwords and science kits