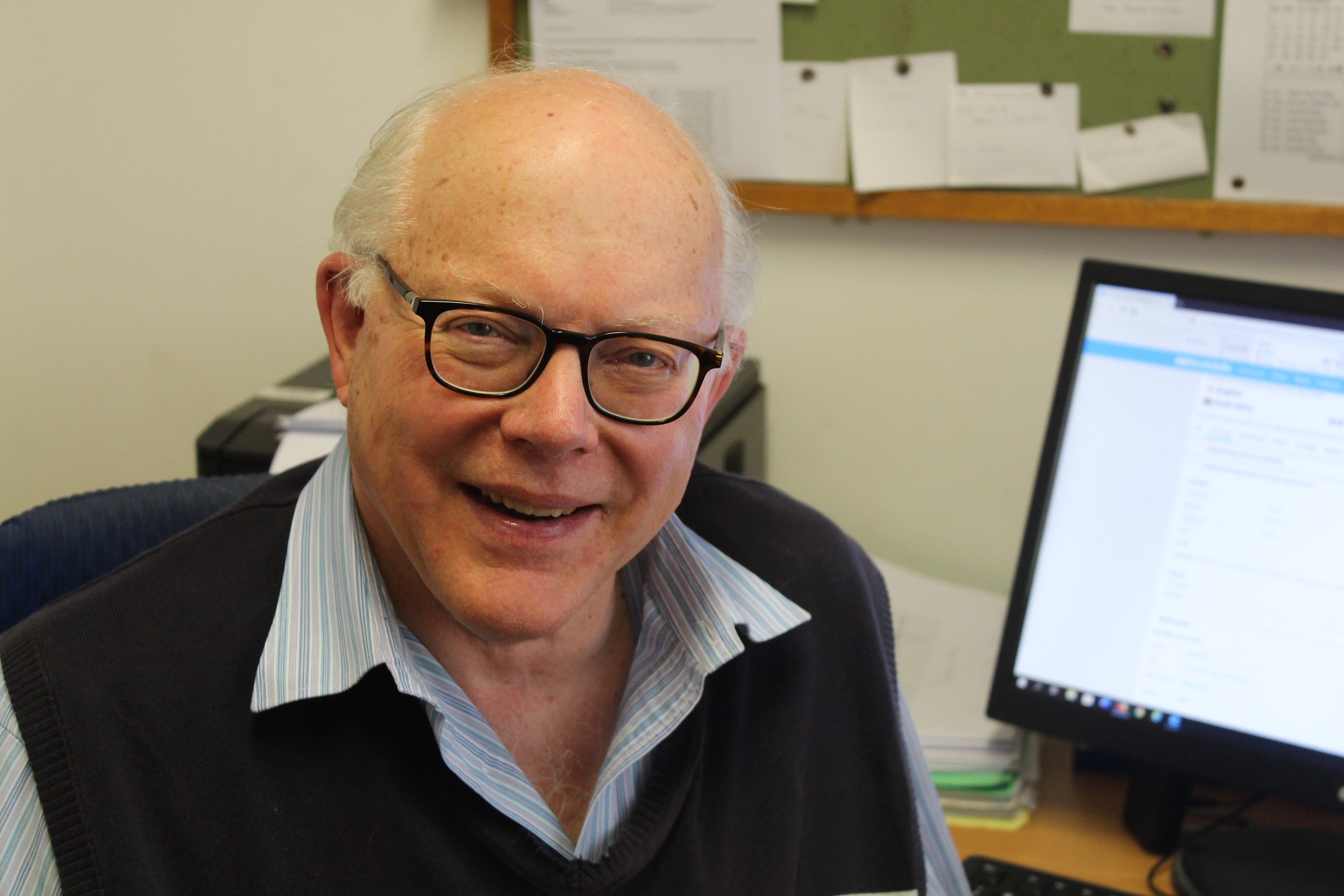 Later this month, Professor Doug Butterworth will be formally honoured by the Emperor of Japan with the Order of the Rising Sun for contributing to the sustainable management of the very lucrative bluefin tuna fishery. In 2008, Butterworth received a similar national order from the South African president, after he helped to set the benchmark for how the country’s fish stocks should be managed – an example since being taken up worldwide.

So, how did a trained elementary particle physicist who gets seasick quite easily land up in fisheries research? What led to a career of over 40 years that has included work on whales, tuna, hake, sardines, Antarctic krill, penguins and the like, and 30-odd research projects as director of the Marine Resource Assessment and Management (MARAM) Research Group at the University of Cape Town (UCT)? It’s one that has led to some 250 articles and chapters in books, over 1500 technical reports and even participation in international court cases.

“It was opportune. I entered the field at just the right time. It was basically an accident,” as Butterworth tells it.

Actually, it all started quite serendipitously in 1979, and particularly with a question.

Back then, Butterworth was in his early thirties, and a recent PhD graduate from the University of London in the UK. Opportunities in elementary particle physics were scarce. Therefore, after a four-month lecturing stint at the then University of Natal, he was employed for his applied mathematics skills by the South African Sea Fisheries Branch in Cape Town in 1977, upon the suggestion of one of his former lecturers who was interested in oceanography.

Working in the same department was marine mammal expert Dr Peter Best, co-leader of new whale sighting surveys initiated by the scientific committee of the International Whaling Commission (IWC). The aim was to improve the estimates of the abundance of the populations of various whale species found in the Antarctic.

Two decades earlier, a handful of scientists in the UK and Canada had started to realise that it is both possible and important to “count” fish and marine mammals – if one has the necessary data and models at hand. Doing so would allow scientists to be more specific about whether marine stock was dropping in size, and consequently, if changes in permit regulations or catch limits (“quotas”) might be needed.

One afternoon in 1979, Best walked into the recent appointee’s office seeking advice: “I have this simple mathematical problem related to how we estimate whale abundance from these sightings data. Am I doing it right?”

Best got more than he had ever anticipated.

Butterworth gave Best’s figures one glance, and true to form remarked: “Yes, you could do it like that. But there’s a better way, you know.”

“That was my big break,” Butterworth reminisces years later about the developments and highlights of his career.

“Estimation of marine animal abundance using surveys was still a new field back then. We were feeling our way in the dark too, because the associated statistical aspects were only starting to be developed,” he acknowledges. “Remember, a survey is not a census, but rather a sample, in the same way that you’d take an opinion poll. You have to make an estimate of abundance from that.”

A few months later, Best took Butterworth to a meeting in Seattle in the US, where the who’s who of the whale research scientific community were gathered. By then, Butterworth already knew his way around the Antarctic survey data and was called on for his interpretation.

“And that really gave me my international break, which was important to gain recognition,” notes Butterworth.

With the exception of his two years at the Sea Fisheries Branch, Butterworth has subsequently spent his whole academic career at UCT’s Department of Mathematics and Applied Mathematics. Throughout, whales have been a major part of his career as a very application-focused mathematician. He has a wealth of anecdotes and side stories about the politics, ethics, infighting and etiquette surrounding the whaling issue, having recently attended his 39th consecutive annual meeting of the scientific committee of the IWC.

In the late 1980s, Butterworth and then PhD student Andre Punt (now head of the School of Aquatic and Fisheries Science at the University of Washington in Seattle) competed in a competition of sorts with research groups from Iceland, Japan, Australia and Germany. The aim? To develop the best possible approach and computer simulations to guide decisions by which to set safe levels of whale harvests.

“We reasoned that we’d rather wipe out a population on a computer than in reality,” smiles Butterworth.

Available whale data were not as precise as all would have liked. When the groups later worked together, they, therefore, agreed on possible models spanning ranges of uncertainties.

Butterworth remembers the task at hand: “Our formulae had to work when our understanding of the abundance and growth of a whale population was right, and also when this was wrong. They had to self-correct through so-called feedback control.”

Their combined efforts resulted in simulations and formulae that handled the uncertainty associated with data on whales much better.

“The previous approach was something like ‘how much we can catch based on our best model of the population?’” Butterworth explains. “The new approach meant rather working directly with the abundance indices and their trends. If these go up, then catches may be increased; if they go down, they need to decrease. That’s overstating it, but that’s what it came down to. The difficult part was by how much to increase or decrease.”

By the early 1990s, the groups’ work was completed, but the implementation of this so-called “management procedure” approach was delayed for political reasons in the IWC. According to Butterworth, “games were played” between those for and against the practice of whaling.

Setting the standard for fisheries management

In the process, South Africa – with Butterworth leading the charge – became world leaders in using the approach for fisheries management.

“Yes, management procedure principles were originally developed for whales, but are essentially general in their applicability,” explains Butterworth, who is among others a fellow of the Royal Society of South Africa.

This way of looking at things allows the precautionary principle – which aims to minimise risks and protect fish stocks in the face of incomplete knowledge – to be incorporated into management decisions. Butterworth has since helped over 30 countries, international fisheries management bodies and fishing industries to implement these principles, and has also been involved in aspects such as assessments and management of their own fisheries.

In the 1990s Japan and Australia were having a “highly political, massive fight” about how much of the world’s lucrative southern bluefin tuna stock could be caught sustainably. Butterworth’s involvement with north Atlantic bluefin tuna and New Zealand’s orange roughy pathed the way for him being roped into the international debate.

The manner in which to interpret data from the catch rate information provided by the fishing industry was hotly debated. The Australians wanted to cut catches. The Japanese rooted for exploratory fishing experiments to resolve uncertainties, which would have meant taking more catch.

Neither side wanted to budge. One scientific meeting of 11 days set a world record for the longest discussion ever in trying to agree on an agenda. Two and ¾ days were wasted over one agenda point – about whether to discuss experimental catches (for which Japan had requested that half a day be allocated) or not!

The turn of the century saw Butterworth being formally asked to work together with the Japanese in the Scientific Committee of the Commission for the Conservation of Southern Bluefin Tuna. Back then, this was quite unusual for the Japanese, who tended to keep their discussions amongst themselves.

“I was one of the first ‘outsiders’ in whom they had sufficient confidence to include on their delegation,” Butterworth remembers the path that would ultimately lead to him receiving the Order of the Rising Sun, an honour that has been in place since 1875, and counts the designer of the Eiffel Tower as one of its recipients.

Butterworth calls much of his work “scientific litigation”.

“There is always uncertainty in the inexact field of fisheries science. You have to consider that carefully, and as a scientist give balanced advice. In the real world, ultimately a decision must be made. Often scientists can assist diverse groups in reaching consensus through a principle-based approach,” is his recipe for highly charged matters.

He gives a tiny snort: “Certainly, there’s good science being conducted, but within the backdrop of other machinations going on.”

That’s because fisheries are fraught with controversy. This has its pros and cons, says Butterworth: “It’s a disadvantage because it normally involves politics and vested interests, which confuse and prolong the debates. The advantage is that it focuses the mind on real and often serious problems. And in that way ultimately better science results.”

Confrontation is therefore often par for the course. People hold strong positions; for some large amounts of money are at stake, while others react to sentiment. Attempts at undue influence and advocacy are frequent. And the politicians get pulled from side to side as well.

According to Butterworth, one needs a very particular skills set to do the job well: “It’s for people who are adept mathematically and who are able to pick up concepts from other fields. Because your work is to be used in practice, you must be prepared to promote it beyond the purely scientific arena. And you are dealing with a discussion format that may be highly confrontational and robust.”

He adds: “What’s that glorious phrase? ‘We had full and frank discussions’. This comes just short of saying we barely managed to save ourselves from throwing rotten tomatoes at each other.”

Then he puts out a dare: “I defy anyone to come up with a field that interacts with more different professions than we as fisheries researchers do”.

“One works right across the spectrum, from industry to environmental NGOs, with all playing different games regarding the interests which they attempt to promote,” Butterworth summarises the networks in which he has found a firm footing over the past four decades.

A rethink about giraffes