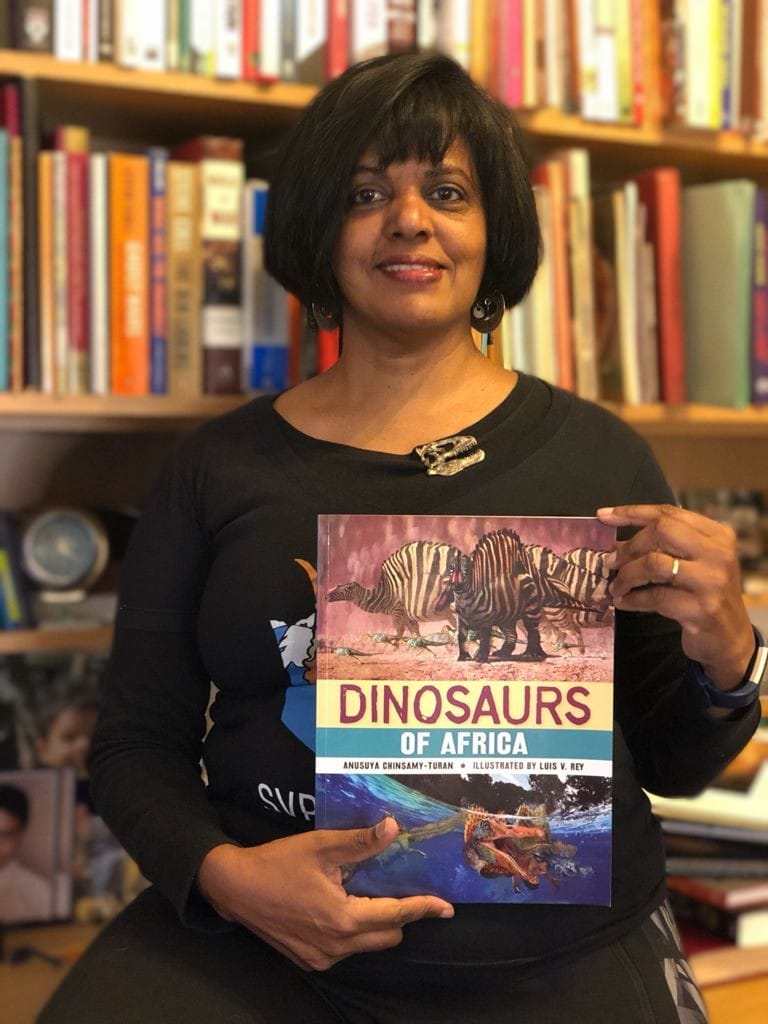 Cape Town paleontologist Prof Anusuya Chinsamy-Turan is as at ease in front of international academic audiences talking about her research into the microscopic structure of fossil bones than writing books for children about dinosaurs and other fossil finds. In 2008 this science communicator of note, who previously received an award as South Africa’s top female scientist, wrote her first children’s book “Famous dinosaurs of Africa”. An updated version, “Dinosaurs of Africa” was published earlier this year.

Scibraai asked her a few questions about it.

Is this a reprint, or was it updated?

This is an updated version of my much loved “Famous Dinosaurs of Africa” book. There has been such a lot of new discoveries and new information about African dinosaurs in recent years, so I was delighted to have this opportunity to tell everyone about this. One of the coolest discoveries has been the evidence suggesting that Spinosaurus was well adapted to living in water!

Who is the book aimed at?

The target audience is children. Older kids will be able to read all the text, whereas younger kids will enjoy the beautiful illustrations and will be able to follow the text that is read to them. Note that there are multiple layers of information. For instance, besides the main text, there are blocks of fun facts, unsolved aspects etc.

Why did you want to write the book?

Why do you think it is important that children learn more about dinosaurs, and African ones in particular?

I think it is important for children to realise that dinosaurs are not only found in North America or China or Mongolia, but that right here in Africa we also had a wonderful array of dinosaurs! Our South African dinosaurs are also globally important since they help us understand the early radiation of dinosaurs, and many of them are also helping us to understand how the long neck dinosaurs (sauropods) got so enormous!

What was the most fun part of the book?

I really loved telling the story of each of the dinosaurs, i.e. how they were discovered, what did people think when they found them, and how by studying them we know so much more about their lives as living, breathing animals.

And the most difficult?

Since I am generally so busy with my research and teaching responsibilities, for me the most difficult thing was to find the time to write!

Tell us a bit more about the illustrations.

I have been so fortunate to have worked with Luis V. Rey. He is a fantastic illustrator who studies the dinosaur anatomy and reconstructs them in wonderful, vivid colour and in striking poses!

I hear younger readers can expect another book from your pen.

In September 2021 I have another children’s book coming out with Dorling Kindersley (DK). This book is entitled “Dinosaurs and other prehistoric life”. It will be suited for young kids (and those that can read for themselves). There is much less text, and the pages are dominated by beautiful fossils and reconstructions. This book takes us on a journey through time – from the earliest life forms on earth through to the times dinosaurs reigned, and then on to mammals, and to recently extinct organisms (like the dodo).