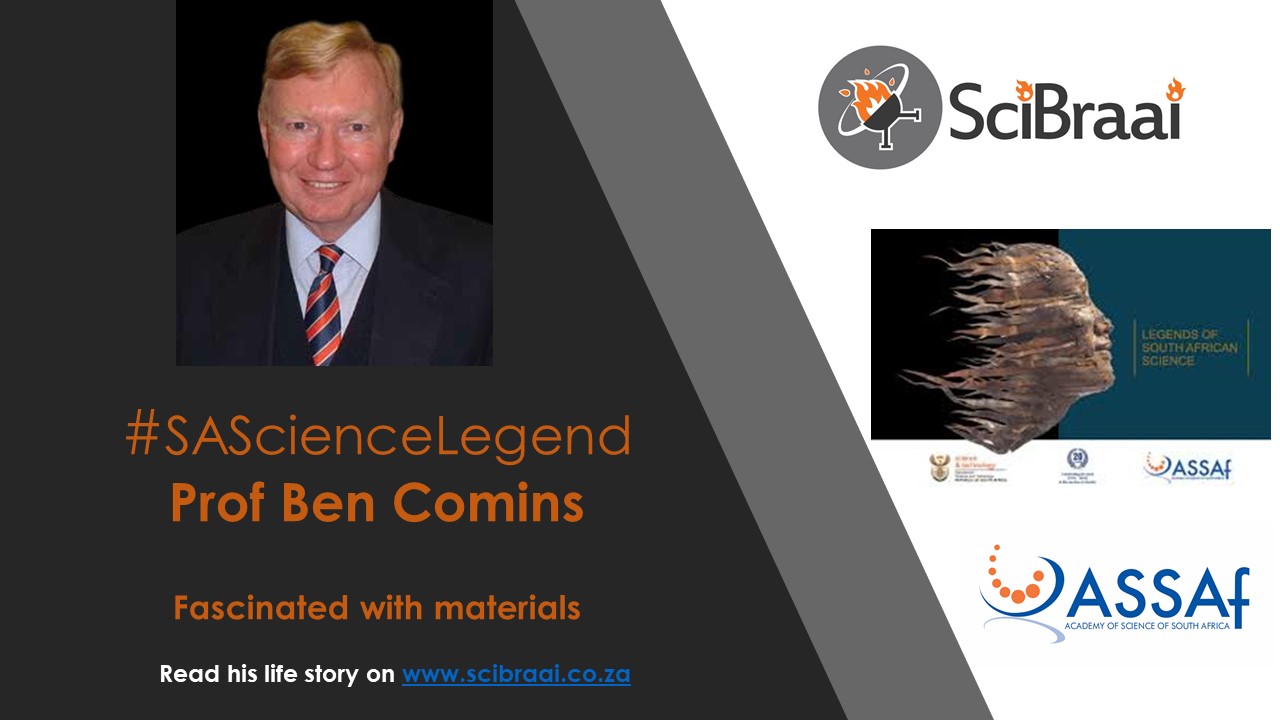 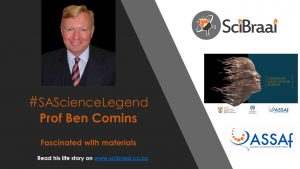 Darrell Comins was born in Pietermaritzburg on 10 June, 1942. Attending Merchiston Preparatory School and, later, Maritzburg College, he followed what was then the traditional classics course – English, Latin, history, Afrikaans, mathematics and physical science. With a broad spectrum of interests and a strong creative streak, Comins reflects that he could quite easily have elected to pursue a career in law or the arts. However, he also had a flair for science, and enjoyed the experience of making things.

He was particularly adept at building and flying model aircraft, and this was rewarded with a gold medal in the South African Games as well as the Victor Ludorum award at the South African Model Aircraft Nationals. He also built a high-fidelity stereo record player from scratch when these were in their early days. “This was also the era of the rapid development of science in many spheres, and this seemed to offer the best option for me,” he says of his decision to focus on science as a career, citing such developments as the work being done on the Space Programme. Subsequently, Comins enrolled for a BSc in physics and applied mathematics at the University of Natal (Pietermaritzburg), which he obtained in 1962. A year later he completed his BSc (Hons) degree in physics with distinction.

What people do not know: His broad interests in both the arts and science and the unforgettable experiences from travelling widely and the appreciation of cultures of other countries.

Relocating to the Transvaal, Comins became a PhD student in physics at the University of the Witwatersrand (Wits) in 1964, also working in the latter stages as a temporary lecturer in the Department of Physics. Graduating with his PhD in 1970, he was offered a postdoctoral fellowship at Queen’s University in Kingston, Ontario. Thus, he spent the next year in Canada, returning to Wits in 1971 as lecturer in the Department of Physics. He has remained at Wits ever since. He was promoted to senior lecturer four years later, and in 1981 attained the rank of Associate Professor. During this period, he spent time in the United Kingdom while on year-long sabbaticals – first at the Clarendon Laboratory in Oxford in 1976, and, nine years later, at the Department of Physics of the University of Bath.

Having distinguished himself in his field, Comins was promoted ad hominem to the position of Professor of Optical Spectroscopy of Solids in 1990. In 1993, he advanced to the Special List for Professors. In 1994, he was appointed as Acting Head and subsequently Head of the Department of Physics until 1997. He was also involved with the Schonland Research Centre for Nuclear Sciences at Wits, holding the position of Chairman of the Search Committee for the Chair of Physics/Directorship from 1994 to 1996, and in 1997 serving as the Chairman of its Interim Governing Committee, overseeing the restructuring of the Centre.

In 1997, Wits and the National Research Foundation (NRF) established the Wits-NRF Raman and Luminescence Laboratory as a NRF Facility with Comins as Director. In 2003, he was appointed as Professor of Solid State Physics at Wits, also taking up the role of Chairman of the Materials Physics Research Institute. The following year, he was appointed as Director of the Department of Science and Technology (DST)/NRF Centre of Excellence in Strong Materials (CoE-SM), a position which he held from 2004 to 2007.

The centre was established as a major South African research network hosted by the University of the Witwatersrand, in partnership with MINTEK and the South African Nuclear Energy Corporation (Necsa), as well as four other South African universities, and deals with the prediction, design, evaluation, development and exploitation of strong materials. He remains active in the research and supervision of students as Emeritus Research Professor, a position he has occupied since 2008.

In his productive career as a researcher, Comins has applied his energies to the study and understanding of materials including their structural, vibrational, electronic and defect properties. To this end, he developed laboratories to provide a variety of optical techniques, including optical absorption and luminescence and Raman and Brillouin laser light scattering spectroscopy. These techniques provided the experimental core of his work and were adapted to extreme conditions such as low and high temperatures and at high pressure.

In earlier years, his work was directed primarily towards basic research. He contributed to the understanding of the mechanisms of radiation damage in alkali halides using both experimental and theoretical approaches. His work on radiation effects was expended by using ion beam implantation of various materials. Studies of fluorite-structured superionic compounds provided important insights into the complex, defect-mediated processes leading to their anomalous high-ionic conductivity.

New directions followed his establishment of surface Brillouin scattering (SBS), extending the Brillouin facilities already unique in South Africa, and permitting the study of surface acoustic waves in opaque solids. These led to the extraction of their elastic constants and hence mechanical properties. Pioneering studies with SBS at high temperatures and high pressures were carried out on several different materials together with his postgraduate students and collaborators. Studies of nanoparticles in different systems were investigated and the temperature dependence of the vibrational modes of single-walled carbon nanotubes was studied.

The award of the CoE-SM and his appointment as Director opened a new chapter in Comins’ research work. “Strong materials are those that maintain their distinctive properties such as hardness and toughness, high mechanical strength and stiffness, wear, corrosion or radiation resistance under extreme conditions such as very high or low temperatures, high pressure, adverse wear or chemical conditions or damaging radiation,” he explains.  “The choice of my area of specialisation has been materials physics which includes fascinating and challenging science which has proved never ending in its scope but also combines extremely important practical aspects and applications,” he notes. “For a country such as South Africa with its vast mineral resources these aspects are of great importance.” Understanding the nature of these materials is critical to industries such as mining or manufacturing, where the appropriate use and handling of such materials influence the quality, efficiency and financial viability of the end product.

Of this area of study, and the expertise of the members of the CoE-SM, Comins has been quoted as saying, “It is an exciting field in which to work because it brings a range of researchers together, including chemists, engineers, metallurgists and physicists to collaborate on projects that lead to the cross-fertilisation of ideas across disciplines.”

These research activities are aimed at improving the materials currently in use by industry, as well as developing new, better-suited ones. The knowledge created through these efforts can be applied to industries within South Africa’s borders, as well as globally.

In pursuing these objectives, Comins worked mainly with collaborators and students associated with the CoE-SM. The elastic constants and engineering moduli of materials with high temperature applications were determined with SBS. These included rubidium (a platinum group alloy) and titanium carbide in which both materials are associated with South African mining.

Studies of the elastic properties of thin supported films were initiated by his visit to the University of Kaiserslautern, Germany where he studied the elastic properties of tungsten carbide films using SBS. These films have wide applications as wear-resistant and protective coatings. Comins introduced these techniques and equipment at Wits and produced a number of thin films with practical applications together with colleagues who also developed major film characterisation equipment.

Comins with a colleague and students studied the properties of synthetic polycrystalline diamond used in tools for precision cutting, and in the mining and oil and gas industries. Using Raman spectroscopy the stresses as a function of tool geometry and temperature were measured and fatigue type processes were studied. Three-dimensional mapping of stresses in plastically deformed diamond was achieved.

Comins also studied corrosion processes in iron. Studies were conducted in situ using a specially designed electrochemical cell permitting Raman microscopy of the iron surface while statistical methods determined the relative amounts of the individual iron oxides. The results provided new knowledge on composition of the passive film, the role of water and the processes of pitting. In separate studies the inhibition of copper and iron corrosion was carried out with various inhibitors.

Defining moment: In his academic career, the recognition of his research achievements by the award of an A-rating by the National Research Foundation.

Comins has been a keen mentor to his students throughout the years, at Wits and abroad. He counts this interaction with passionate young people as being one of the most satisfying aspects of a university career. He enjoyed the challenge of the classroom scenario, teaching undergraduate students, as well as having put much of himself into the supervision of postgraduate students, particularly those of disadvantaged communities.

He has supervised students at Wits from South Africa, Portugal, Ireland, UK, Romania, China, Zimbabwe, Kenya, and Ethiopia and while abroad, mentored students in France and Germany. His students have reaped the benefits of his investment in them, many going on to hold senior positions in their workplaces, with many others receiving awards for the work they have done. “It has been a privilege to watch students develop their knowledge and skills, display their originality and enterprise and their sense of achievement in science,” he enthuses. Under his supervision, 21 students have obtained PhDs or MScs, and he continues to look forward to a number of others graduating.

Who are the big names in South African science?