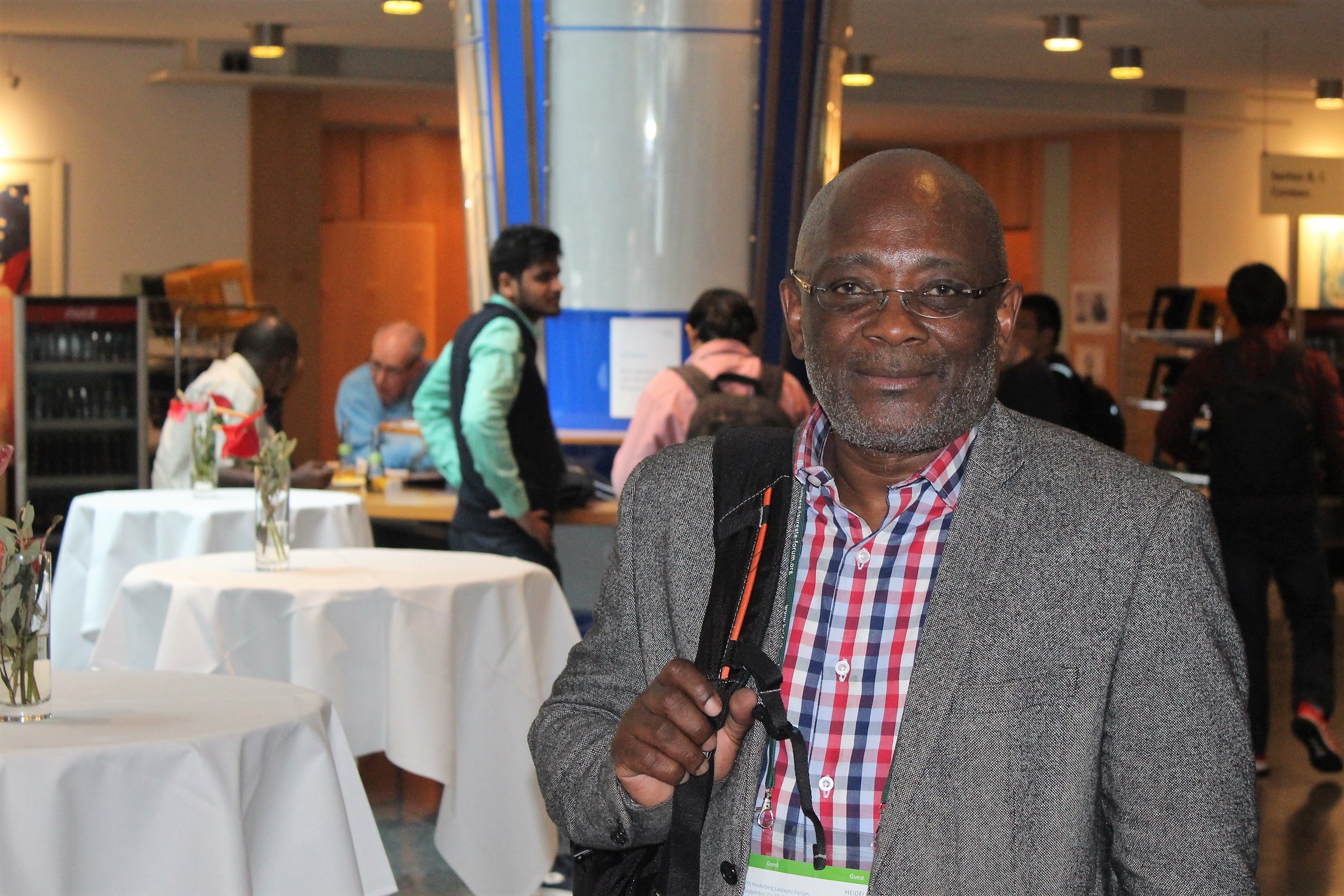 Being colourblind put a stop to Prof Loyiso Nongxa’s youthful aspirations of becoming a chemist or a doctor. Because of his eye defect, he really struggled with some of the basic experimentation and laboratory work required during his undergraduate studies. He then turned his attention to the symbolic black-and-whiteness of mathematics. A loss to the chemistry world, however, turned out to be a win for mathematics and South African academia.

Nongxa would go on to receive his PhD in mathematics, establish the Centre for Mathematical and Computational Sciences at the University of the Witwatersrand, and serve a whole decade long as the institution’s vice-chancellor. Last year, he retired as professor and chairperson of the National Research Foundation.

He was the one that his fellow pupils at Healdtown College near Fort Beaufort turned to him to run them through their science subjects. Sometimes he even had to set the tests that they all had to write. Nongxa, from Indwe in the Eastern Cape, matriculated in 1972 as top matriculant in South Africa.

Premedical studies at the University of Fort Hare followed, but by his third year Nongxa realised he needed a change of plan.

“I had a holiday job at an analytical laboratory in Cape Town. They put me onto titration. I knew the theory, but they said I was hopeless,” he can now laugh at the memory of how he struggled to perform the analytical method that relies heavily on noticing colour changes between fluids.

For the rest of his three weeks in the Cape, he ended up being the skivvy to someone doing a first-year diploma at the local Technikon.

“I knew that I knew more about the chemistry than he did,” he still remembers the slight.

The experience was a tipping point in Nongxa’s career. He finally realised that he was much more at peace working on a maths problem, and that laboratory work actually stressed him.

His colour blindness, ultimately, made him chose a different career path. On a lighter note, it has had some other drawbacks too.

“I’m hopeless at birdwatching. I cannot distinguish between various shades of brown, blue and pink. Sometimes they look the same,” he reveals. “And when my daughters were still small, I even sometimes struggled to read some of the numbers in their colourful children’s books.”

Nongxa tells the story of how he became a mathematician after we had both been listening to a panel discussion on gender and minority representation in the maths and computer science spheres. It was presented as part of the 7th Heidelberg Laureate Forum in Germany. The weeklong gathering provided 200 young researchers from across the globe the opportunity to interact with a whole host of past and present winners of the world’s most important prizes in mathematics and computer science.

“It’s a very interesting concept, bringing together outstanding achievers in Mathematics and Computer Science to serve as inspiration to the next generation,” Nongxa noted when reflecting on the presence of academic luminaries such as the developers of cryptography, the internet and computer graphics at HLF2019.

Nongxa doesn’t like thinking of himself as such, but he too is a trailblazer and an inspiration to many of the young researchers who attended the Forum. In 1978, he became the first black South African to receive a prestigious Rhodes scholarship (now known as the Mandela Rhodes Scholarship) to study at Oxford University. He received his doctorate in mathematics in 1982.

Last year, the now retired professor put another first behind his name. He became the first person from the African continent elected to the executive of the International Mathematics Union (IMU), an institution that has been around since the 1920s. His position as one of two vice-presidents among others sees him liaise with the recently established International Science Council – of which fellow South African and mathematical mind Prof Daya Reddy is the first president.

In 2000 he left his post as Dean of the UWC Faculty of Natural Sciences to take over the reins at Wits, first as deputy vice-chancellor for Research and by 2003 as its first black vice-chancellor.

Despite now being officially retired, Nongxa is by no means sitting pretty. In April 2019 he was appointed by the then Minister of Higher Education as administrator to his alma mater, the University of Fort Hare. It’s an institution with a well-deserved place in South African higher education history, but one that is also rife with issues.

He admits that “the Fort Hare thing” keeps him up at night and causes him to be constantly making lists of priorities that need addressing. He believes that the funding model for South African universities, and how it constrains smaller universities, in part lies at the heart of the institution’s problems.

“I never thought I’d end up in administration,” Nongxa reveals.

How did it happen then that he ended up leading South Africa’s top research university for a decade, and then also the country’s major research funding body?

He tries to answer diplomatically: “You know, sometimes you see things are done by your HOD or Dean, and you kind of complain. But then you tell yourself, look, you cannot be complaining from the sidelines all the time. If you think you have better ways of doing things, then you have to put yourself forward.”

One of the chinks in his administrative armour is that he often cannot help firing off an email if he thinks someone has been “simply unreasonable”.

“I often get the advice to not send emails when I’m angry. ‘Don’t hit the send button, Loyiso, you’ll regret it’,” he mimics someone else’s voice, while all the while laughing at himself. “Then BOOM, there you have it. I do send it.”

After stepping down as vice-chancellor, he again was able to focus on his true interest: mathematics.

“There is something that appeals to me about mathematics. I am fascinated by the way people have approached and solved difficult problems. All that,” he tries to explain.

He admits to being easily bored at conferences, but not when he is attending events hosted by the International Mathematics Union. It’s his happy place.

“Usually my attention span at conferences are not that great. After two days or three days of a conference…,” he somewhat sheepishly leaves the sentence hanging. “But not the IMU’s conferences. Those are almost two weeks long. And I’ll go to lectures from the first one in the morning till the last one late afternoon. I understand 20% of the things that has been said, but I just find it fascinating.”

He says that attendees are exposed to a broad range of mathematics happening on the international stage.

“There are many broad areas of mathematics that people in South Africa do not know anything about. We are a small system, and one cannot expect we can cover everything,” he adds.

“I regret that I wasn’t a much better mathematician than I ended up being,” mentions Nongxa, who despite his lamentations held an C NRF rating in his lecturing years.

The roots of his statement, of course, lie in the opportunities that he had to make do with during his student years in 1970s South Africa, and his limited exposure at the time to different fields. When he studied maths at Fort Hare, for instance, only his one professor had a PhD. “And I did not even realise that one could do research into mathematics!”

His own story might explain why Nongxa is currently championing the formation of a consortium between local universities to pool expertise to train graduate students in mathematics, especially on a postgraduate level. The National Graduate Academy for Mathematical and Statistical Sciences has already received a grant from the Department of Higher Education and Training.

“We want to support young academics who do not have a masters or a PhD degree. We are looking at how we can introduce new areas of mathematics that are not taught in South Africa, for instance by inviting people from overseas to come and present intensive courses over a period of two weeks to graduate students,” he gives a sneak peek into the Academy’s vision. “We are also exploring partnerships with British universities to core supervise PhD students especially in areas where we do not have expertise.”

His teaching genes kick in when he states: “These days the buzz word in South Africa is the 4th Industrial Revolution. But we cannot have that if we do not pay attention to the sciences, and the mathematical sciences of computer studies, statistics and mathematics.”