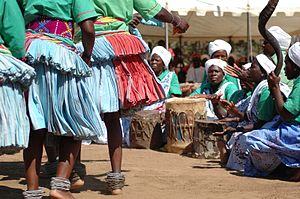 There is nothing arbitrary about how Vatsonga people of Southern Africa receive their names. This is because a name isn’t seen as just an ordinary label provided for the sake of convenience to distinguishing one person from another. It is carefully thought out and considered in advance.

“Xitsonga names are not just mere tags but provide more insights into important social, cultural and political events at the time of birth,” writes Mkhacani Chauke of the University of Venda in the journal Anthropologist.

“To the Vatsonga names come through the machinery of naming, determined by a variety of factors beyond their control. As such, there is a strong belief that a name-giver should consider the close ties between naming and identity,” he adds. “The name-giver chooses a name that truly identifies the child as a person.”

“A name is considered a precious and marvellous gift while a person without a name is regarded as a non-human being,” he adds.

Names have a specific meaning to every nation since names convey the history and culture of that particular nation while also evoking memories of love or bitterness within members of that nation. Names reflect the way in which people think and see the world around them.

Vatsonga women play an important role in this name-giving. Children are often named after their dead ancestors so that the latter may be near the child and protect him or her from all evils. They even visit traditional healers to find out which name is suitable for a child. Some Vatsonga think that by naming a child after their ancestors they will receive blessings while others think that the child will be an outstanding member of the society.

Like other African people they also make use of different naming practices to give names to their children. Names are bestowed according to certain circumstances, such as the circumstances surrounding the birth of the child, social aspects of the family, hopes, traditional beliefs, and wishes for the child, or the expression of gratitude to a deity. Parents may name a child after their late parents because of the love they had for them, thereby feeling as if their parents were still alive. Sometimes children are named after their paternal or maternal relatives because of resembling their physical appearance.

“At present many tribes are losing much of this inheritance in an attempt to adopt Western culture wholesale,” adds Chauke.

He writes: “Modern parents prefer to cultivate a spirit of onomastic individualism or creativity and search for a special, perhaps unique name for their child, like Vulombe (honey), Nsuku (gold), Nhlangano (togetherness), and Ndzalama (gem). They prefer to choose names for aesthetic appeal or to satisfy a personal whim.”