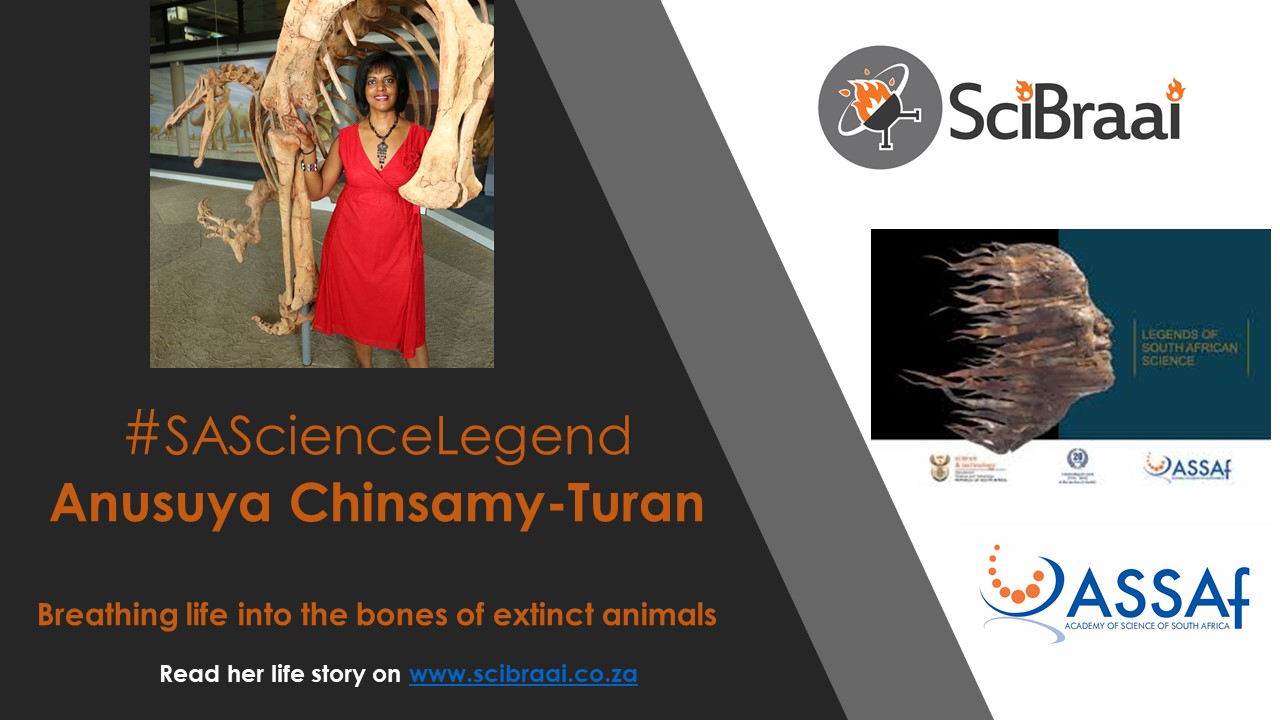 Professor Anusuya Chinsamy-Turan (@Palaeo_Prof) was born in Pretoria, the youngest of three daughters. After matriculating from Laudium High School, she wanted to become a science teacher because education is part of her DNA. It is the profession followed by her eldest sister and her father, a headmaster, and several others in her extended family.

In the 1980s apartheid years, tertiary study options for Indian South Africans were generally limited to the University of Durban-Westville. Motivated by her father, Krishna Chinsamy, she applied to study at the University of the Witwatersrand (Wits), which was one of the more liberal white universities at the time.

A little white lie on her admission papers later, almost seems prophetic. When applying for special ministerial consents, black students had to provide a reason for wanting to attend a so-called white university. Chinsamy-Turan wrote that she wanted to study palaeoanthropology, for which Wits has always been renowned.

Back then, she had no inkling that one day she would become a palaeontologist. With her heart set on becoming a high-school science teacher, she just wanted access to a good degree in the sciences at Wits.

For her Honours in Zoology, Chinsamy-Turan had chosen a project that involved a study of the development of the trachea or windpipe in mice. The project involved the sacrifice of pregnant female mice and a dissection of the embryos. “I absolutely hated it with such a passion that it made me decide that I did not want to ever do any experimentation on living animals,” she says with emphasis.

Luckily, she found solace in palaeobiology. “Instead of killing something, here I would be able to reconstruct something long-dead as a once-living animal,” she remembers.

Defining moment: The decision to pursue postgraduate studies in palaeontology rather than becoming a teacher.

The supervisor of her MSc, Prof Mike Raath, introduced her to the emerging field of fossil bone histology, which is preserved even after millions of years of fossilisation. It has allowed Chinsamy-Turan to combine her background and interest in zoology, biology and histology to study extinct animals. Her MSc was upgraded to a PhD, which she obtained in 1991.

Chinsamy-Turan has since spent much time peering down a petrographic microscope looking at ultrathin slices of fossilised bone. It is all about com- paring them with those of living animals to work out how particular dinosaurs grew and lived. “Like a detective, we use every single clue that is preserved in the fossil record to try and reconstruct extinct animals, such as dinosaurs.”

“Bone preserves the texture and the signals that tell us how these animals actually grew,” explains this board member of the Jurassic Foundation, an American-based grant programme for young palaeontologists and especially postgraduate students that was set up as a spin-off from the original very successful Jurassic Park movie.

It is about much more than just putting an age to specimens. The actual growth dynamics of the fossilised animal is recorded within the microscopic structure of fossilised bone – similar but not exactly like those of tree rings. “The microscopic nature and texture of the bones tell us how fast the animals were growing, if they were affected by disease, or what the influence of seasonality might have been on their growth,” Chinsamy-Turan explains the basics behind the particular field of palaeoscience detective work in which she is involved.

She believes it is relatively easy to spot disease or pathologies in fossil bones. “If you know what is normal, then you can easily recognise abnormalities when you see them.”

In 2014, for instance, she co-authored two papers showing that dinosaurs suffered from diseases that had manifested in their bones, such as infections. In the same year, she was also part of an international team that described Changyuraptor yangi, a 125-million year old dinosaur fossil with long tail feathers found in China. It is one of the several discoveries of new species that she has been involved in.

Chinsamy-Turan still remembers the moment she peered through the microscope at a thin slice of a fossilised bone of a Mesozoic bird one late morning in 1993. It was towards the end of her first postdoctoral year at the University of Pennsylvania in the USA, and at the time she was already one of the few people with expertise in fossil bone microstructure. She started collaborating with Luis Chiappe, then of the American Museum of Natural History, to examine three specimens of early birds from Argentina.

“Immediately, when I looked at the sections of bone under the micro- scope, I knew that our findings were significant – a breakthrough, a Nature paper,” she recalls the impression that the specific organisational structure of the bone had made. These early Mesozoic birds were growing more like their dinosaurian relatives, rather than modern birds.

These findings were introduced to scientific literature in Nature in 1994. By 2016 Chinsamy-Turan counted seven papers in Nature/Nature Communications/Scientific Reports among her more than 85 peer-reviewed publications. Chinsamy-Turan has worked on dinosaurs and other fossils from various localities in South Africa, Africa and other parts of the world. For example, along with her students and postdoctoral researchers she has contributed much to understanding the biology of South Africa’s famous mammalian reptiles that eventually evolved into mammals.

She also has a particularly soft spot for the derived meat-eating dinosaurs that are close to the origin of birds. Because these dinosaurs, and early (Mesozoic) birds are not found in South Africa, she often collaborates with colleagues from China, Argentina and the USA.

Chinsamy-Turan is fascinated by these ‘transitional’ groups. She is engaged with questions about how the long-necked dinosaurs evolved from their basal ancestors, how birds evolved from non-avian dinosaurs and how mammals evolved from mammal-like reptiles. She is currently collaborating on efforts to work out how early sauropodomorph dinosaurs gained their massive size and gave rise to the gigantic and iconic long-neck dinosaurs that so often hoard the limelight. The early radiation of these dinosaurs is particularly well known in South Africa and Argentina.

Telling science as it is

Her life in academia started in 1988 at the Bernard Price Institute for Palaeontological Research at Wits when she was appointed as a part-time junior lecturer. She completed her PhD during this time.

After finishing her postdoctoral fellowship in the USA, Chinsamy-Turan and her husband moved to Cape Town in 1994 where she took up a position as specialist scientist at the South African Museum. A secondment to UCT for 50% of her time followed in 1997, during which time she also served as Associate Professor in the Department of Zoology. Because of her commitment to science communication/promotion, she took two years leave of absence from UCT to serve as Director of the Natural History Collections at Iziko Museums in Cape Town. In 2002, she returned to UCT in a full-time capacity and was promoted to full Professor in 2003.

To her, life is however more than just about climbing the ranks. She regularly instigates and leads science-related awareness campaigns, and has over the years been involved with numerous outreach projects, lecture series or poster campaigns. She has served on the editorial board of the popular science magazine Quest from 2004 to 2015. She has chaired the Advisory Board of Scifest Africa, South Africa’s annual science festival in Grahamstown, and helped to develop dinosaur exhibitions in Cape Town and Tokyo. Interesting content and titles of workshops or lecture series such as “Sitting Ducks or Charging Bulls” and “Conquerors of the Air” has made her a popular speaker worldwide.

The example of her charismatic postdoctoral advisor, Peter Dodson, influenced the way in which she tackles the business of telling others about her research and science in general. Chinsamy-Turan, the successful science communicator, also has much to do with her said educator DNA.

Her first book contract – for The Microstructure of Dinosaur Bones: Deciphering Biology through Fine-scale Techniques published in 2005 – came about thanks to her ability to talk about her work in a clear, yet insightful way. These are skills she believes she acquired because of her Higher Diploma in Education which she obtained in 1985 from the University of Durban-Westville.

After giving a talk at the annual conference of the Society of Vertebrate Palaeontology in New York, an editor from Johns Hopkins University Press complimented her on her excellent oral presentation. “Wouldn’t you like to write a book for us about it?” came the request.

This dedicated mother took up the challenge, and wrote her first book in the evenings once her two sons were in bed.
In this, as in most other things she takes on, her ability to plan and execute stood her in good stead. That, and of course the support of her husband, an engineer and Managing Director, Yunus Turan, which she describes as “essential”. She has so far penned four books – two academic books and two popular books – contributed many a chapter of various scientific and popular texts and has written many popular articles too. Her second academic book, The Forerunners of Mammals: Radiation, Histology, Biology followed in 2012.

Good-humouredly Chinsamy-Turan remembers how excited her sons’ young friends would be to meet their “dino expert mother”. With the publishing of her two books aimed at younger readers, her fan club has grown beyond the borders of Rondebosch and the UCT campus.

First came Famous Dinosaurs of Africa in 2008 (now in its second run), and then Fossils in Africa in 2015. The first has its roots in the two-year leave of absence she took in 2001 and 2002 to work as Director of the natural history collection division at Iziko Museums in Cape Town. During this time, she was instrumental in developing several new exhibitions, and she did the background research and application for the National Lottery funding for the African Dinosaurs Exhibition that opened a few years later.

EXTINCTIONS: PAST AND PRESENT (Lecture 1 of 5) Prof Anusuya Chinsamy-Turan https://t.co/oqvrGjuTqB

She’s known as a good planner, a motivator and someone to whom especially other women scientists turn for advice. This former Vice-President of ASSAf and President of the South African Women in Science and Engineering (SAWISE) was also at the helm when the Department of Biological Sciences at UCT was formed
through a merger of two departments.

Being a board member of the Jurassic Foundation and Chair of the US-based Society of Vertebrate Palaeontology’s prestigious Romer-Simpson Prize are among her current commitments. She is after all a person who delivers on what she promises. “When I start something, I must finish it.”

Ultimately, it’s her job and the various aspects thereof that keep her going: to breathe life into an extinct animal and to find enough detail so that its life’s story can become as real as possible.

“Each fossil has a unique story that needs to be told,” she says.

People might not know that she loves baking, and has a very creative alter ego, with handicraft abilities, and can do anything from knitting, pottery, photography and mosaic work to jewellery-making.