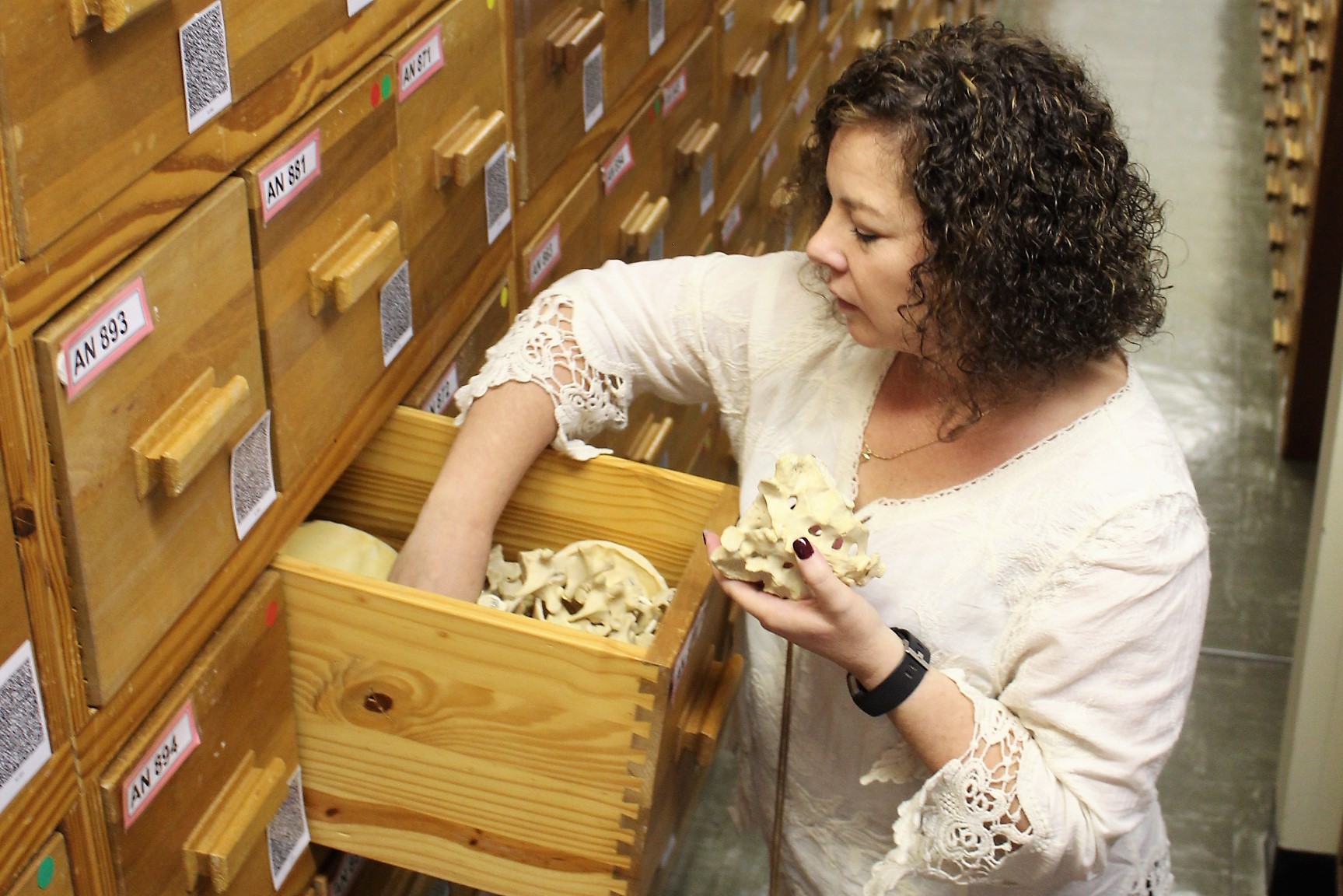 As part of her PhD in Anatomy, Mandi Alblas regularly visits Stellenbosch University’s Kirsten Skeletal Collection. Like an accountant she packs out, photographs and tallies each of 206 bones in each of the 700 skeletons included in her study – 144 200 bones in all.

There’s something moving about the way that Mandi Alblas switches between personal pronouns while she walks me through some of the skeletal remains of children on display in the Medical Morphology Museum at Stellenbosch University’s medical campus.

“Do you see her teeth? The set that is already there above the milk teeth, waiting to drop down? This is her jaw, and this is his,” Alblas explains while fitting two jaws neatly to the skulls laying on a display case. “These were still children.”

“Are you actually able to determine a child’s sex based on what their skulls look like?” I incredulously ask.

“No, no,” she quickly sets me straight with her characteristic broad smile. “I always say that they ‘speak’ to me. In this particular case I don’t necessarily have a good reason for saying one is a “she” and another is a “he”. This skull just looks more like a girl’s, and this one more like a boy. But it isn’t necessarily the case at all, and my gut feeling isn’t always right.”

This lecturer in the Division of Anatomy and Histology often helps the South African Police Service and the Forensic Pathology Services of the Western Cape to piece together missing links about the identities of unidentified skeletons found in the Western Cape.

A few minutes earlier she had explained that it is reasonably easy to determine the sex of adults, and how a pelvic bone contains many clues to doing so. She also mentioned that a young person’s age can be ascertained by looking at their hand bones.

After years of doing forensic anthropology work, she makes a point of quite deliberately clearing her mind before starting on a new case. “I have to check myself, because one has to look at everything before coming to conclusions,” comes her professional explanation.

“I don’t want to know anything about the case in front of me other than where and how high above sea level it was found, and what the temperature was like when I look at the rate of decomposition. I don’t want the clothes to influence my decision on the sex of the victim, for instance,” Alblas sets out how she goes about doing a biological profile estimate that takes into account a person’s estimated age, sex, ancestry and stature.

She works through various tick sheets, gleaned from years of following forensic anthropology short courses on among others death scene archaeology, the interpretation of bone trauma and pseudo-trauma in cases of suspected violent deaths, and the various lab methods that can be used to identify human skeletal remains.

We walk up the museum’s stairs to the University’s Ossuary – in essence a room full of skeletons, all filed, boxed and labelled as if in a library. It is home to the Kirsten Skeletal Collection, which since the late 1950s has formed an important part of the training programme of Stellenbosch medical students. Many of the bones on display in the Medical Morphological Museum come from this collection. 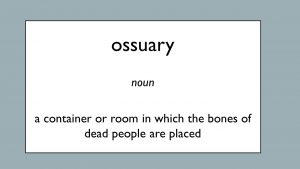 It contains 1161 complete skeletons that in general reflect the profile of the Western Cape population. Over the years, people have donated their bodies as their way of contributing to future anatomy training and scientific research. In many other cases, remains were donated by the Western Cape’s Inspector of Anatomy after a waiting period during which the body of a person who died in a local hospital was never claimed by relatives. Many passed away because of natural causes such as heart attacks or cancers, and many more due to curable diseases such as tuberculosis and pneumonia.

“It would be great if more people would consider donating their remains in such a way, because they become valuable tools in science,” urges Alblas. “With permission from the families, the skeleton of these known cadavers is curated in the ossuary for further osteological training and research. We use every part of the body.

She quickly adds: “The staff and students understand the value of body donation and treat each person donated with dignity.”

The cadavers are for instance used to help medical student to understand the relative normal human anatomy as part of their quest to become well-trained future doctors and surgeons.

“The best way to learn anatomy is to work on the real thing,” says Alblas. “Virtual anatomical models cannot teach you the difference between an artery and vein – skills you need by the time you open up your first patient.”

Since 1957 ossuary curators have added pertinent and available data about the remains in the collection into a desk-sized log book. A full skeletal inventory has been set up in recent years as part of an electronic database by Mrs Linda Greyling, head of the SU Anthropology Research Unit. Work has also started on adding QR codes to each of the wooden shelves, to allow quick access to information.

From the birth and death records of each of the cadavers it has been established that 41,8 percent of those in the collection died between the ages of 40 and 60 years. Most were born between 1920 and 1950 – the mid to late 20th century, therefore.

“In comparison, the Raymond A. Dart collection at the University of the Witwatersrand in Johannesburg represents mostly a population from the early to mid-20th century and the Pretoria Bone Collection at the University of Pretoria, also a mid- to late 20th century population,” Alblas explained the significance of the collection in a recent paper about it in the South African Journal of Science she co-authored with colleagues Linda Greyling and Elsje-Marie Geldenhuys.

Under guidance of Prof Ben Page, former head of the Division of Anatomy and Histology, the Kirsten Skeletal Collection has become not only a training tool for students, but also a valuable resource for researchers. It has been used for instance to take stock of interpersonal violence in the Western Cape, and to compare the outer layer of bone (known as the cortical layer) and spongy bone tissue (known as trabecular bone) of men and women.

As part of her PhD in Anatomy, Alblas regularly visits the well-lit ossuary, a stone’s throw away from her office. She’s become quite the expert on its contents. She for instance knows that Wooden Box No 713 contains a person whose sternum had been stapled together after heart surgery, or that Box No 542 includes the bones of a man whose skull cap shows traces of cancer having spread through his body. In Box No 698 there’s a woman whose ribs were broken but never quite set properly again, while Box 476’s inhabitant probably suffered a lot of pain because of recurring infections in his legs.

Like an accountant she packs out, photographs and tallies each of 206 bones in each of the 700 skeletons included in her study – 144 200 bones in all, therefore. Each bone is scrutinised in detail. Alblas, who is a member of the International Association of Legal Medicine and the Forensic Anthropology Society of Europe, adds notes about any peculiarities to a spreadsheet. 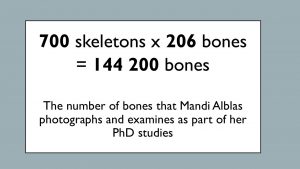 It’s a painstaking task, but Alblas is luckily the meticulous type who loves putting things in their right places. She uses the skeletons in the collection to learn more about the medical history of those who have lived through the 20th century, and to see if specific patterns emerge. “I’m looking for signs of trauma and of specific conditions such as cancer, degenerative diseases and metabolic conditions, and for signs of infections, malnutrition and anaemia.”

She is also drawing up comparisons between specific timeframes in history, such as the Second World War, the Great Depression, during and after apartheid, and before and after antibiotics became available.

“I do so to see whether the availability of better health services over the years has in fact also been to the benefit of people from lower socio-economic ranks,” she explains. “Many of those included in the Collection come from poor backgrounds.”

Of special interest is that the Kirsten Skeletal Collection comprises the largest documented cadaver-derived skeletal collection of South Africa’s coloured population in the world.

“Why does the race epithet matter?” I ask. “Are we not all the same?” 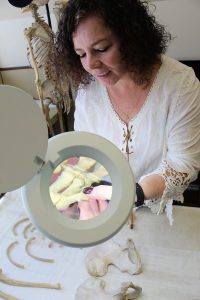 She starts explaining how information about the specific metrics of people from different populations and nationalities are continuously being included in databases, for example, FORDISC software used by forensic specialists from across the world to piece together clues about unidentified skeletons.

“The South African coloured population, with its Khoi and San history, is size-wise notably different from most others,” she explains. “The same measurements used for people from European descent therefore do not apply to them. We need to add new regional and ancestral specific standards to the database to make it comprehensive and complete.”

Alblas hopes the details contained in her work – and in the Kirsten Skeletal Collection itself – will in future help bring closure to the loved ones of missing persons and allow forensic teams to successfully put a name to a skeleton found in an unmarked grave, or scattered underneath bushes anywhere in the world.

Glenda Gray: guided by the needs

Testing for anti-HIV drugs – one indigenous plant at a time