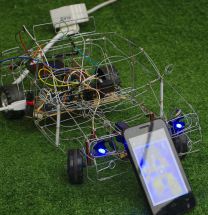 Adam Oxford of the tech website htxt.africa visited Tshwane University of Technology to find out how to take a wireworks car (“draadkar” in Afrikaans) to the next level.

There’s nothing unusual about wirework model cars: roadside craftspeople and shops in tourism hotspot sell them by the beaded bucketload. How, then, to make yours stand out if you’re an enterprising young artisan today? Add a couple of motors, working steering and an Arduino Uno board with Bluetooth transceiver and you’ve got yourself a remote controlled car that may not be the fastest we’ve ever seen, but it’s certainly the most original.

Tshwane University of Technology students Isaac Hlengane and Solly Khoza built the car, and the coup de grace – or should that be coupe de grace? – is that you control it using a mobile phone app. Truly this is traditional artwork updated for the 21st Century.

If only someone would hack robotics into one of those carved giraffes, or create a tweeting jacaranda wood salad bowl: surely it can’t be long?

We caught up with Khoza and Hlengane for a demo at Arduino Day in Pretoria last weekend. Here’s some of the other robots, hacks and students that were on display.

* The original article appears on HTXT and is reused with permission.

Xenophobia in SA: How prejudice is born