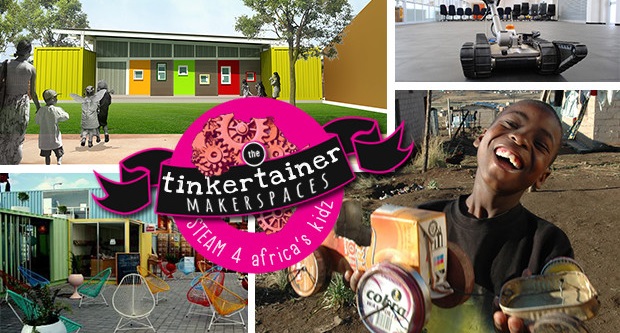 Young people such as Cable Maharaj have proven that they can be counted among the top brains in the local MakerSpace, which is why a project called TinkerTainer wants to help unearth more talented youths by building South Africa’s first portable kids’ MakerSpace hubs.

TinkerTainer aims to build MakerSpace hubs around the country where kids – particularly those in townships – with an interest in and aptitude for science, technology, robotics and electronics can learn more about the MakerSpace, where they can generate ideas for and create their very own projects.

An Indiegogo campaign has been launched to raise $15 000 (around R180 000) for the resources needed to get the first TinkerTainer hub up and running in Cape Town.

“There is currently a serious lack of suitable facilities, up-to-date resources and activities in South Africa that promote constructive engagement among children of all walks of life. Due to this, especially in the poorer areas, many are drawn into a life of gangsterism, drugs and crime which is a virtually impossible life to walk away from,” the campaign page reads.

TinkerTainer hubs are made of recycled 12m x 6m shipping containers that are affordable and easy to make and distribute. Inside each container are tables, chairs, computers, 3D printers, robotics and electronic components, workspaces and etching equipment.

Kids will be able to participate in TinkerTainer programmes for free and will also receive a warm meal at the hub.

TinkerTainer’s Chantelle Schmidlin says she wants the initiative to not only be an educational advantage for kids, but also help them become entrepreneurs and earn something from the projects they make.

“I don’t want TinkerTainer to rely on donations and funding forever, but would rather see it grow into a self-sustaining business, funded by a percentage of the earnings from the products and projects the team of educators and children create,” Schmidlin says.

“With this end in mind, every project tackled will be marketed in an online store on completion. My vision is for teams to be guided toward tasks that address and solve specific problems in their communities and immediate environments. The kids will then develop, build, code,  test, tweak and improve the solutions they dream up and ultimately sell or license to governments, organisations, communities or individuals who need them.”

At the time of writing, TinkerTainer had raised just $85 (R1 033) of its goal, and has 27 days before funding closes. But because it’s a flexible funding campaign, TinkerTainer will still get all the money pledged from backers even if it doesn’t hit its target, so every little bit will help.

Testing the boundaries of trauma