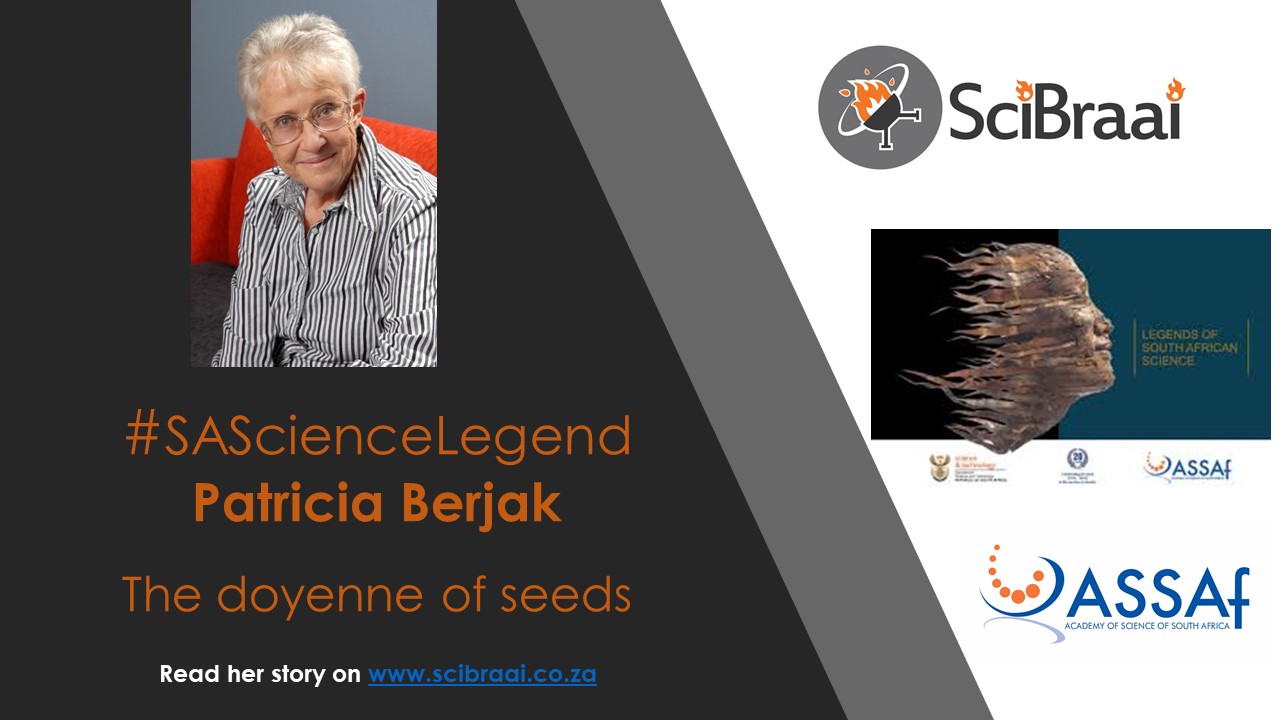 However, while at the University of Natal studying under the biologist-tutor Trevor Villiers and working as a junior lecturer in plant biology, Berjak was introduced to the domain of seeds and electron microscopy. Here she found her true vocation as a cell biologist. In 1969, she completed her PhD in seed biology, examining the ageing of stored maize seeds. While much of her later research focused on recalcitrant (desiccation-sensitive) seeds, her doctoral thesis investigated orthodox (desiccation-tolerant) maize seeds, a staple food in much of Africa. These degrade when stored under warm, relatively high humidity conditions that also encourage fatal fungal growth in the seeds. Berjak’s doctoral research discovered the means to significantly reduce fungal growth in maize seeds, where the growth of mycoflora is associated with poor storage conditions. This allows maize seeds to be stored for substantially longer periods, which in turn contributes to increased food security.

DEFINING MOMENT: Probably when she realised that analysing urine in test tubes was not exciting science and she moved into seed science.

Her findings went on to form a major chapter in a definitive work on the subject by EH Roberts, Seed Viability, as well as five papers from her doctoral thesis being published internationally.

This was followed by a three-year period in the United Kingdom, where she held the post of experimental officer with lecturing duties at the University of Leeds, returning to South Africa in 1973 in the capacity of senior lecturer in biological sciences at the University of Natal. She was appointed as full Professor in 1985, periodically serving as Acting Head of department, as well as in the capacity of the Head of the Division of Biological Sciences.

She was later appointed as the Deputy Head of School, and in 2005 was made Professor Emeritus.

Her major research focus was in the field of non-orthodox seed biology, particularly in the area of seed desiccation sensitivity (or ‘recalcitrance’). Recalcitrant seeds, unlike orthodox seeds, contain moisture and are destroyed when they dry out. Some of these recalcitrant species are essential food and traditional medicinal sources in Africa, with some examples of these plants including mangoes, litchis, avocados, coconuts, cocoa trees and rubber trees. Orthodox seeds, for example maize seeds, are dry and can be stored for long periods before supplying water which allows them to germinate and grow into mature plants. Recalcitrance diminishes the storage ‘lifespan’ of the seeds of a significant number of seed-bearing species.

Throughout her illustrious career, Berjak would investigate the range of factors associated with the storage of such seeds: the optimal conditions for this, the germplasm cryopreservation of species producing these seeds and the minimisation of damage to seeds to which conservation techniques have been applied. She was also pivotal to the development of synthetic seeds (synseeds) as a means for short-term storage and distribution of axes recovered from cryopreservation. Her work often bisected disciplines, ranging from the molecular to the ecological spheres in order to enrich understanding of the phenomenon of seed recalcitrance.

The ultimate goal of this research was the enhancement of the storage potential of such seeds with beneficial applications in the fields of biodiversity as well as food security, a critical area of study in the developing world. This was accomplished through in-depth investigations relating to the cell biology and manipulation of these species for optimal germplasm conservation and subsequent distribution of recalcitrant seeds; the manner in which these seeds would respond to stress; problems in the propagation and germplasm conservation of heavily exploited African plants; and the contribution of associated mycoflora (fungi) to the reduced storage lifespan of these seeds. Part of this was the exploration of seed-fungal relationships in the storage of orthodox seeds, including seed pathology, fungal transmission and attempts to eradicate the mycoflora. The research on non-orthodox seeds included extensive work directed to the conservation, particularly by cryopreservation, of the genetic factors of species producing recalcitrant seeds which makes them inherently non-storable; this work reduces the risks of extinction of these plants.

Armed with the knowledge gained through these endeavours, Berjak’s research has been instrumental in refining storage practices of seeds, thus diminishing the risks posed by fungi in the deterioration of these seeds, and developing the application of cryobiology principles to the long-term conservation of the plant species that produce recalcitrant seeds.

During a sabbatical period in the early 1980s, she was able to work in the laboratory of Professor JS Clegg at the University of Miami. At the time, Professor Clegg was exploring methods to characterise the states of water in animal cells and tissues. This coincided with Berjak’s aims to apply similar methods to the study of water in desiccation-sensitive seed material, an objective she was unable to realise locally due to the limited facilities at her disposal in Durban at that point. However, later she was invited to the United States Department of Agriculture – Agricultural Research Service (USDA-ARS) National Seed Storage Laboratory (NSSL, now known as the USDA-ARS National Centre for Genetic Resources Preservation), where she was able to pursue these investigations during several separate visits alongside Dr C Walters (formerly Vertucci). Thereafter, she was able to found a complementary biophysics laboratory in Durban, which IPGRI (now Bioversity International) identified as an international centre of excellence.

This collaborative work yielded several publications and presentations at conferences, abroad as well as locally. More importantly, Berjak wrote, those investigations furthered understanding of the thermal behaviour of water in desiccation-sensitive seeds which, in turn, could facilitate recalcitrant germplasm cryopreservation on a predictive basis.
She entered into numerous research collaborations spanning a number of continents, investigating the responses of seeds from a diverse range of climates, including wild rice in the USA, Picea in Canada, pine in South Africa, and desert plants in Namibia, amongst others.

In 2000, Berjak spent a productive period with colleagues in the Applied Plant Physiology Department at the Université Pierre et Marie Curie, Paris, where collaborative efforts were focused on the unusual phenomenon of the comparative desiccation tolerance of wheat coleoptiles. Berjak’s microscopical expertise (contributing to a paper in Physiologia Plantarum) indicated that intracellular compensation and repair mechanisms, which are unexpected in desiccation tolerance in higher plants, might be the basis of the phenomenon.

In mid-2005, a three-year award was received from the UK government’s Department for Environment Food & Rural Affairs (DEFRA) Darwin Initiative for a cryoconservation centre of excellence (CCESSA), in conjunction with the Millennium Seed Bank (MSB). This was coordinated by the Royal Botanic Gardens, Kew with the ultimate objective of establishing cryobanking for plant genetic resources for sub-Saharan Africa.

More recently, Berjak was a major driver in initiating networking in the Southern African Development Community (SADC) region aimed at excellence in seed and plant germplasm banking in line with objectives embodied in the African Union/New Partnership for Africa’s Development (AU/NEPAD) Consolidated Plan of Action for Science and Technology (2005). She was also involved in plans for establishing a consolidated banking system for plant genetic resources in conjunction with the existing Wildlife Biological Resources Centre/BioBankSA at the National Zoological Gardens (NZG) based in Pretoria. The prototype of this plan, presented in the UK at the Society for Low-temperature Biology’s meeting, Cryo2010, resulted in the South African ‘cryo-team’ (UKZN and Wits) being invited as members of the UNESCO Chair in Cryobiology.

Not only a prolific researcher, Berjak was known as an exacting mentor to her students, and took pride in the part she played in building the academic capacity of the country, across cultural and gender boundaries. She supervised 42 students pursuing MSc degrees and 18 PhD students to completion, as well as hosting numerous postdoctoral associates from abroad. Several of her students went on to receive prestigious awards and followed successful academic careers, and she maintained close ties with past students, most notably Jill Farrant from the University of Cape Town (UCT) and David Mycock from Wits, with whom she continued to collaborate on research projects. In addition to this, she published extensively in international journals and monographs, also acting as a referee and serving on the editorial board for a number of these, as well as frequently presenting at international conferences.

DID YOU KNOW? She would not get going in the morning until she had completed the Word Game in the morning newspaper. Tea must be made with actively boiling water. She devoured detective novels.There was always a bottle of ‘cold tea’ in her desk drawer for after-hours discussions.

Berjak was an active member of the academic community at the University of Natal, serving on the staff club in a variety of roles, as well as on other university committees, as well as liaising with the Natal Education Board in the development of the biology syllabus. She was also a participant in numerous other committees, national and international, such as the International Seed Testing Association (ISTA), the Electron Microscope Society of Southern Africa (EMSSA), and the International Society for Seed Science (ISSS), of which she served as President between 2008 and 2011, and several working groups in South Africa. As an active conservationist, she was involved in activities coordinated by the National Parks Board, and the Durban Botanic Gardens, among others, and served as a Board Member of the United Nations University Institute for Natural Resources in Africa from 1999 until 2008.

She served as a Member of the ASSAf Council from 2006 onwards, as well as holding the position of Vice-President.
Apart from her academic life, Berjak was a dynamic individual with a broad spectrum of interests. She was an active member of the Red Cross ambulance service in the 1960s, and was a Gold Medalist of the South African Red Cross Society. She held a private pilot’s license and enjoyed aerobatics, cooking, ballroom dancing, bridge, classic cars, photography, the English language and reading crime novels. She was also a great cat-lover.

After a short illness, she passed away in January 2015, leaving behind her devoted husband and research partner of 49 years, Professor Norman Pammenter. Her death was widely mourned and many tributes were received, attesting to the immense impact she had on the field of South African botany, and also on the individuals with whom she came into contact. raai in collaboration with the Academy of Science of South Africa (ASSAf) will feature the life stories of 53 South African science legends. These stories were all included in the 2017 book “Legends of South  African Science“. If you cannot wait for your weekly installment of Legends profiles, you can download the full book here