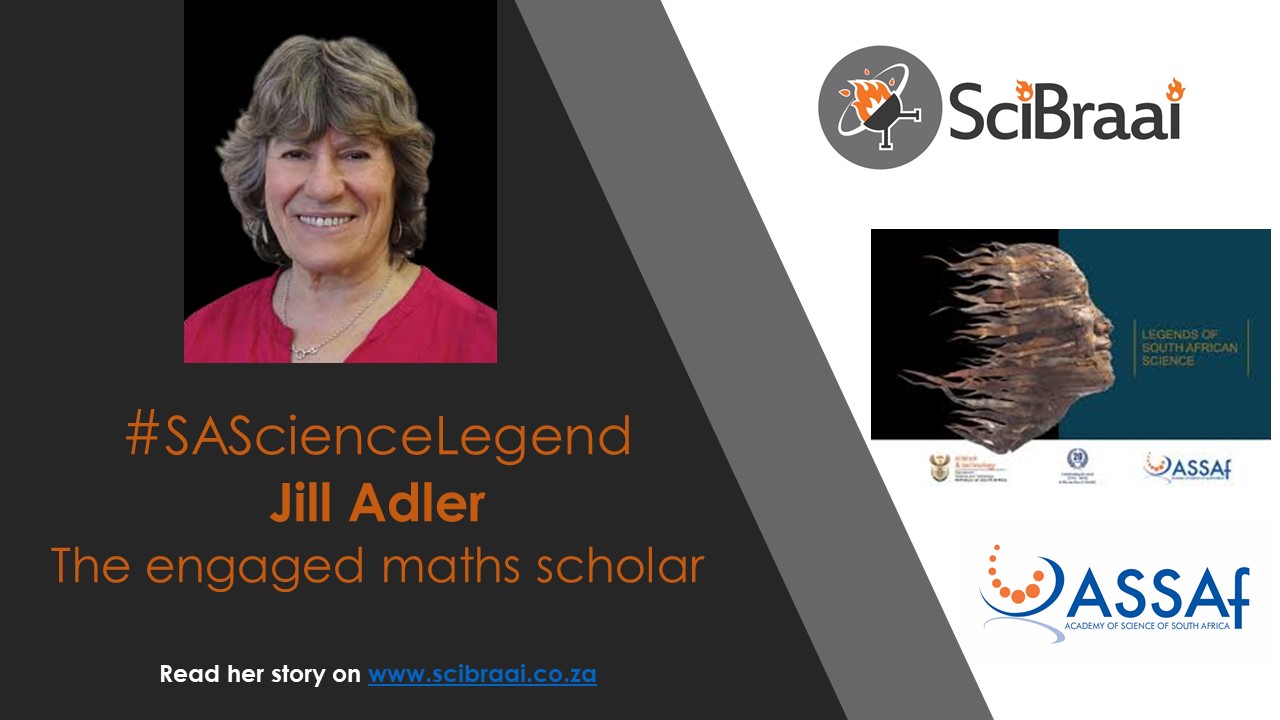 Most academics spend much of their time teaching. But few South African high-school teachers end up becoming world-renowned researchers with an A-rating from the National Research Foundation. Yet, this is what Professor Jill Adler has done. A teacher by training, an activist at heart, she has bucked many trends to become one of the world’s leading experts in mathematics education research.

Throughout her career, her focus has been on serving society. The idea of academic achievement as an end in itself does not appeal to her one bit. She makes sure the research she does speaks to teaching practice, and also that problems in teaching practice inform her research.

She currently holds the SARChI – First Rand Foundation (FRF) Chair of Mathematics Education at the University of the Witwatersrand (Wits), and simultaneously held the Chair of Mathematics Education at Kings College, London in the UK from 2007 until 2014. She is a prime example of a South African researcher doing research that is at the same time globally relevant and responding to local societal needs.

Jillian Beryl Adler (née Smidt) never planned to become a researcher. She was born in 1951 in Johannesburg. At school, she showed an aptitude for mathematics. She studied mathematics and psychology at Wits.

Her bachelor’s degree was interrupted in its first year by a year in the USA on an American Field Scholarship. She spent her time in Seattle in Washington State and it had a profound impact on her political worldview. The US at the time was seeing the peak of protests against the Vietnam War. It was in this volatile atmosphere that Adler became truly aware of the despicable politics happening in her own country. Not having grown up in a political family, she had been relatively protected from her own country’s political realities. When she came back to South Africa, she started to get involved in the struggle against apartheid.

After graduating from Wits in 1972 she spent a year at the University of Cape Town studying for her teaching qualifications. It was a straightforward choice. “I always thought that my professional career should be in teaching,” she says. In Cape Town, she and other trainee teachers resolved to go and work in so-called coloured or black schools.

Adler ended up spending two years teaching at Harold Cressy High School in the District Six area of Cape Town. The school was a hotbed of opposition to apartheid, and one of its most famous alumni is Trevor Manuel, South Africa’s  finance minister from 1996 until 2009. In 2014, the school was declared a provincial heritage site.

In January 1976, Adler went backpacking around the US and Europe, returning to South Africa in August that year. Needing to work immediately she took up a teaching job at King David High School in Victory Park in Johannesburg for the final term of the year. She did not last long at the school. While she had all intentions of returning to Cape Town, in that short period in Johannesburg, she met her husband, and has lived and worked in Johannesburg ever since.

Waking up to academics

Adler got a job working for the South African Committee for Higher Education (SACHED). She worked on distance education, especially contributing to the mathematics content for an educational supplement to Weekend World, South Africa’s first ‘black’ newspaper. However, in 1977 the apartheid government banned Weekend World as well as the whole leadership of SACHED, including one of the directors who would later become Adler’s brother-in-law. The junior staff of SACHED were promoted and Adler suddenly found herself Head of its Research and Development Department.

Adler’s interest in academic work was kindled during her time at SACHED. Through SACHED she identified a group of adults who had used her teaching materials to learn mathematics. They became the subject of her Masters thesis, in which she explored using newspapers as a medium for adult distance learning. She obtained her Masters of Education with distinction in 1985 from the University of the Witwatersrand (Wits).

Academically speaking in 1988, when my Masters research was published in Educational Studies in Mathematics, the leading mathematics education journal in the field – this was catalytic in shifting me into an academic career.

Adler then moved back into full-time employment, and was attracted by a job she saw advertised at the Johannesburg College of Education involving training primary school mathematics teachers. She applied, despite having limited primary mathematics teaching experience and to her surprise she got the job, which she began in 1986. In 1989, she moved to the Wits Department of Education as a lecturer and in 1991 embarked on a PhD.

Adler based all her academic work on what she calls problems of practice. Her PhD looked at teaching and learning mathematics in multilingual classrooms. By the time she was capped, in 1996, she had taken a leading role in pioneering the Further Diploma in Education (FDE) programme at Wits. The FDE was designed to enable disadvantaged teachers to upgrade their qualifications and at Wits the programme was focused on mathematics, science and English language teaching.

In 1997, Wits advertised for an academic chair in mathematics education, located in the Mathematics Department in the Faculty of Science. Adler applied and was successful, despite having only obtained her PhD the previous year.

“I know I was given it on promise, rather than on what I had already achieved in research terms,” she says. In this new position, she used the funds made available for the chair to set up a PhD programme, so that she could ‘reproduce’ herself. She took on a group of PhD students and supported them to develop their own area of interest, though within her broad orientation to learning as a social enterprise.

Adler’s book Teaching Mathematics in Multilingual Classrooms was published in 2001 to great national and international acclaim. Her work on multilingual learning and teaching was pioneering. At a time when communication was being emphasised as central to learning mathematics, little of the research included in its scope what this meant in a multilingual context like South Africa. Over time, Adler also came to epitomise the idea of the ‘engaged scholar’, working at the cutting edge of her field while responding to local and regional needs in education.

In 2002, the funding for Adler’s chair ended, and she became Professor of Mathematics Education, and at the same time moved to the Wits School of Education in the Faculty of Humanities. Prior to this, and while still in the Faculty of Science, Adler led the development of a new Honours programme, BSc Hons in Science Education, a programme that provided access to postgraduate study for graduates from the FDE, as well as filling a gap between the existing BEd Hons and pure mathematics (or science) honours degrees. It was clear at that time that there were many practising mathematics and science teachers who would benefit most from an Honours programme that provided for both further study of mathematics (or physics, chemistry, biology) and of education, and critically that the mathematics or science in this study was appropriate for those in the profession of teaching.

The BSc Hons in Science (and mathematics) Education has produced numerous graduates, some of whom have proceeded through Masters and PhD study, and others of whom have taken up leadership roles in their schools or in the provincial and national departments.

It was during this period that Adler, with others, raised funds for and then launched the Marang Centre for Mathematics and Science Education, a centre she has directed at various times. Marang celebrated its 10th anniversary in 2015, and over the decade has become known as a leader in postgraduate mathematics and science education in the country and the region.

In 2006, Adler became aware of the Chair of Mathematics at Kings College, London, and was encouraged to apply. At that point, she says, she was looking for a change in scenery, though when the position was offered to her, she negotiated for a joint position, half time, so that she kept a foot in her faculty at Wits. Between 2007 and 2009 she spent periods of time in London, while continuing her supervision, some teaching and research at home.

“It was very good for me to get my head into another place,” she says. In 2009, when the FRF Chair was advertised, she reduced her time in the UK to a 20% position to be able to take up the Wits Chair full time.

She has attracted a number of distinctions and awards. Adler has also received international acclaim. In 2015 she was honoured with the Freudenthal medal by the International Commission for Mathematics Instruction (ICMI) “in recognition of her outstanding research programme dedicated to improving the teaching and learning of mathematics in South Africa – from her 1990s ground-breaking, socio-cultural research on the inherent dilemmas of teaching mathematics in multilingual classrooms through to her subsequent focus on problems related to mathematical knowledge for teaching and mathematics teacher professional development” and the Svend Pedersen Lecture Award, issued by the Department of Mathematics and Science Education at the University of Stockholm, Sweden, for research that had made a significant and lasting contribution.

Throughout Adler’s career her family has always come first. Both her children are married and she talks passionately and proudly about their role and engagement as a family in social change in South Africa.

The funding for the FRF-NRF chair was renewed in 2015 until 2019, and this is now a Tier 1 Chair within the SARChI stable at the NRF. It is “a good way to end a research career,” she says.

To quieten her mind she plays Sudoku, and admits that she is a bit obsessed with the Japanese numbers game. She also reads what she calls “rubbish novels” – detective stories, crime fiction. She has joined a walking club and enjoys spending time with her grandsons.

She wants to move away from full-time work in the not too distant future, as she reaches retirement age. She says: “I’m clear that I can’t keep doing this level of work forever. I want less stress and more time with my family!”

What people do not know about Jill Adler: I was an avid netball player at school and my piano was my best friend. raai in collaboration with the Academy of Science of South Africa (ASSAf) will feature the life stories of 53 South African science legends. These stories were all included in the 2017 book “Legends of South

African Science“. If you cannot wait for your weekly installment of Legends profiles, you can download the full book here