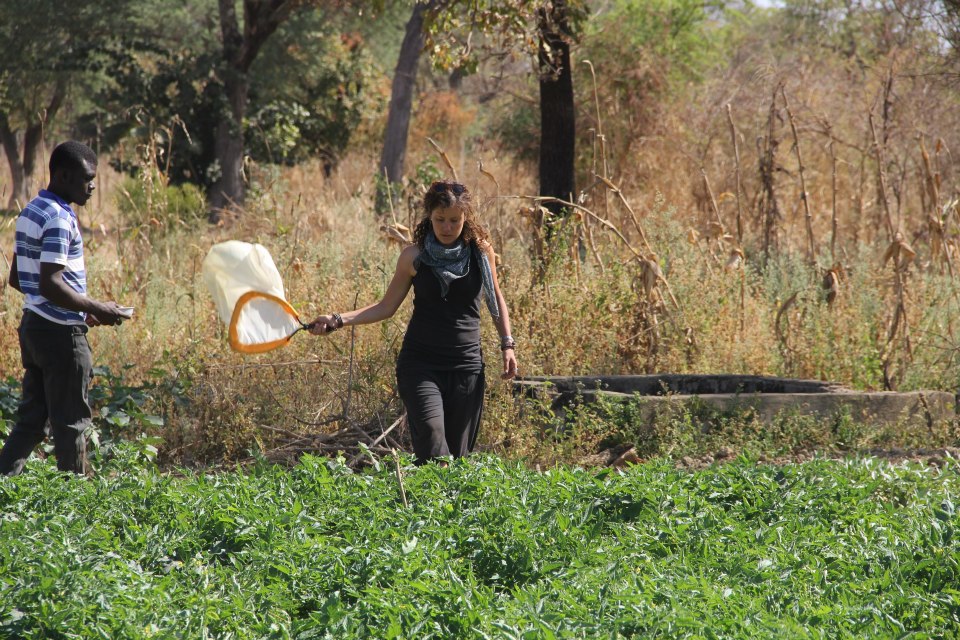 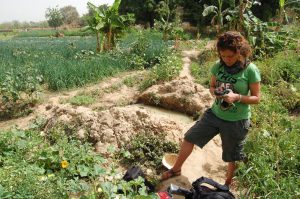 Dr Jessica Thorn was recently announced as part of the first three Women in Climate Change Science Fellows, an initiative of the African Institute for Mathematical Sciences – Next Einstein Initiative (AIMS-NEI). She will be hosted by the African Climate and Development Initiative (ACDI) at the University of Cape Town in South Africa but will spend most of her time working in Tanzania, Kenya and her country of birth, Namibia. She is currently a postdoctoral researcher in the Colorado State University in the US, after having studied at Oxford University and the University of Cape Town, and graduating from Herzlia High in Cape Town in 2003.

Scibraai asked her a few questions about how she became a climate change scientist, and the work that awaits her.

Since childhood, I’ve loved being outdoors. Later, the opportunity to travel and closely understand different cultures in an intimate way appealed to me. It’s already taken me to five continents.

I began at the University of Cape Town with a Bachelor of Social Science, with Environmental and Geographical Science and Psychology as some of my major subjects. In 2008 I received my honours degree in Human Geography. I then went on to Oxford University to complete my MSc in Environmental Change and Management in 2011, and a DPhil in Zoology in 2016. Concurrently, I worked with various disaster risk reduction, conservation and science-policy agencies, the governments of South Africa, Kenya, Ghana and Nepal, and taught university courses.

I was born in Windhoek in Namibia and spent my teenage years in Cape Town. My parents regularly took us on excursions into the wilderness, the savannah, to moonland landscapes and saltpans. I remember us going camping in the Waterberg plateau and hiking over sand dunes. As a child, I often watched riverbeds transform as the water came down during flash floods. I’ve always loved swimming in rivers.  It was during such experiences that I gained an affinity for the natural world, and a passion to promote stewardship to it. I learnt to appreciate the important impact that water scarcity or abundance have on socio-ecological resilience. It inspired me to pursue a career in climate change adaptation and community-based conservation.

I grew up in a very racially and culturally integrated environment which fostered tolerance and understanding, and community reciprocity. When I moved to Cape Town, I was exposed to the stark dichotomy of a nature reserve in the middle of a sprawling city, and the need to grabble with the issue of integrating conservation with human livelihoods. I was inspired by the activism of the poor urban dwellers of Grassy Park, Khayelitsha and Eastridge who were struggling against all odds to assert their rights as citizens and to receive housing

At the end of my bachelor’s degree years, I received the TEFL-qualification to teach English in a foreign country. I travelled abroad in 2007 and visited six South American countries in six months. Little did I know that the experience would initiate a travel bug. In the past few years I’ve work closely with local stakeholders in different countries, across sectors and scales, to gather new information. I’ve worked in conservation and international development in Kenya, Ghana, South Africa, Namibia, Peru, Nepal, India, Switzerland, and Vietnam, amongst others.

As illuminated by the current water crisis in Cape Town, we do not yet know the full economic or health impacts of ecosystem degradation. That said, it seems certain that if left unchecked, emerging stressors will exacerbate existing social vulnerabilities with urbanization, food-water-energy scarcity, and population growth. My work aims to understand the potential impact of climate change on ecosystem services, biodiversity and human well-being now and in the future.

Definitely. I am particularly interested in how  smallholder farming communities and people living in peri-urban areas around cities cope, adapt and innovate with unprecedented change  from a local-placed perception without external intervention. Climate change is not only about the environment and specific species, but also about the people in the middle of it who have to adapt to changing conditions and dilemmas to model potential pathways for “transformative adaptation” to a more sustainable world – such as space as a substitute for time, probabilistic bayesian model, ecosystem service assessments and interviews, participatory workshops and scenario planning. We believe this can better integrate scientific and traditional knowledge. We also believe, that in a world with scarce public resources available for conservation and development, it is essential that decision making of country leaders, city majors, land managers, non-profit CEOs, policy makers, investors and conservationists is underpinned by evidence. Science can have an important role to play in effectively using resources, engaging with diverse stakeholders, and managing tradeoffs between local and national priorities.

We know that the future is uncertain. When we aim to predict into the future, there are many unknowns that are difficult to account for in our models, such as non-linearity, surpassing ecological thresholds, dynamic feedbacks and uncertainties in our current data and decision-making. Nevertheless, in recent decades, thousands of scientists have been working to improve our understandings. Collectively, we can suggest that along with major economic growth, migration from rural to urban areas, and change in the demographic profile of communities (e.g. younger people moving to cities),  we will see livelihoods being transformed to more service oriented sectors.  Meanwhile, the impacts of climate variability and change will not be uniform. In rural areas, drought could mean crops fail, people loose assets, and malnourishment and stunting increases. Temperatures will increase, there will be extended dry seasons and rainfall will be much more variable, erratic and intense.  In cities business and firms in the informal sector could experience a decline in their sales, impacting urban economic growth. There will also be changes in the current distributions in pests and diseases.  It is certain there will be substantial changes in how people use the land available to them. This will require new technologies that can, for example, provide reliable and rapid mobile information as an early warnings to farmers, or energy developments that will allow African economies to leapfrog away from relying on dirty fossil fuel based sources of energy. Safety nets like insurance and income support can protect against extreme events. Agriculture will have to adopt agroecological  approaches to divert high rates of deforestation. We will have to better harvest, produce and store food, and will have to climate proof all sectors. New funding streams (e.g. via public private partnerships and foreign direct investment) will have to be carefully monitored to ensure that societies share equally in such benefits.

·       You are an active member of the Global Environmental Facility Expanded Constituency, and has contributed and reviewed The Economic of Ecosystems and Biodiversity (TEEB) and the Intergovernmental Science-Policy Platform on Biodiversity and Ecosystem Services (IPBES) reports. When did you first start reflecting on climate change?

I was working as a biologist’s assistant in a reforestation project in the Manu National Park in Amazonian Peru, home of endemic species of epiphytes (including ferns and air plants), frogs and birds such as the Cock of the Rock. Here, I observed the impact of climate change on the Tropical Montane Cloud Forests, in conjunction with land use changes for purposes such as agriculture, hunting, the building of roads and tourism. The distribution of species is rapidly changing, which in turn influences the entire trophic cascade of an ecosystem, and subsequent relations between different levels of prey and predators. I could experience first-hand how the integration of people within the natural landscape is managed, and its difficulties. I started to think more holistically about the social ecological systems in which we are embedded. I returned to the forests, Sacred Valley and Cordillera Blaca glaciers of Peru ten years later when I worked on an organic horticultural production initiative. The rapid change that had occurred in such a short period was quite obvious.

Indeed. My MSc dissertation about disaster risk  reduction in peri-urban areas took me to Kenya, where I worked with two humanitarian agencies, the UN International Strategy for Disaster Risk Reduction and the Red Cross Red Crescent Climate Centre. Our findings received international attention, arguing that informal settlements offer ideal places to analyse climate adaptation as they offer examples of the social-ecological stress being anticipated in more established societies.

In 2016, I received my DPhil in Zoology from the Longterm Ecology and Resource Stewardship Laboratory, also at Oxford. It looked at smallholder farmers who live and work in different climatic regions, and how making a livelihood and their well-being fits into the broader sphere of ecosystem services and biodiversity in which they operate. During my PhD years I was lucky enough to work as a research scientist at Kew Royal Botanical Gardens, be a lead systematic reviewer for the Centre for International Forestry Research (CGIAR) and work as a research scientist of Consultative Group of International Agricultural Research Climate Change Agriculture and Food Security. We developed and trailed climate adaptation methods, facilitated farmer exchanges, and designed training models in India, Nepal and Northern Ghana, and contributed to policies. Eleven months of fieldwork was a fascinating, eye-opening experience during which I lived in remote villages where people on average spent more than three hours per day just collecting water.

I am currently a postdoctoral research fellow working with the Natural Resource Ecology Laboratory at Colorado State University and ETH Zurich. As part of a National Science Foundation funded research project we are building predictive models of the disaster resilience of mountain communities. This means that we are building models that can predict how well certain communities are able to adapt and handle climate-related disasters such as floods, severe snowfalls, droughts and the spreading of pests. The input of the communities themselves are essential in this process, and we are working with farming ang pastoral communities in Switzerland, Tibet and Kenya.​ I project manage this Mountain Sentinels Collaborative Network, a USD5m NSF-funded network of 17 research institutes. I also lead a global systematic review by eleven researchers about participatory scenario planning in mountain social-ecological systems,

I will be combining multi-scalar institutional analysis and ecosystem service quantification with probabilistic modelling – all in an effort to understand the synergies and trade-offs that will have to be made in the ecosystems in which peri-urban areas in Namibia and Tanzania find themselves. I hope this will help advance evidence-based decision-making despite having to work within the framework of so many uncertainties and ensure more seamless links between rural and urban areas. I also hope my involvement will help increase the participation of the African scientific community in global research programs.