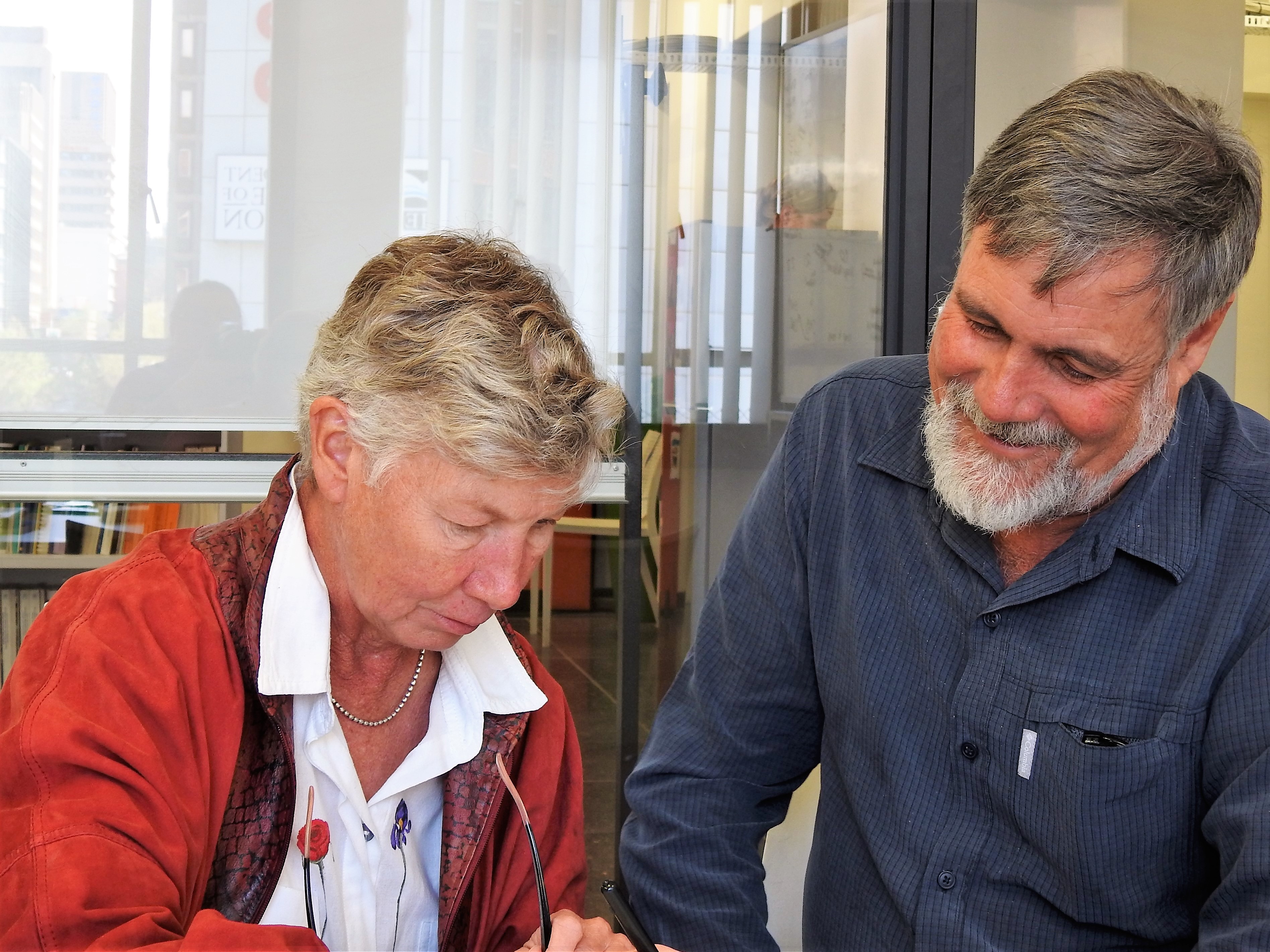 Bob Scholes first grasped the enormity and importance of climate change on Tuesday afternoon at 3:00 pm, 1986.

“It was in the library at North Carolina University,” he says. “That’s when I first encountered an article about how the global climate was likely to change as a result of human intervention. And when I read that, it was like a revelatory experience. I just knew that it was true […] and that it was the most important thing that I could work on in my scientific career.”

Climate change was still a relatively obscure subject, and Bob Scholes was a long way off becoming Robert Scholes, distinguished Professor in the Global Change and Sustainability Research Institute (GCRSI) at the University of the Witwatersrand (Wits). Bob points out that the first meeting ever held in South Africa on climate change was still four years off in 1986.

But Bob and his wife, Mary Scholes (now Professor in the School of Animal, Plant and Environmental Sciences at Wits) had – almost by accident, they say – given themselves just the right grounding to play an important part in growing our understanding of what humans are doing to the planet.

LISTEN: What should South Africa do to handle climate change?

The pair are both fellows of the Royal Society of South Africa. They had met some years earlier when both were in their first year of BSc at the Wits in Johannesburg. Over time, they became an ‘item’ but “we decided it wouldn’t be wise to do anything serious till after we had finished our PhDs,” says Mary. So they held off getting married for a while as they pursued their studies and firmed up their mutual interest in soil science. North Carolina University was then, and may still be, the leading tropical soil science department in the world, so six months of theoretical work on soil science was a boon to the couple, followed by six months in Peru for the application of that knowledge, “mostly growing rice,” she says. “We worked on the carbon balance of the Amazon looong before it became fashionable,” says Bob.

On their return to South Africa they went to work for five years at Nylsvlei, a project aimed at understanding a whole eco-system at eco-system scale, one of a set of eco-system scale studies round the world started in connection with the International Decade of Biophysical Studies. (Several of these pioneering projects were set up in South Africa, which prepared a small tranche of scientists to step up when eco-system scale work was required to understand climate change.) Eco-system scale work absolutely requires a knowledge of the soil, so both Scholes were well equipped to tackle the different spheres they were interested in.

“Bob is a large-scale person,” Mary explains. “For most of his career, he’s looked at the interaction of whole organisms, trees, grasses, animals, people. Whereas my training was on physiology, so I looked inside trees and grasses. I’m a plant physiologist, so I look at small things.”

At Nylsvlei, a team of five people including the Scholes did groundbreaking work and “cracked the savannah eco-system” as Mary puts it, because they were each focusing on special but interlocking interests (in her case, soil chemistry) and able to scale their findings up in co-operation with each other.

“So that project is technically called biogeochemistry, and was the first introduction of biogeochemistry into South Africa,” says Bob. ‘The critical thing was that the whole global change question, climate change in particular, is a biogeochemical problem. And we just happened to have got the set of skills to step straight into that problem.” In the early 1990s, they were in the perfect place to get onto the International geosphere/biosphere programme right at its onset, and “that’s really defined both of our careers,” says Bob.

The Scholes had different career interests, yet they overlapped and cross-pollinated nicely. Over the years, their focus has zoomed out more or less simultaneously, so that both began looking at bigger and bigger things, ultimately reaching the scale of earth observation systems, Bob’s interest for many years. It all came about “by accident,” says Bob. “But then most of our lives have been by accident!” Mary responds, laughing.

Accident or not, their career choices have opened the couple up to opportunities that put them right at the heart of the emerging global change science. Mary, for example, having gained an understanding of the chemistry of plants in soil, wanted to round it off by understanding the atmospheric side of things, so she went to Colorado for a year and a half at the National Centre for Atmospheric Research. “Very shortly thereafter, I joined an International Science Committee on atmospheric chemistry.” A few months later, she was asked to head the committee.

Science as a collective

Another key element was that “from just after we finished our PhDs we were engaged in a really pioneering programme called the Tropical Soil Biology and Fertility Programme, which was radical in its time, but all of its ideas have subsequently been adopted in the mainstream,” says Bob. It took a systems view of soil instead of the traditional chemist’s view. The main thing that the TSBF taught the couple was the sociological process of science, “how science worked as a collective endeavour”.

“It was a very constant, rigorous exchange of information,” says Mary, a sort of think-tank, involving input from right across the world which has continued down the years. “This was true interdisciplinarity long before it was fashionable,” says Bob. “In fact, it had elements of what is now known as transdisciplinarity, 30 years ago.” It’s about process; how do you work together. “We do eat a lot,” interjects Mary. Bob laughs, and says, “Well, we have a lot of fun!”

Dinners with international guests who were constantly passing through, accompanied by discussion, argument, laughter, even singing… all of this contributed to their understanding of team members, and therefore their ability to work together. Their son, now 22, apparently once said that “Sometimes, when I was growing up, I wasn’t sure who belonged in our house!”

As the couple moved forward into this new field, all the skills and wisdom learnt in experiences like this – as well as extraordinary international networking, which put them in the right places at the right times – would be put to work. Over time, Bob became involved in projects that demanded inter- and transdisciplinarity, in the field of scientific assessments – he was an author on the Intergovernmental Panel on Climate Change’s 3rd, 4th and 5th assessments (IPCC), and has been involved in the IPBES (Intergovernmental Science-Policy Platform on Biodiversity and Ecosystem Services), as well as groups engaged in the Millennium Ecosystem Assessment, Land Degradation Assessment and others.

Mary, in turn, has developed a high profile not only locally but internationally – her role as vice chairperson for the International Committee of Climate Change, Agriculture and Food Security is just one of the reasons she spends so much time travelling.  At the same time, she’s closely engaged in local work, looking at the complex impact of mining on the atmosphere in the Waterberg area.

Is there a way to negotiate climate change?

Bob Scholes says: “Oh, technically, yes. We’ve already overshot, and so there’s going to be quite a lot of pain before we get onto a stable trajectory – if we do – but the technical solutions exist, that’s not the problem, it’s how you implement that in a way that’s achievable.”

He goes on to say: “The emphasis in the research domain has in fact shifted out of the biophysical sciences and into the human sciences. Because we actually know more than enough about this problem to know that there IS a problem and what the outline of the solutions is. We haven’t been able to get it to occur,” says Bob. “And that’s in the domain of management, economics, politics, and increasingly, because it requires transformative change, it’s actually in the sphere of values.”

Which demands the engagement of things like as art, philosophy and faith: “This is where the core of ethical decisions and people’s world views reside. So that’s been a big learning experience and adventure – nothing in our training really equips you for that, how do you deal with this concerted action between very rational scientific approaches and very experiential and values-based, subjective approaches.”

Framing information to reach hearts is critical: “The current feeling within the global change community is that simply repeating the fear-based message has not achieved change. You actually have to have a hope-based message, no matter how slim that hope is.”

There is currently a lot of thinking in the global change community around deep transformative change – which is scary for most people, because it is by definition revolutionary.

“I think the transformative change has been slower than it could have been, mostly because people were not allowing themselves to speak across each other’s disciplinary areas,” says Mary.

But that it is, slowly, beginning to happen is evident: there is an emerging understanding of what Bob calls “the notion of system rights”. In Ecuador, the rights of nature are now inscribed in the constitution, and New Zealand offers an example of where a whole river, the Whanganui River, has been given the rights of personhood. (Our own South African rivers have rights, not in the constitution, but at the level of legislation.) The rights of the individual elements in these systems must be, in some sense, subordinate to the system on which they are reliant.

There’s a shift from transactional to relational values – privileging the relationship above the transaction, Bob explains. And this is part of a very fundamental change in our frame of thinking about the world: “You won’t persuade people to change their behaviour on the basis of facts; you will only persuade them on the basis of a profound emotional connection.”

LISTEN: The Scholes on cutting travelling time and limiting their carbon footprint.

“We’ve often worked together,” Bob observes. “And contrary to popular opinion, that is not the death knell of marital relations. It can work, provided you do have a degree of niche separation, that you’re not all over each other’s patch, and we’ve always been very careful not to work FOR each other, to avoid a direct ind of nepotistic line management situation. That was one of the reasons why I wasn’t at Wits; Mary got a position here and I went to the CSIR.”