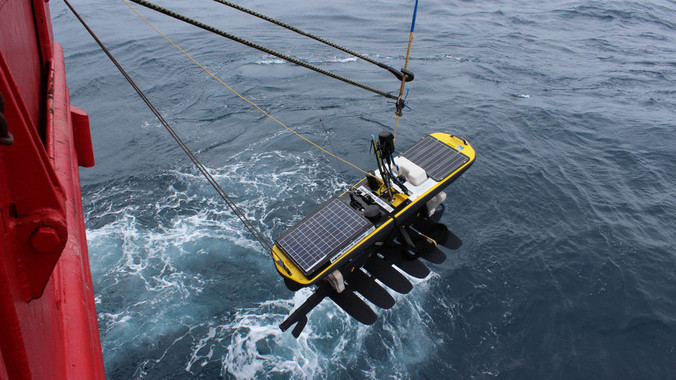 In a pioneering move, a wave glider has been sent out to sea from Cape Town to measure pollution around Antarctica. A team from the Council for Scientific and Industrial Research (CSIR) deployed this this ocean glider, which has begin its month long journey to the Southern Ocean.

“Globally, there is a renewed interest in understanding what is going on in the Southern Ocean from a climate perspective and how it mediates global climate,” says Pedro Monteiro, principal oceanographer at the CSIR and head of the Southern Ocean Carbon-Climate Observatory programme. He stands on the dock with his hands in his pockets, shoulders hunched up to his beanie, braced against the chill wind.

Although anthropogenic carbon dioxide emissions – those created by humans – are well studied and account for about 10 gigatons, the natural carbon cycle is substantially larger at 100 gigatons and is less understood, he says.

“This is the first time we are deploying a wave glider directly from the coast to head to the Southern Ocean without the use of a ship,” says his colleague, Seb Swart, as he fastens the glider to the crane.

It looks like a thick, yellow-topped, black-bellied boogie board that has sprouted antennae. There are two parts: the surface board and a submerged subsystem that comprises thick-slatted “venetian blinds”. They that are connected by a 7m umbilical cord made of a rubber composite. When in the ocean, the vertical movement between the two parts makes the glider move forward.

The glider, fitted with a GPS and a communications system, will be driven by remote control from Cape Town, whereas the first and second gliders – which took ocean measurements in the summers of 2012-2013 and 2013-2014 – were deployed by ships travelling to Antarctica. “We are missing key data from the winter conditions and variability,” Swart says.

This is why ocean robots, Monteiro and Swart argue, are the next generation of climate observation. “Ships only measure [things such as the ocean’s oxygen and carbon content, temperature, salinity and acidity] where they are. They can cover large distances, but the time span [for measurements in each place] is limited,” Monteiro says.

To read the full story, visit the Mail & Guardian site.