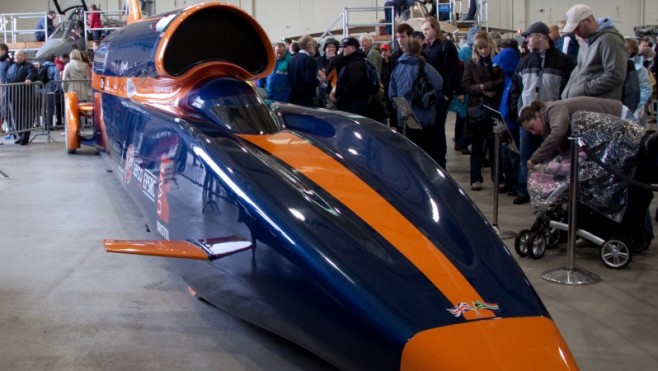 The opportunity to have a close look at a jet-powered car built to clock at 1000 mph (1600 km/h) is not one to miss. You have only until this Friday, April 24th, to view the Bloodhound Supersonic car (SSC) before it goes on its record-setting mission on a barren stretch of land in the Northern Cape in September/October.

The BloodHound SSC is currently on display at Merensky II Library at the University of Pretoria and it’s a sight to behold. It’s a fusion of car and aircraft technology, according to engineers, weighing 7.5 tonnes (7500kg), it is 13.4m long and produces a whopping 135 000 horsepower.

Andy Green, a Royal Air Force fighter pilot, will be the man behind the wheel when the the BloodHound SSC hits the track in Hakskeen Pan, not far from the Kgalagadi Transfrontier Park in the Northern Cape.

Apart from the goal of going faster than the speed of sound, this project hopes to foster interest in the fields of technology, science, engineering and mathematics among the youth and in the general population.

Bringing the BloodHound SSC to South Africa is a project by theNorthern Cape Provincial Government and the Department of Science and Technology.

You can follow the BloodHound team on Twitter for details on how kids around the world are using this ambitious project to make learning more fun. Make sure you get to the University of Pretoria for your photo op before it is too late.

Xenophobia in SA: How prejudice is born

Testing the boundaries of trauma