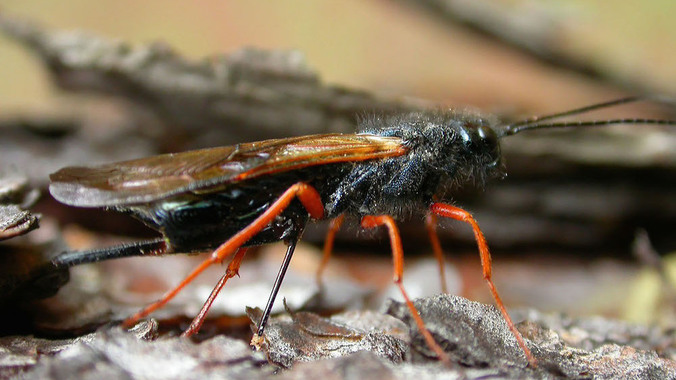 The Sirex wasp and its deadly passenger have brought the prospect of ruin to the pine industry, but geneticists have a shrewd plan to fight back.

Wasps – some black, others black and orange – are pinned to a board of blue rubber foam. One begins to twitch and you register that some of them are still alive. You almost feel sorry for them, until you realise that if they are left alive millions of trees, more than R20-billion and 17 000 jobs are at stake.

They are Sirex noctilo, a woodwasp, native to Eurasia and North Africa. First detected in the southern hemisphere in 1900 in New Zealand, this invasive pest has spread throughout this half of the planet over the last century and, if left unchecked, spells disaster for South Africa’s forestry industry.

There about 1.3-million hectares of plantation and the majority of those trees, about 51%, are pine trees, the food of choice of the Sirex wasp.

Bernard Slippers, a professor in genetics at the University of Pretoria and researcher leader of the Tree Protection Co-operative Programme and Centre of Excellence in Tree Health Biotechnology in the Forestry and Agricultural Biotechnology Institute, reaches out a fingernail and lifts the sheath surrounding the sting of one of the black wasps. The completely black wasp is female; those with orange on them, male.

“See that needle inside the sheath?” he asks me. “With that needle, she drills through the bark of a pine tree. [At its base] there’s a little sac that’s full of fungus – a very specific fungus – and in the hole she’s drilled in the wood, she will put one or two eggs, the fungus and a bit of a toxin. The toxin affects the tree and the fungus starts growing.”

And that is just the beginning. In this symbiotic relationship, this special fungus, called Amylostereum areolatum, begins to degrade the tree’s cellulose, breaking it down into sugars that the wasp larvae feed on. The fungus will continue to spread through the tree and, when the young wasps leave the tree, the females will take the fungus with them to another tree, and the process continues.

“The fungus gets very safe passage into the next tree … where there are no competitors. So it’s good for both of them,” Slippers says.

The wasp does not have predators in South Africa and can flourish unchecked.

In a book chapter called The control of the Sirex wasp in diverse environments: The South African experience, authors from industry and academia detail the spread of the wasp. The first Sirex wasp was detected in the county in 1994, in Cape Town. In 2001 it was found near Knysna. This was followed in close succession by detection in the Eastern Cape and KwaZulu-Natal in 2002.

Lus for more? Read the original at Mail & Guardian.