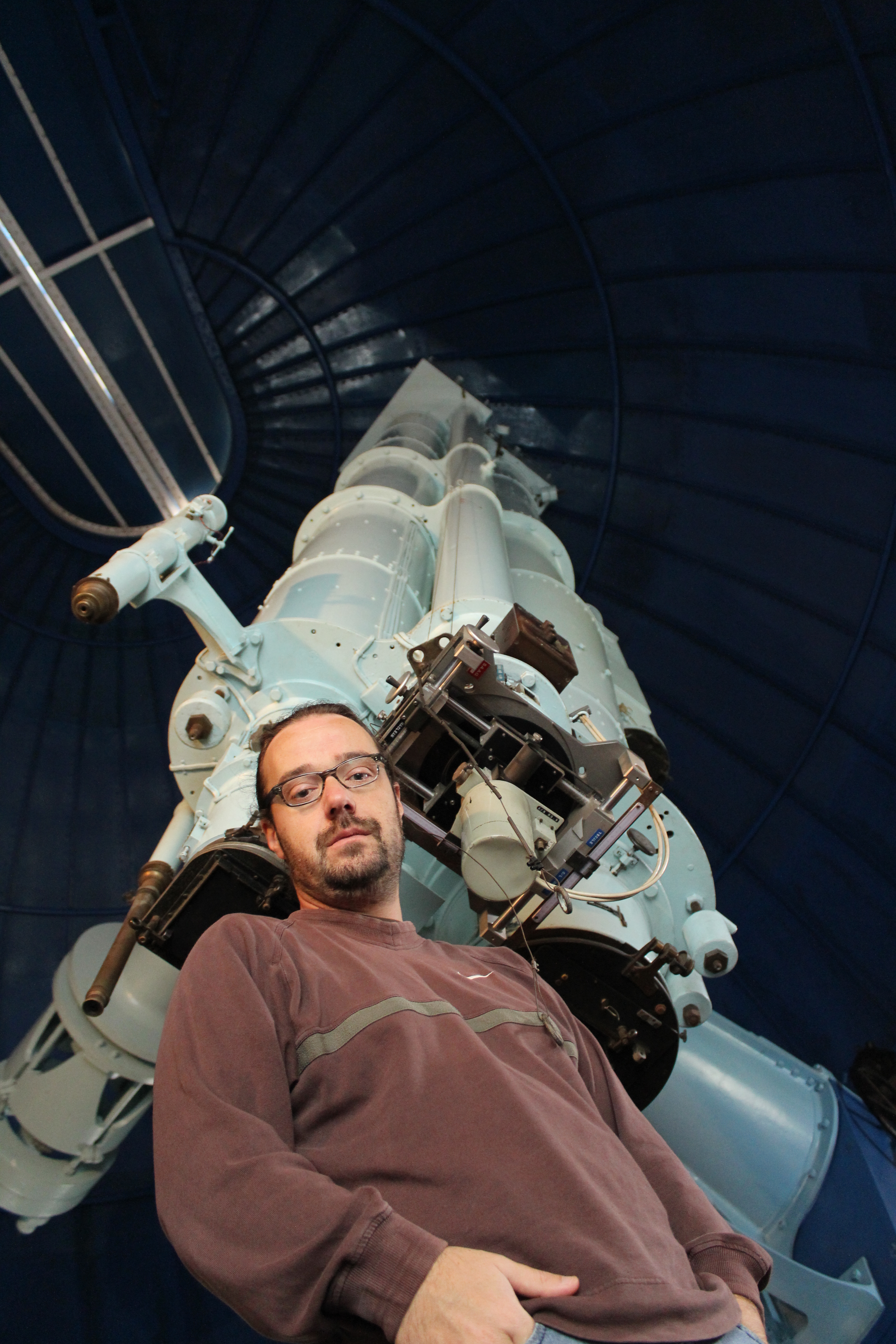 A researcher from the University of the Western Cape is part of an international team that has spotted two galaxies merging into one, a rare process that took place all of 11 billion years ago. Their discovery could shed light on how galaxies form, and rewrite a few textbooks at the same time.

Some 11 billion years ago, the universe but a toddler at age three billion years, out in the northwestern neck of space now known as the constellation Cetus, two galaxies slammed into each other. At a snail’s pace, by our counting, these two galaxies would become one over the next two hundred million years or so.

If anyone had been around to observe this rare cosmological occurrence, they would probably have called it spectacular. As far as cosmologists and astrophysicists can tell from their arsenal of mathematical models, two disk-shaped (round and sort of flat) galaxies would have, amid a swirl of matter and energy and gas, ploughed into each other, bits and pieces breaking off, the clingy gaseous debris from the collision latching and folding on to each other, ever so slowly binding the two galaxies together. (Think of it as two round eggs floating in space, crashing into each other and breaking up, but bound together by the gooey egg whites and yolks.)

Funny things would have started to happen as the galaxies merged. As the gas clouds from the two galaxies smashed into each other, they lost their angular momentum – the normally constant motion around a specific point – and start falling towards the centre of the new galaxy. That centre would grow thick with gas, and the increased density and heat, together with the friction between the disks, would spark a starburst, or accelerated star formation.

Such a merger-driven starburst would very likely see the new galaxy’s stars concentrated at the centre, different from our Milky Way, for instance, where stars are spread throughout the disk. And if scientists are right, there would also be a quasar, or active galactic nucleus, brimming somewhere near the centre of the galaxy, powered by a black hole.

The thing is, recently someone – something – did observe this. Or parts of it, at least.

The H in HXMM01, the name given to the new galaxy (full name 1HERMES S250 J022016.5−060143), stands for the Herschel Space Observatory. Built and operated by the European Space agency, Herschel was at its launch in 2009 the largest infrared telescope ever to be hurled into the skies.

It is this orbiting telescope – it circled as far as 1.5 million kilometres away – that helped scientists look back into time and catch a glimpse of the formation of HXMM01, picking up the light from the cosmological marriage. Herschel’s three detectors allowed the telescope to penetrate the cloud of stardust (essentially a mass of stars too distant for stars to be told apart) and gas that blocked the formation, and pick up the heat signals that were formed all of 11 billion years ago.

Those instruments, mostly imaging cameras and spectrometers, read the light and energy signals jumping off HXMM01, emitted between the far infrared and submillimetre wavebands, or the 55–672 micrometre range of the electromagnetic spectrum, where conventional optical telescopes cannot see.

These signals told the scientists quite a lot about HXMM01. Such as that the new galaxy is about ten times the size of our Milky Way, and is located at a redshift of 2.307. (The redshift of an astronomical source measures the reddening of its light emission, due to the expansion of the universe, on its way to the observer. It can thus be used to determine how long it took for light observed today to travel to us, and a redshift of 2.307 corresponds to a trip of 11 billion years.)

This data bonanza has provided scientists with a rare opportunity to compare their math notes with actual observations. Initially just one of thousands or so “promising” luminous red dots on a map compiled from a broad survey of the heavens, HXMM01 is beginning to intrigue the likes of Dr Mattia Vaccari, a postdoctoral researcher with the astrophysics group at the University of the Western Cape (UWC). While working in the UK and his home in Italy, Vaccari was one of the scientists who tweaked Herschel’s infrared cameras prior to its launch in 2009.

He is also one of the authors of the paper that revealed HXMM01’s formation to the world in a recent edition of the prestigious science journal Nature.

HXMM01 is appealing for a number of reasons. For one, very rarely do scientists get to witness the formation of a new galaxy out of two. As a result, it could upset the cart of mathematical models that scientists use to guesstimate the nuts and bolts of galaxy formation. (Study lead author, Dr Hai Fu of the University of Iowa in the US, enthusiastically likened the moment to the discovery of the archaeopteryx , the early bird said to be the transition between feathered dinosaurs and modern birds, as HXMM01 cast a light on a “critical transitional phase” of galaxy formation.)

Understandably, HXMM01 is giving scientists some pause for thought.

For one thing, all the data from Herschel would suggest that HXMM01 would eventually have grown into what’s known as an elliptical galaxy – so named because of its elongated shape – initially thought to be rare in the early universe. Also, the temperature of the galaxy’s dust (which is what Herschel really picked up) is considered high at 55 kelvin (or around -2180C). That temperature, combined with the vast gas stores (mostly hydrogen and helium), has meant that HXMM01 was extremely efficient at forming stars, most the size of our Sun. According to early data, it churned them at about the rate of 2,000 a year, about a thousand times faster than Milky Way could manage in a good year today.

“The fact that it is forming stars at such a high rate is challenging our conceptions,” says UWC’s Vaccari. “That fact that an object like HXMM01 led to an elliptical galaxy is also something that we can’t explain within our simulations, because most of the processes that we model for the formation of such a huge galaxy seem to take a longer than we can see in HXMM01.”

These are also questions perplexing Vaccari’s colleagues like Dr Romeel Davé, who holds the national research chair in multi-wavelength cosmology at UWC and spends his days constructing those computer-simulated models of the early universe that Vaccari speaks of. Take the fact that – an analogy with the first bloom of love would not be out of place, no – HXMM01 would very quickly consume all its available gas and turn into a “red and dead” elliptical galaxy. Why it slows down and doesn’t just soak up more gas from its surroundings – and so keep on grinding out more stars – has the likes of Davé scratching their heads.

“There must be some other process that keeps galaxies from accreting more gas,” he says. “This is not well understood, though many people think it has to do with the central black hole.”

Sadly, the Herschel telescope has run its course and spent all of the 2,300 litres of liquid helium that cooled down its onboard instruments, albeit a few months after its engineers had calculated it would. So any further observations of HXMM01 would, for now, have to be from land-based telescopes.

Luckily for Vaccari and Davé, they’re in the right place at the right time. Their posts at the University of the Western Cape are part of South Africa’s investment to support the development of the international Square Kilometre Array (SKA) project, 70% of which will be set up in South Africa’s Karoo. The leader of the group, UWC Astrophysics Group, Professor Roy Maartens, holds the SKA Research Chair in Astrophysics.

That allows Maartens and his team a role in not only what will eventually be the eat-your-heart-out SKA telescopes (whose construction should start in 2016 and be completed in 2024), but also the 64 dishes of South Africa’s MeerKAT radio telescope array. That means they will tap into the readings taken off MeerKAT, currently being built in the Northern Cape and scheduled for completion in 2016 and which will be incorporated into Phase 1 of the SKA project.

There will be no need to shed tears over the loss of Herschel as MeerKAT will sweep the radio portions of the same electromagnetic spectrum that was covered by Herschel. And it will do so across the same vast acreage of skies that Herschel did.

“MeerKAT will allow us to observe the same areas of the sky as we did with Herschel,” says Vaccari, “in order to provide another vantage point – at a different wavelength and thus in a different colour of the spectrum – onto the process of star formation.”

After all, there are a couple more red dots out there to explore.

This article originally appeared on Research SA and is a press release by the University of the Western Cape.

Physics needn’t be Greek to isiZulu