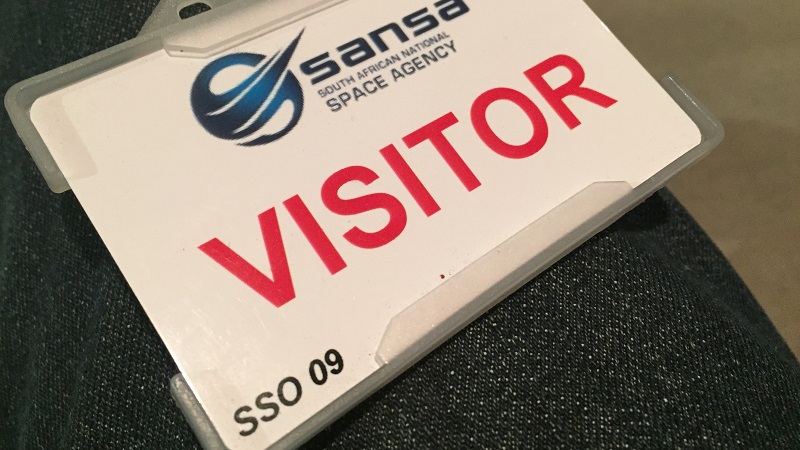 Despite the fact that the Hartebeeshoek installation for the South African National Space Agency (Sansa) is a designated National Key Point, it’s not an especially intimidating site. We might have been hoping, prior to visiting, for a Bond-villian-style underground lair, maybe nestling in some extinct volcano of the Magaliesburg mountains. What we found was a humble looking plot at the end of a little-traveled road in the foothills, about 60 km from Johannesburg and slightly to the right of Krugersdorp.

This is the HQ of Sansa’s Space Operations. And it’s much, much exciting than it looks at first glance.

I’m greeted in the lobby by the delightful and bubbly May Botha, communications practitioner for Sansa, arguably one of South Africa’s coolest agencies.

Other Sansa operations include the Earth Observation in Pretoria, and Space Science in the Western Cape. This particular arm of the Sansa umbrella is responsible for the tracking, house keeping and maintenance of a vast number of low-orbit satellites that pass over Africa. South Africa does have a few of her own satellites, but Space Operations is the babysitter to some big name international players as well.

But it’s not only in the satellite tracking business, the premises houses a number of very large antennas from other countries. This specific site was chosen back in the 1950s and the current office is actually still in the original building – with a number of add-ons, of course.

It could be seen as a secretive move to be far away from civilisation, but operations manager Yunus Bhayat explains that the site was originally chosen due to the fact that there is very little radio interference in the area.

Bhayat prepared a little presentation for us, which further breaks down the illusion that Sansa is shying away from public attention. The facility actually hosts a number of school tours and actively encourage groups to come see what they do.

“Getting the satellites into orbit, and then looking after it, maintaining it in its orbit between what is called life cycle house keeping on the satellite – that is typically what we do at Space Operations on a routine basis. We don’t do it for ourselves, but do it for international space agencies and satellite operators,” he explains.

Hartbeeshoek has around 15 full-motion antenna systems and its usage is predominantly government departments – like for forestry, Department of Housing, land affairs and security services. And the data gathered from some of the overhead satellites can be used for a number of things, such as agriculture assessments, vegetation mapping, reconnaissance, disaster management and weather forecasting.

The facility also provides live video feeds to clients, keeping them posted on the position and launch of their rockets and satellites.

“Our coverage included the second stage burn-2 and live video footage of the spacecraft separation. Sansa’s exclusive location and technical expertise put us in a position to monitor these key events, as they take place over the African airspace,” Bhayat said at the time.

In one of the corridors, Space Operations has a wall filled with all the missions that it has been a part of over the years – and its rather impressive to see.

But name tags aren’t the only little mementos that it keeps: on the opposite wall are figurines of model satellites, rockets, shuttles and the like. These have all been given to Sansa by the respective companies that the local space agency has worked with, whose satellites and shuttles it tracked.

As the space race began to heat up in the 1960s, NASA started to put up a lot more ground station across the world, and today’s location was one of them. In 1957, the agency at the time tracked Sputnik, the first artificial Earth satellite. It was purely a show of capability, to prove to the aeronautical powers that be that South Africa could track something in the night sky.

The latest project in which Space Operations has been involved in is the Galileo navigation satellite system.

Currently being created by the EU, the €5 billion project aims to be a stand-by or even an alternative option to global positioning satellites, running independently from GLONASS in Russia and the US GPS systems. The first two operational satellites were launched in 2011, and last year saw the launch of two more satellites from French Guiana. Once complete in 2020, the navigation constellation will consist of 24 operational and six active spare satellites.

The last two satellites were, however, injected into an incorrect orbit, as it was revealed that “the third stage of the Soyuz launch vehicle failed to circularize the satellites’ orbit correctly.”

It’s exactly these kinds of situations that Sansa needs to keep an eye on.

“The Galileo project, we did a number of operations for CNES (National Centre for Space Studies in France) supporting the constellation. The first was the IOVs (In-Orbit Validation) and the failed mission late last year where the two space craft were put into a much lower orbiting altitude than what was planned. It did recover somewhat, so the plan is now to utilise them in conjuction with the upcoming missions. I wrote to the team this morning saying that we are very appreciative of their effort and our support of the Galileo missions.”

What does Sansa use to track and maintain the satellites?

The systems that it uses include a 5.2 metre, 5.4m, 7.3m and a 10m direct reception antennas. The rest of the remaining systems on the premise are either hosted or belong to different international space agencies.

“In a future program, a plan is to host a mission control here in the remote sensing team reception. It is why we are here, it gives us relevance. The fact that we are here, we are serving the society, our nationals and our country,” he said.

Off the cuff Bhayat told us that even though very few South Africans know about Sansa’s work both locally and on the global front, the agency is pretty well-known to international organisations and that we (being South Africa) have a very good reputation with them. It’s part of Africa2Moon, a plan to sent a spacecraft built on the continent to our lunar satellite, and has a track record launching nano-satellites of its own.

If you want to find out more on all of Sansa’ operations, click here.

Read the original on htxt for a gallery of some really interesting things jotting around the premises (at least, those they’re allowed to show under the tight security rules).

The Science Inside Collins Chabane’s Crash