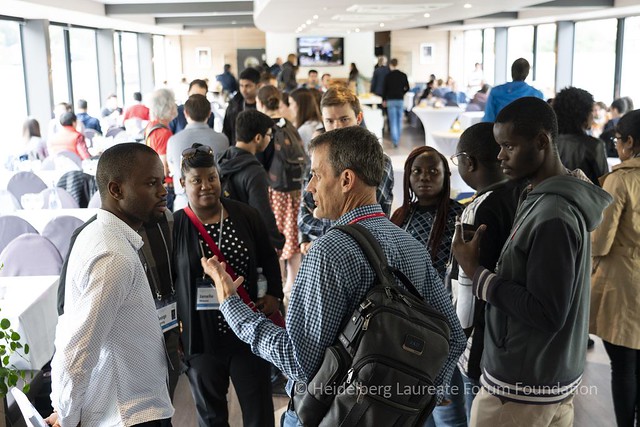 University of KwaZulu-Natal maths doctoral student Chinedu Izuchukwu is pretty clear about one of the highlights of attending the weeklong 7th Heidelberg Laureate Forum in Germany: it is meeting the man behind a software programme that has made his academic life so much easier.

The brain in question belongs American Prof Leslie Lamport, winner of the 2013 ACM A.M. Turing Award for his “fundamental contribution to the theory and practice of distributed and concurrent systems, notably the invention of concepts such as causality and logical clocks, safety and liveness, replicated state machines and sequential consistency.”

Award talk aside, what excites Izuchukwu is the fact that Lamport was the initial developer of LaTEX, and the author of this document preparation programme’s first manual. It is widely used in academic circles by mathematicians, computer scientists, engineers, economists and the like.

“I use LaTEX every day. And I actually had the opportunity to chat to Prof Lamport!” said Izuchukwu in the university town of Heidelberg. He explained how he among others uses the free software to perfectly typeset the mathematical formulations integral to his research.

The opportunity to rub shoulders with some of their academic heroes is one of the biggest perks available to the 200 participants from 60 countries selected to attend HLF.

The 24 laureates in Heidelberg this year represent some of the world’s most important awards in mathematics and computer science. They stand out thanks to the red lanyards they constantly wear around the neck. Twelve are presenting plenary lectures. For the attendees (wearing grey lanyards), there’s the opportunity for more than just a quick chat or selfie here and there with the who’s who in their field. They are commendably available during coffee breaks, workshops, lunch and during evening social functions – you name it. Not even old age (the oldest is the 89-year old Stephen Smale, winner of the 1966 Fields Medal) or injury (as is the case for artificial intelligence expert Prof Yoshua Bengio, co-winner of the 2018 ACM AM Turing Prize) stop them from engaging as often as possible with huddles of young researchers.

Among them are ACM AM Turing laureates Martin Hellman and Whitfield Diffie, the men behind cryptography and digital signatures. Vinton Cerf, a 2004 co-recipient of the AM Turing Award, is known among the participants as the Internet Guy. He co-designed and implemented the basic communication protocols behind the web. There’s also Ivan Sutherland, one of the pioneers of computer graphics and the man who as his PhD project in the 1960s developed Sketchpad, one of the ancestors of computer-aided design (CAD).

The youngest laureate around is the 37-year old Shwetak Patel, recipient of the 2018 ACM Prize in Computing. He already has three start-ups behind his name. One of these, SpiroSmart, has been tested in South Africa and Bangladesh, among others. Using the microphone function in one’s cellphone, it can help screen for lunch conditions.

Like the young researchers attending, the laureates represent a range of countries: from America, France and Canada to Iran, Switzerland, India, Greece, Hungary and Russia.

The HLF follows a similar format to the Lindau Nobel Forum. In fact, it’s the very copy of it, explained Prof Andreas Reuter, chair of the HLF Foundation’s scientific committee, at the opening ceremony on Sunday. As per tradition, a Nobel laureate also presents a lecture. This year it was Norwegian Edvard Moser, who jointly won the Nobel Prize in Physiology or Medicine in 2014. He among others talked about the type of brain cells that humans and animals use for orientation and navigation.

But back to Izuchukwu: he isn’t the only South African student among the 800 applicants worldwide whose application to attend the HLF was successful. Joining him has been compatriot and fellow Nigerian PhD student Lateef Joaoso. They have been members of the same UKZN research group since 2016, and both work on fixed point problems.

The University of the Witwatersrand is represented by a member of one of the CSIR’s robotics team, Cebisile Mthabela, and Oduetse Nthetse, who is writing a programme with which to extract information about evictions in South Africa from online news reports.

Salomon Kabongo Kabenamualu studies Natural Language Processing (NLP) at the African Institute for Mathematical Sciences and the University of the Western Cape in Cape Town. He’s something of a “computer linguist”. This Congolese student is using machine learning to develop computer-based translation systems for languages spoken in his motherland, but which are not covered by applications such as Google Translate.