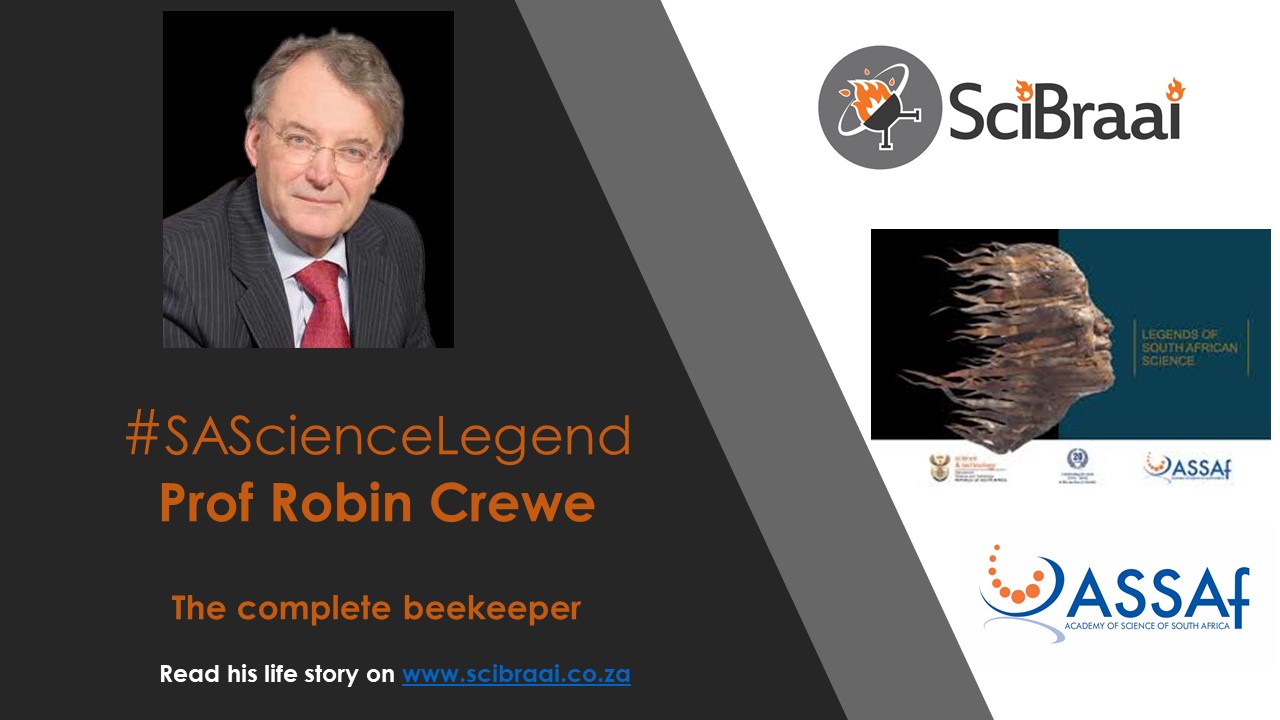 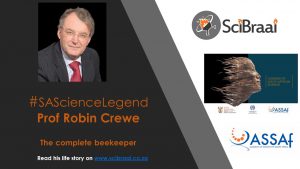 Robin Michael Crewe was born in Johannesburg on 18 February 1946. Growing up on a farm in Mpumalanga, his secondary and tertiary education was undertaken in Natal. He matriculated from Kearsney College in 1963 going on to enrol at the University of Natal, Pietermaritzburg where he completed his undergraduate and Masters studies.

The defining moment in my career was when I decided to undertake my PhD studies on ant chemical communication. This led to a lifelong exploration of social organisation in ants and honeybees.

While furthering his entomological studies at the University of Georgia, he worked as a research and teaching assistant. He developed his interest in chemical communication and social organisation in social insects, particularly honey bees and ants, while living in the United States. The work reported in his PhD was well received, and in 1971 he was awarded his doctorate with distinction. Returning to South Africa later that year, Crewe was appointed as lecturer in the Entomology Department of his alma mater, the University of Natal. He remained there until the University of the Witwatersrand (Wits) offered him the post of senior lecturer in the Department of Zoology. Consequently, he moved to Johannesburg in 1976.

His time at Wits was fruitful, and he soon distinguished himself in a number of roles. Crewe was promoted ad hominem to Professor of Zoology in 1984 and, the next year, became the Head of the Department for the first time (he would reprise this role in 1991). He was appointed as Deputy Dean of the Faculty of Science in 1986. A period followed where he served as Chairperson of the School of Biology, and in 1994 he was elected to the position of Dean of the Faculty of Science. He also served on the Council of the university, having been elected by Senate to do so.

While working at Wits, he founded the Communication Biology Research Group, of which he was the Director for the decade spanning from 1986 to 1996. Studying the chemical communication systems of honey bees, a major focus of the research undertaken by this unit was the investigation of pheromonal communication of honey bees.

When his term as Dean ended, Crewe bid Wits adieu, and moved to the University of Pretoria (UP) in 1997 to take up the position of Dean of the Faculty of Biological and Agricultural Sciences. He served in this capacity for six years, at which point he was promoted to the position of Vice-Principal of Research and Postgraduate Studies. His responsibilities in this position were manifold, with the Faculty of Engineering, the Built Environment and Information Technology (EBIT), the Faculty of Natural and Agricultural Sciences, as well as the Gordon Institute of Business Science falling within his ambit. Added to this scope was the oversight of all postgraduate studies and re- search activities undertaken at the university, as well as the international office, library services and the research support office.

An additional role he fulfilled was in the Southern Education and Research Alliance (SERA), where Crewe represented UP. In his function as Relationship Manager, he was responsible for the everyday operations, and was also expected to report back to the Council of UP on progress which was made by the alliance. Within this alliance, he was a member of the feasibility group as well as the strategic management team. Furthermore, he functioned as a joint co-ordinator of numerous working groups, including the Forestry and Forest Products Biotechnology, Food and Food Technology, Molecular Modelling, Sustainable Rural Development and Water Research groups.

Outside his university responsibilities, he has been a member on a variety of panels and committees in the realm of academic advancement together with some of the key role players in South African education policy, including the National Research Foundation (NRF), the Department of Education (DoE) and later the Department of Higher Education and Training (DHET), Higher Education South Africa (HESA). He has also served as Chairperson of the South African Agricultural and Veterinary Science Deans Committee, and on the Agricultural Research Council’s ANPI-UP Management Committee and the Plant Protection Research Institute – UP Nitrogen Fixation Unit Committee.

While excelling in his role as university administrator, he continued to participate in research activities. He was made Extraordinary Professor in the Department of Zoology and Entomology of UP. Here he undertook research as a member of the Social Insect Research Group (SIRG), which extended the research programmes originally undertaken at Wits in the Communication Biology Research Group. After a ten-year period in the role of Vice-Principal, Crewe retired from this position. He remains at UP, where he is the Director of the Centre for the Advancement of Scholarship, as well as continuing in his capacity as an active researcher.

His distinguished research career as an entomologist has been devoted to the study of social insects, particularly ants and honey bees. His particular field of expertise in behavioural ecology relates to social organisation and chemical communication prevalent in social insect colonies. Another branch of the research undertaken is the assessment of indigenous populations of honey bees to ascertain the impact of honey bee diseases.

What people might not know is that he has a passion for flying fixed-wing aircraft.

His work on honey bees is particularly significant in the wake of the widespread debate on the crisis faced by bee populations worldwide. Honey bees play a critical role, not only as producers of honey, but also as pollinators of crops. It has been widely reported that numerous honey bee populations across the planet are declining rapidly, facing potential extinction in certain regions of the world. In a special issue of the journal Apidologie, some of the potential developments were listed as colony collapse disorder, winter losses and weak bee colonies. Such a “doomsday scenario”, as Crewe has termed it, could have far-reaching ecological impacts and affect the livelihoods of beekeepers, as well as impact on agricultural production, which in turn could threaten food security. Crewe’s work has led to an understanding of a variety of aspects related to the ecology of these insect colonies which may be utilised to combat such eventualities. He has studied in detail the self-organising social systems which are characteristic of social insects, detailing the underlying mechanisms through which this organisation is achieved. A related aspect of this focuses on pheromones as a means of communication, and the associated regulation of reproduction in honey bees.

Another area in which Crewe has conducted extensive research, is the phenomenon of social parasitism in honeybee populations. Within this field, Crewe has studied the interactions between hosts and parasites, as well as the co-evolution of these, and also the relationship between the phenomenon of parasitic worker bees and the practice of beekeeping. In addition to these areas, he has investigated environmental factors relating to the conservation of honey bees.

Crewe has found that the largest number of wild honeybee swarms are to be found on the African continent, meaning that most genetic diversity is also to be found here. A thorough study of these African populations could provide a strong basis for conservation efforts in the Northern hemisphere and Latin America, regions where honeybee populations are particularly endangered. Furthermore, African honeybees are genetically more resistant to diseases than their counterparts in other regions of the world. There is potential for slowing the decline in honeybee populations on other continents, if some of these more resistant genes could be introduced.

His status as one of the world’s foremost honeybee experts has been recognised worldwide, and as a result he has been invited to a variety of institutions as a visiting scholar. While in the Netherlands on sabbatical leave in 1979, he was temporarily appointed at the Rijksuniversiteit Utrecht in the Laboratory of Comparative Physiology. In 1988, he had the opportunity to spend a period of three months as Professeur Invite at the Université Paris-Sud at Orsay, France. He has maintained strong working relationships with colleagues in France, with numerous collaborative efforts over the years. He also spent some time in Bremen, Germany where he was a German Academic Exchange Service (DAAD) research fellow at the University of Bremen in 1997. His research association with the Molecular Ecology Research Group led by Prof Robin Moritz has been of long duration and has resulted in numerous collaborative visits and the exchange of post graduate students. His most recent research collaborations have also included academics from France, Germany and Switzerland.

As supervisor or co-supervisor, Crewe has seen 15 MSc students to graduation, and 15 PhD students, with more in the pipeline. In addition, he has had five foreign PhD students complete a portion of their studies in his laboratory, and has had ten postdoctoral fellows work in his laboratory. He has published widely, with in excess of 130 articles appearing in peer-reviewed journals and has served as editor of the Journal of the Entomological Society of Southern Africa. He has been a member of the editorial boards the Journal of the Entomological Society of southern Africa, African Entomology, Insectes Sociaux and the South African Journal of Science. Currently, Crewe is a member of the International Scientific Board of Apidologie.

In recognition of his contributions to his field, Crewe has been awarded a number of honours and he holds a B-rating from the NRF.

Glenda Gray: guided by the needs