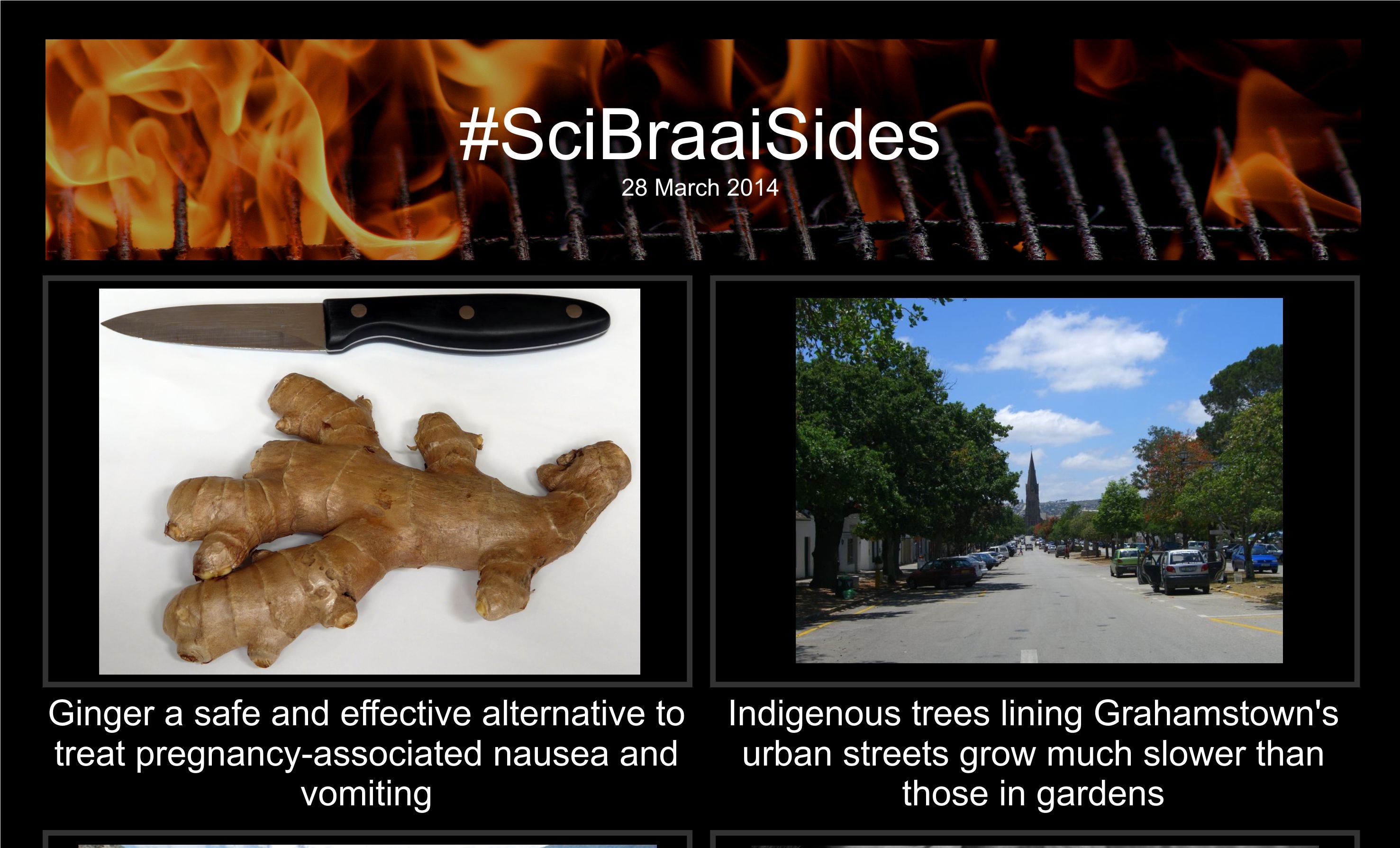 Dish up some sides with your Friday afternoon SciBraai: From Grahamstown’s trees and a study on what ex-combatants think, to drinking ginger when pregnant and chatting to kids about sexual matters. Ginger gets the green light to fight queasiness

Here’s a note to pregnant women: Ginger not only works to relieve symptoms of nausea, but is also a safe option to use.

This is the conclusion of a systematic review and meta-analysis of all current research on the effect and safety of drinking ginger to treat pregnancy-associated nausea and vomiting. The lead author of the study, published in the Nutrition Journal, was Estelle Viljoen, who is affiliated to Stellenbosch University and the University of Limpopo.

The review included only 12 random control trails involving 1278 pregnant women were included. Ginger significantly improved the symptoms of nausea when compared to placebo, but not necessarily the vomiting episodes. No significant risks for spontaneous abortion were found, nor were side-effects such as heartburn and drowsiness common.

“Because of the possible harmful side-effects of conventional medicine to the foetus there is a need for alternative options to relieve nausea and vomiting during pregnancy,” writes Viljoen in explaining the need for the review. “Based on evidence from this systematic review, ginger could be considered a harmless and possibly effective alternative option.”

Reference: Viljoen, E. et al (2014). A systematic review and meta-analysis of the effect and safety of ginger in the treatment of pregnancy-associated nausea and vomiting, Nutrition Journal

Do Grahamstown’s trees grow at the same speed?

Indigenous trees that grow along Grahamstown’s streets grow up to 30% slower than those found in gardens in this Eastern Cape town.

This difference is “significant”, says P de Lacy and CM Shackleton of Rhodes University, in short notes published in the latest South African Journal of Botany.

The two environmental scientists used two methods to compare the growth rates of indigenous street and garden trees: tree ring counts on increment cores and mean rates from trees of which the planting age is known. Tree ring counts were a viable method for about one in every three species examined.

About why the study was undertaken, De Lacy says: “Urban forestry is advocated worldwide as a means of enhancing the liveability of towns and cities, and mitigating some of the anticipated impacts of climate change. Optimisation of the benefits of trees in urban areas is dependent upon knowledge of tree form, growth, and the products and benefits that trees provide.” De Lacy adds that despite growth rates being an important variable to study, little is known about the growth rate of trees in urban areas, and even more so for indigenous species growing in towns in the developing world.

In the minds of ex-combatants

There seems to be truth in the saying: “Once a military man, always a military man”, if research from the University of the Western Cape about how ex-combatants in South Africa remain militarised is taken into account.

Godfrey Maringira of the University of the Western Cape took findings from 16 detailed interviews of eleven 11 APLA ex-combatants and five Zimbabwean army deserters into account in a study that has been published in the journal Sociology.

“Identities which were forged through resistance continue to be reproduced in different ways in post-conflict society,” writes Maringira. “Military identity is a source of status and recognition in the everyday lives of ex-combatants, either as ‘defenders of the community’ or for individual gain.”

Maringira says he realises that some people may argue that there is no such thing as military identity. However, from the interviews he did with the group of ex-combatants interviewed he has come to realise that the people remain attached to such an identity, and saw themselves as having a particular role in their communities.

Studies, particularly in Africa, often present ex-combatants as if they can be easily transformed into civilian life. However, Maringira says that this is easier said than done. “It is a complex matter to demilitarise ex-combatants’ minds in a highly unequal and militarised community,” he adds.

Not many parents chat to children about HIV and HPV

Only two in every five mothers who feel they know enough about HIV prevention and general sexual health to adequately discuss these live-changing issues with their children actually do so.

This is the findings of a brief survey of 86 women who attended an antenatal clinic in Johannesburg. The study was conducted by two American researchers, Kendall Leser of Ohio State University and Shelly Francis of Walden University. It was published in the African Journal of Reproductive Health

“Parent-child communication about sexual health is generally an effective strategy by which to encourage safe sexual practices among youth,” says Leser. She advised that future research and programme planning efforts should identify the best strategies to educate South African mothers on HPV and cervical cancer, so that they can effectively communicate their knowledge about these topics to their children.