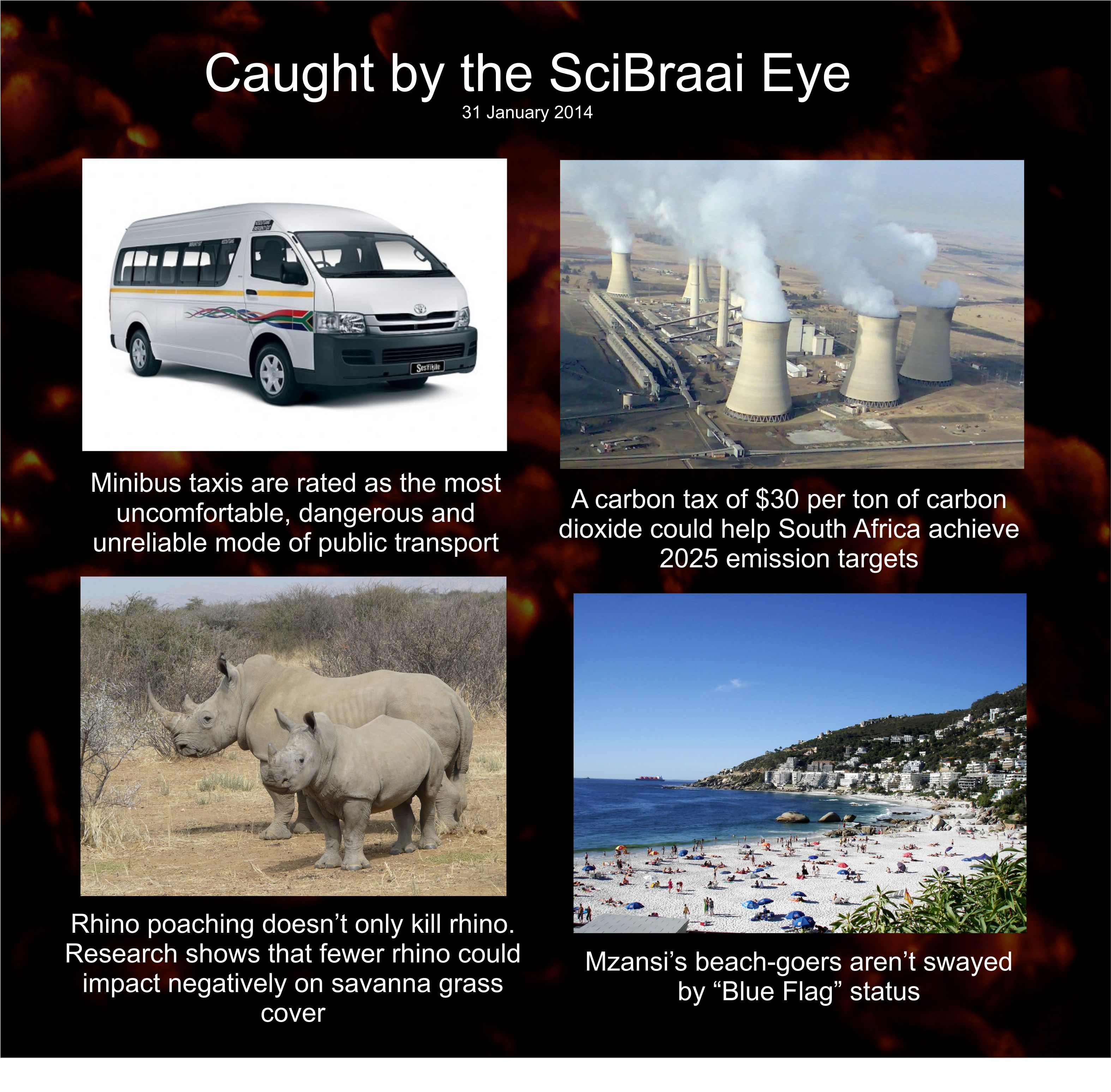 Does it really matter if all the rhinos die? What does Blue Flag beach status really mean? What can South Africa do to curb CO2 emissions? Most South Africans use minibus taxis, but how do we really feel about them? Should you pack malaria meds for a visit to the Kruger Park? Answers in this week’s SciBraai Eye. Minibus taxis are the least comfortable, the least safe and least reliable form of public transport, yet that’s what commuters use most often to get from Point A to Point B. That’s the finding of an exploratory study by Ayanda Vilakazi and Krishna Govender of the University of KwaZulu-Natal about commuters’ perceptions of public transport service in South Africa. The study, published in the Journal of Social Sciences, was conducted in Johannesburg among a convenience sample of 902 commuters. Issues such as reliability, efficiency, comfort, safety and accessibility of various forms of public transport were tested.

The findings have implications for service providers, transport planners and relevant government authorities who have to take cognizance of the perceptions of the commuters and implement strategies to improve the situation.

Should I take malaria pills religiously when visiting the Kruger National Park? Or can I risk leaving them at home when visiting in specific seasons? Will there be malaria-carrying mosquitoes around, or not? These are some of the questions people consider before visiting South Africa’s well-known national park.

Malaria is caused by parasites of the genus Plasmodium, and are transmitted to humans via members of the mosquito genus Anopheles. In a study in the open source Malaria Journal, Givemore Munhenga of the National Institute for Communicable Diseases and colleagues conducted regular entomological surveys at five sites to determine the relative abundance of anopheline mosquitoes in the northern Kruger National Park.

The researchers collected specimens belonging to nine different taxa, with members of the Anopheles gambiae species complex being the most abundant and most widely distributed. Overall population densities fluctuated with seasons. Of the five sites sampled, Malahlapanga and Sirheni Dam had the highest anopheline mosquito species diversity due to the perennial availability of suitable breeding sites.

Blue Flag beaches? So what?

Do South Africans know what it means if a beach has Blue Flag status? And does it really matter to them when they decide on where to go and swim? Not really, if the findings from a study conducted by tourism experts from the Northwest University is anything to go by.

Beach awards such as the European Blue Flag are increasingly adopted in many countries as an environmental brand to promote better beach management and encourage tourism.

The study by Serena Lucrezi and Peet van der Merwe in the Journal of Coastal Research was conducted at six popular South African beaches, three with and three without Blue Flag status. It investigated awareness and evaluation of the Blue Flag award among 579 beach-goers. Results from a structured questionnaire showed that over half of the participants, mostly people on the Blue Flag beaches, knew about the Blue Flag award and its criteria; however, approximately one-third of the participants were unaware of it.

Thinking about a carbon tax for SA

The idea of carbon taxes are often bandied about in an effort to reduce South Africa’s high levels of greenhouse emissions. The options for the country is discussed in an article available online from the open access journal Applied Energy, authored by Theresa Altona and colleagues from South Africa’s National Treasury, along with Danish and Finish researchers.

Their results indicate that a phased-in carbon tax of US$30 per ton of CO2 can achieve national emissions reductions targets set for 2025. Relative to a baseline with free disposal of CO2, constant world prices and no change in trading partner behaviour, the preferred tax scenario could reduce national welfare and employment by about 1.2 and 0.6 percent, respectively. However, if trading partners unilaterally impose a carbon consumption tax on South African exports, then welfare/employment losses exceed those from a domestic carbon tax. It is suggested that South Africa can lessen welfare/employment losses by introducing its own border carbon adjustments.

Megaherbivores have been lost from most ecosystems worldwide and current increases in poaching of rhino and elephant species threaten their status in the systems where they still occur. Although megaherbivores are said to be key drivers of ecosystem structure and functioning, empirical evidence is strongly biased to studies on African elephant. We urgently need a better understanding of the impact of other megaherbivore species to predict the consequences of megaherbivore loss.
To this end, Joris Cromsigt, who is associated with the Swedish University of Agricultural Sciences and the Nelson Mandela Metropolitan University, led a study focusing on white rhinos. The researchers used a unique ‘recolonization experiment’ to show how the reintroduction of this megaherbivore 30 years ago have started to change the structure and composition of the Kruger National Park’s savanna grasslands.

“It remains to be tested if these changes lead to other ecological cascading effects. However, our results highlight that the current rhino poaching crisis may not only affect the species but threaten the potentially key role of this megaherbivore as a driver of savanna functioning,” writes Cromsigt.