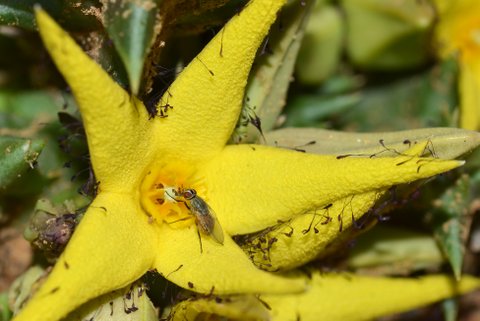 In the life cycle of smelly yellow carrion plants (Orbea lutea subsp. lutea), all flies are not created equal. Their flowers, which quite literally reek, lure insects from far and wide that are attracted by the smell of decaying matter and faeces. However, only one of these types of visiting flies actually pollinates it – because its head is small enough to do so!

This finding was made in a study led by Dr Adam Shuttleworth of the University of KwaZulu-Natal’s pollination ecology and evolutionary biology research group, and is published in an article in the international science journal Flora.

His co-authors are colleague Prof Steve Johnson, who leads the UKZN research group, and Prof Andreas Jürgens of the Technische Universität Darmstadt in Germany. The discovery was made as part of an ongoing research project on the ecology and evolution of stapeliads, a group of plants that contains some of the most bizarre and unusual flowers seen in plants (including carrion plants). Not much is however known about why they evolved such weird floral forms, and how they are pollinated.

The yellow carrion flower is probably one of the most widespread types of stapeliads, and is found in the provinces of Limpopo, North-West, Gauteng, Mpumalanga, Free State, KwaZulu-Natal and Northern Cape, as well as in Botswana, Mozambique, Zimbabwe up to tropical Africa.

According to Dr Shuttleworth, their flowers emit an odour which is reminiscent of carrion. Chemical analysis during this study showed that it contains compounds such as trimethylamine, dimethyl disulfide, dimethyl trisulfide, phenol, p-cresol. These are compounds also contained in the odours of both carrion and faeces.

The research team knew that a range of flies that thrive on decaying matter often visit the yellow carrion flower, and speculated that the plant would in the process be pollinated by many different such species. To study it, they set out to the village of Muden in rural KwaZulu-Natal, and inspected the goings-on around thirty plants.

They were quite surprised to find that although many types of flies do visit the flowers, only one species actually helps to pollinate it – a species of Atherigona fly in the family Muscidae.

“The other flies would approach and sometimes walk onto the flowers, but seldom exhibited behaviour that would allow them to pollinate flowers,” Dr Shuttleworth remembers his observations. “This was difficult to understand until we realized that the size and shape of the corona lobes at the centre of each flower were such that they formed a narrow aperture which prevented the larger flies from accessing the droplets of nectar inside these flowers.”

Although attracted to the flowers, many of the flies could thus not actually get near the food reward, a necessary requirement for the fly to pick up or deposit pollen and effect pollination.

It was not for a lack of trying on their part. Because their heads were too broad, they were unable to enter far enough to obtain the reward and pollinate the flowers. The smaller Atherigona flies, however, have narrower heads and are able to properly enter this cavity. “Some of these non-pollinating flies did try to access the reward but could not reach deep enough into the flower to reach the nectar or make contact with its reproductive parts,” says Shuttleworth.

Morphometric measurements confirmed that Atherigona flies were the only visitors whose heads could fit between the inner corona lobes of the flower in order to access the cavity below the guide rails, required to remove and insert pollen.

Shuttleworth says that many South African plants have such a special relationship with just one of two pollinators, but researchers are still unsure why such specialisation develops. In the case of yellow carrion flowers he speculates that this relationship may have evolved because it enhanced more effective pollination of the plant.

The research team also established that even though the yellow carrion flower is brightly coloured, flies do not perceive this colouration as particularly unusual and this doesn’t do much to attract them  to visit. It’s the strong smell of carrion that makes it so irresistible to flies.