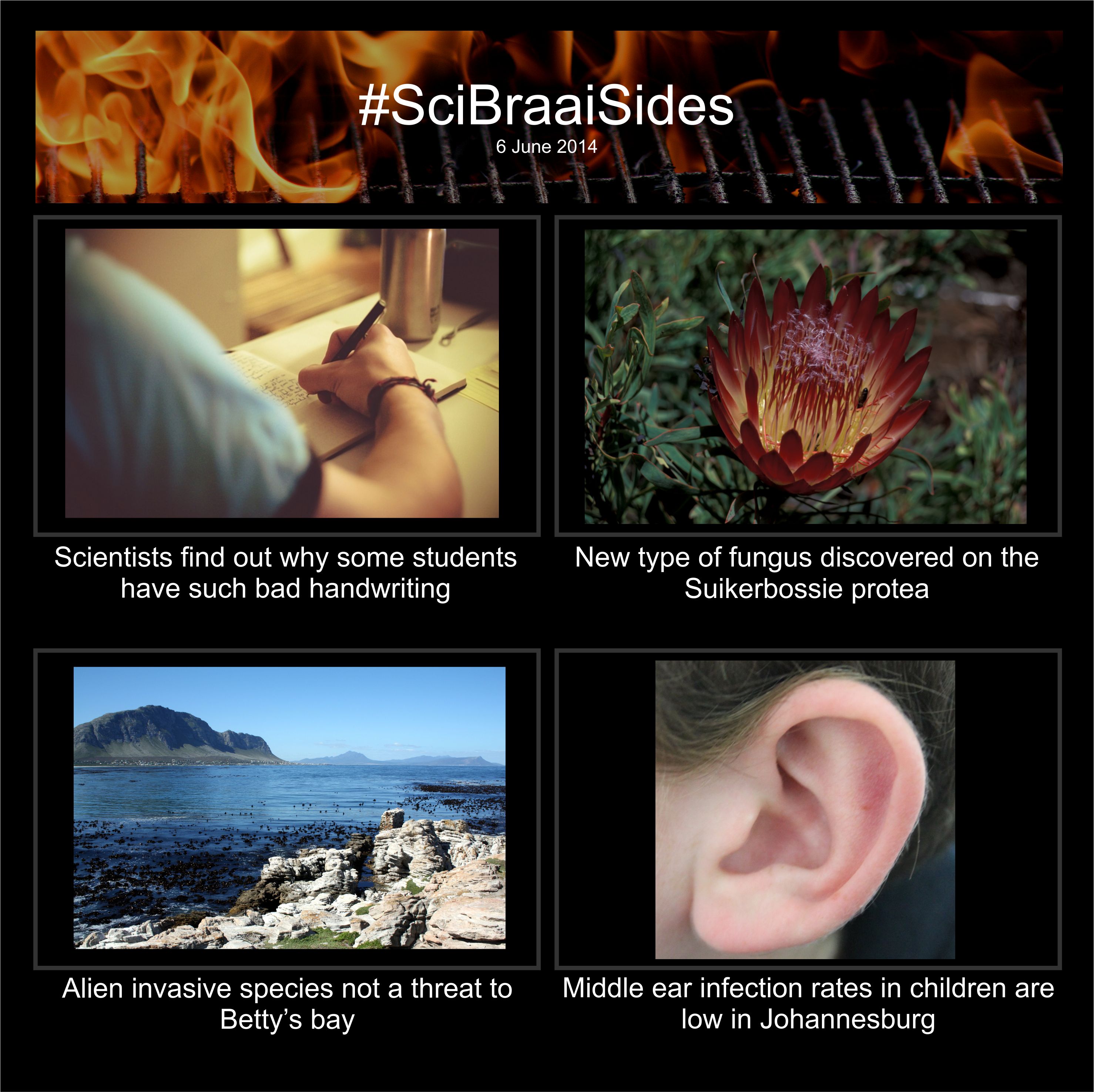 “Suikerbos, ek wil jou hê” (I want you, Sugarbush) is how a popular Afrikaans folksong goes. Read this week’s Scibraai Sides to find out just what has been discovered on the “suikerbos” protea. And also find out more about ear wax, the Betty’s Bay Marine Protected Area, and what lies behind the handwriting problems of some students. Coast still quite clear of invasives around Betty’s Bay

Some relatively good news coming out of the Kogelberg Biosphere Reserve (KBR) in the heart of the Cape Floral Kingdom, and the adjacent Betty’s Bay Marine Protected Area: a recent survey of its intertidal rocky shores shows that this important marine conservation area is still basically free from invasive species.

Results of the study by Hanlie Malherbe and Michael Samways of Stellenbosch University are published in the journal Koedoe: African Protected Area Conservation and Science.

The mytilid Mediterranean mussel, Mytilus galloprovincialis, and the bryozoan Watersipora subtorquata were the only alien species recorded along the coastline, which included the MPA. The abundance of mussel was significantly higher outside the MPA, and in turn more W. subtorquata were found inside the MPA.

“It is important that the Betty’s Bay MPA and its adjacent coastline maintain its current status as an area with relatively few marine alien species,” says Malherbe. “The conservation implications on management require routine surveys of this region to detect early introductions of any additional species.”

Celebrations! A new Penicillium species have been found during a survey of the tinier life forms found in the fynbos biome.  Its name is Penicillium sucrivorum and it was found on the well-known Protea repens (also called the “suikerbossie”).

The findings were noted in an article published in Mycologia. The lead researcher is South African Cobus Visagie of the Centraalbureau voor Schimmelcultures (CBS) Fungal Biodiversity Centre – an institute of the Royal Netherlands Academy of Arts and Sciences. Among the co-authors on the paper is Prof. Karin Jacobs of Stellenbosch University, who was Visagie’s study leader while he was studying the intricacies of the fungi found in the fynbos region.

The discovery was made during a survey during which 61 Penicillium species were isolated. Based on its DNA, the new species belongs to the same clade as P. aurantiacobrunneum, P. cairn sense, P. miczynksii, P. neomiczynskii and P. quebecense.

Waxing on about middle ear infection

In a recent study researchers from the University of Pretoria wanted to find out how prevalent middle ear infection is among children who visit primary healthcare clinics seeking medical attention. In all 140 Johannesburg children between two and sixteen years were examined.

During the study, the otologist (someone who studies the physical properties of the ear) had to remove earwax from more than one in every three children’s ears. Luckily, only 6,6% of the children had chronic suppurative middle ear infection, which means that there was some form of pus or discharge present. This was the most commonly found type of middle ear infection found in the participants who were between six and fifteen years old. Acute middle ear infection was only diagnoses in the younger children below five years of age.

“Chronic suppurative otitis media prevalence, as classified by the World Health Organization, was high,” says lead author Leigh Biagio of the University of Pretoria in an article in the South African Medical Journal. “Consequently diagnosis, treatment and subsequent referral protocols may need to be reviewed to prevent complications.”

Do you regularly have to mark the exam papers of university students and struggle to make sense of their handwriting? Then take note.

The students were also screened for factors related to dysfunction in their handwriting. They were given a short screening copying task, which was subsequently analysed for its quality and errors. A Handwriting Assessment Checklist was also used to assess various factors related to handwriting such as posture and pen grasp.

“Students appear to have little understanding of their handwriting problems as those reporting that handwriting affected their ability to finish examinations were not those identified as having dysfunctional handwriting,” Franzsen notes in the South African Journal of Occupational Therapy.

They found that a student’s ability to write quickly was significantly hampered by poor positioning of the paper, how they held their pen and problems with copying text. Handwriting was significantly less legible when a student held the pen too close to the tip, pressed down on the pen when writing or missed words and made spelling mistakes.

“These factors should therefore be considered with a speed and legibility score when assessing whether a student presents with a ‘real’ handwriting problem so further appropriate assessment can determine accommodations the student needs to allow them to complete their examinations,” advises Franzsen.