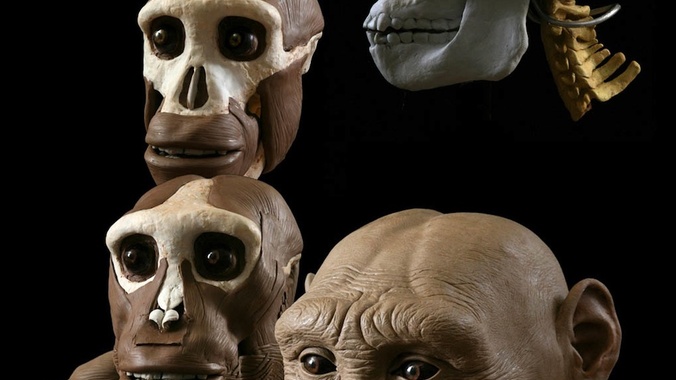 A “man” stands naked in the centre of the studio. In the dim light cast from a lamp on a nearby table, you can see the threads of muscles running down his arms and cording up his legs.

But something is wrong: his chest does not expand with air, he does not shift his balance, and when a white-haired man with a scalpel moves toward him, he doesn’t flinch.

John Gurche, palaeoartist and creator of lifelike hominid reconstructions, says that sometimes when he is on his own at night, looking down at his notes detailing the science of what these long-dead creatures looked like, “you look up to find your creation looking at you. Rationally, you know that it is a thing of clay and plaster, but it feels like a living presence.

“It is like writing fiction: if you wish to fool others, you first have to fool yourself.”

Gurche, whose reconstructions grace the Smithsonian Institution’s new Hall of Human Origins in Washington, DC, and who worked as a consultant on the set of Steven Spielberg’s Jurassic Park, will deliver the 10th Standard Bank/PAST Phillip Tobias memorial lecture, titled The Ancestral Connection: Portraits of our Prehistoric Human Family, at the University of the Witwatersrand in Johannesburg on October 16.

This is not Gurche’s first trip to the country. His CV is littered with collaborations with Wits University, and he says, jokingly, that it is South Africa’s fault that he keeps coming back.

“Wits is home to one of the world’s best collections of fossil hominids (human ancestors and evolutionary cousins), so I’ve been coming here since the 1980s to study them and reconstruct their faces and bodies.

“If Lee [Berger, professor in the Institute of Human Evolution at Wits] will stop finding these fantastic fossils, I can stop coming here.”

Berger, who discovered the possible human ancestor Australopithicus sediba in 2008, last year headed up theNational Geographic Rising Star expedition, following the discovery in the Cradle of Humankind of what he calls “the richest early hominid site in South Africa, including Sterkfontein”.

The world-renowned palaeoscientist, who is also an explorer-in-residence at National Geographic, has not given any indication of the number of fossils that have been found at the Cradle site or what species or ages they are – and neither will Gurche, who is also working on the project.

There is more to being a palaeoartist than translating science into the tangible and visual, says Gurche, who sees himself as a storyteller.

With a background in geology, focusing on palaeontology, and a masters degree in anthropology, the science was not enough for Gurche. “I had a great deal of wonder for the field, and this was not expressed by taking the straight academic path … I build ancient faces because I want to see them. It’s the next best thing to a time machine …

Read on at the Mail and Guardian.