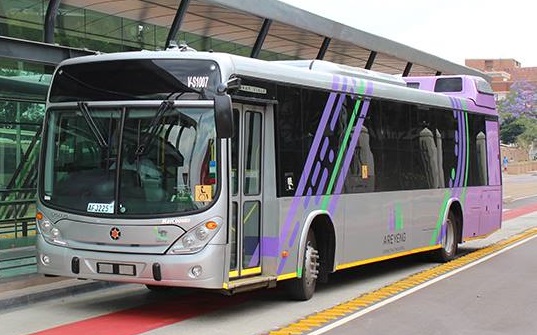 by LUNGELO SHEZI via htxt.africa

It’s been just under six months since the Project Isizwe free WiFi service was first made available on the Tshwane Bus Rapid Transit system and so far, 163 126 unique users have logged onto the network while waiting for or on a bus.

More stats reveal that a total of 6 461 327 sessions have been logged since the transport project started and 21 242.3GB has been uploaded and downloaded over the network. Users have a 250MB a day cap, which helps put that total usage into perspective – remember this is only data used on the transport network and not on the city wide hotspots.

Like all the other WiFi sites located around the metro, commuters on the bus system, also known as “A re Yeng”, can use up to 250MB per day on their mobiles in all its main routes

On top of using Project Isizwe to access social networks, look for jobs and watch the network’s free VOD service, passengers can also get real-time access to bus schedules, maps and gate and ticket information, as they pass through the bus terminal.

This is certainly a few leaps ahead of the Jo’burg-based Rea Vaya Bus Rapid Transit system which so far only had free WiFi available in nine bus turnk stations.

“Each day, thousands of people pass through transportation hubs such as airports, train and bus stations, and with business and leisure travellers carrying smartphones, tablets and other mobile devices, the demand for high capacity high performance Wi-Fi connectivity has not just become a ‘nice to have’ amenity, but rather an expected service, like electricity and running water,” said Michael Fletcher, sales director for Ruckus Wireless sub-Saharan Africa.

“The City of Tshwane’s Bus Rapid Transit system, A Re Yeng, is a perfect example of this,” he added.