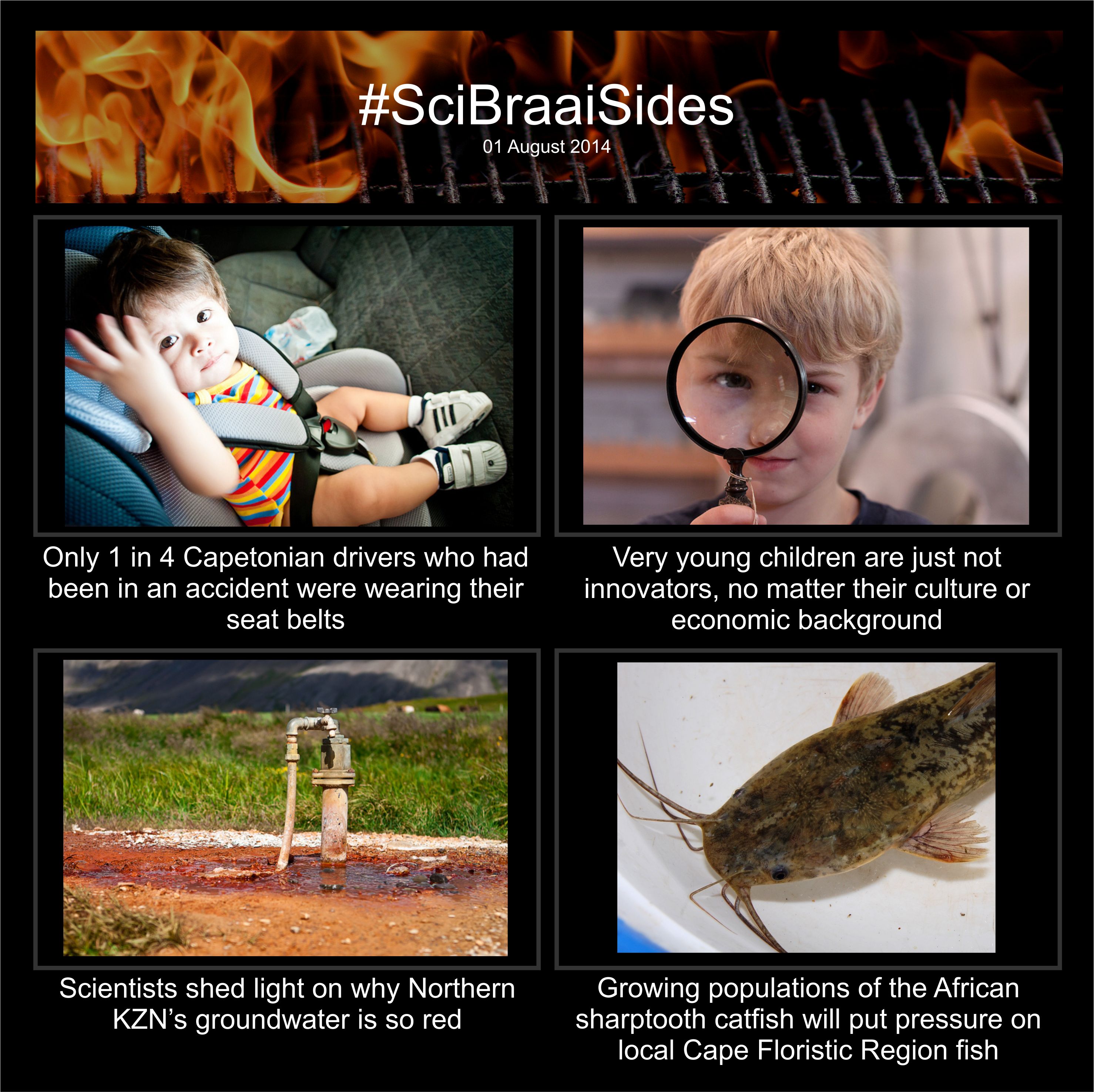 From Cape Town’s seatbelt wearing habits, the cloudy red groundwater of Zululand to catfish and the ability of San children to come up with new ideas for tools – these are some of the recent studies conducted by South African researchers that are part of this week’s Scibraai Sides. Seems that only about 1 in every 4 Capetonians wears a seatbelt – or at least the ones that are in road accidents, that is.

The study was led by Daniël van Hoving of Stellenbosch University, and is published in the South African Medical Journal.

Van Hoving and his colleagues collected three months’ worth of data from traffic accidents attended to by EMS Metro Rescue. They wanted how seatbelt use – or not – influenced the severity of injuries of vehicle occupants involved in accidents in Cape Town.

In total 107 patients were included in the prehospital phase. Seatbelts were only used in 25,2% of cases. People who did not wear seatbelts were five times more likely to have a high triage score – a measure which is used by emergency staff to determine treatment priorities of which patients to attend to first based on the severity of cases. Although seatbelt non-users were more likely to be admitted to hospital, they did not sustain more serious injuries.

“The prevalence of seatbelt use in vehicle occupants involved in road traffic collisions was very low,” says van Hoving. “The association between seatbelt non-use and injury severity calls for stricter enforcement of current seatbelt laws, together with the development and implementation of road safety interventions specifically focused on high-risk groups.”

San children not more innovative than other kids

Are San children better than Western kids at making plans and creating new tools to solve some kind of a problem? No, says Mark Nielsen of the University of KwaZulu-Natal and the University of Queensland, who led a study to be published in the Journal of Experimental Child Psychology.

Nielsen says the capacity for construct new tools, or to use old tools in new ways, to solve novel problems is a core feature of what it means to be human. Yet current evidence suggests that young children are surprisingly poor at coming up with new tools. They wanted to find out if such a lack of ingenuity was culturally or economically specific. Because all studies of tool innovation to date have been conducted with children from comparatively privileged Western backgrounds, his team turned their attention to remote San communities in South Africa.

It seems that a child is a child is a child. “Consistent with past research, we found tool innovation [among San children] to occur at extremely low rates and that cultural background had no bearing on this,” says Nielsen.

The current study is the first to empirically test tool innovation in children from non-Western backgrounds. The data is consistent with the view that despite its key role in human evolution, a capacity for innovation in tool making remains remarkably undeveloped during early childhood.

The groundwater of the northeastern coastal region of KwaZulu-Natal has quite a high iron (Fe) content.  When this iron rich groundwater is pumped out to the surface, it has a cloudy reddish colour.

This happens because the water forms a precipitate of solid Fe-oxyhydroxide. This condition is caused by the interaction of Fe2 +in the groundwater with oxygen in the atmosphere. All this makes the water unfit for many purposes, including using it for domestic purposes.

This highly affects the local community’s water supply,” explains Molla Demlie and colleagues of the University of KwaZulu-Natal, in a study published in the Journal of Geographic Exploration.

They set about looking for the source of high iron within the Zululand plain groundwater system, and also investigated the health implications and affordable treatment options that could make the water suitable for use.

The high iron concentration in the water increases growth of unwanted bacteria forming slimy coatings in water pipes. “When consumed excessively, it can lead to the build-up of iron in the body resulting into iron stores (high serum ferritin) which may be linked to diseases such as diabetes, heart disease, cancer and kidney problems,” says Demlie. “High residual content of iron in drinking water is also responsible for the unaesthetic nature of the water such as the metallic taste, discoloration and unpleasant smell of the water.

The team says that the anaerobic groundwater conditions and the pH range observed during the investigation along with the presence of ferricrete and pyrite rich layers are responsible for the high concentrations of iron (II).

They recommend an affordable groundwater treatment method based on aeration to safeguard community health, avoid expensive alternative water supply schemes and improve the negative perceptions of communities towards groundwater.

Cape rivers, be warned, yet a new enemy is lurking – this time upstream. Studies over the past seven years by researchers from Rhodes University have shown that the African sharptooth catfish is already found in the vicinity of at least three episodic headwater streams in the Cape Floristic Region after having moved up from downstream populations.

African sharptooth catfish (Clarias gariepinus) has been spread globally, and is rapidly establishing new populations in South Africa. It’s quite an invasive fish, and definitely impacts the native fish species of its new host rivers.

Not many species typically occur in headwater streams, but those that do are quite often endemic and specific to an area. The Cape Floristic Region, for one, is an area known for the high number of fish species that are unique to this area. Until the Rhodes study, no information was available on whether this catfish could actually penetrate or establish in the headwaters of the Cape’s rivers.

Data demonstrate that C. gariepinus invaded all three headwater tributaries and was able to penetrate previously non-invaded threatened fish refuges. On the bright side, Clarias gariepinus failed to establish in headwaters and their presence was casual with individuals migrating from mainstem sources. Headwater incursions were dynamic and C. gariepinus reinvaded streams following their extirpation through drought.

“These results indicate headwater streams to be invasible by C. gariepinus and an assessment of potential impact on headwater communities requires urgent attention,” believes Bruce Ellender of Rhodes University in an article in the journal Biological Invasions.

The findings add to the concern that this species will invade headwater stream communities that are already considered fragile and heavily impacted by non-native invasive fishes.