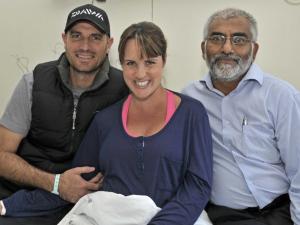 Professor Samad Shaik of Stellenbosch University is sentimental about a somewhat grainy photograph. It shows four toddlers on whom he performed lifesaving operations before they were born. After the procedures, they were allowed to develop further to full term in their mothers’ womb.

He is the only paediatric surgeon in South African able to perform intricate foetal surgical interventions involving anything from closing spina bifida to opening blocked bladder pipes. During such procedures, the baby can be removed partially or fully from the womb for up to three hours, because its vitals are still controlled through the mother’s umbilical cord.

This graduate of the University of Natal Medical School believes it’s simpler to perform certain procedures before birth.

“For instance, it’s easier to remove a growth from a baby’s neck whilst the baby is still attached to the placenta than struggling to insert a respiratory pipe after birth to do the same operation,” he explains.

Prof. Shaik also believes that foetal intervention should be “the gold standard” for selected spina bifida cases. Comprehensive American research show that the closing up of a foetus’ spinal cord prebirth dramatically improves a child’s quality of life and further ability. The same procedure can of course be done after birth, but by then the spinal cord has already been damaged through exposure to amniotic fluid.

“Foetal surgery can contribute more to the developing world than we probably realise,” he shares the sentiments expressed by Dr Diana Farmer, one of the pioneers of foetal surgery, at a recent conference in Cape Town. “Amongst others, it saves costs when the baby recuperates for free in the best ICU – its mother’s womb – than occupy precious beds in neonatal ICUs after birth”.

“Some of the first experiments in this field were done in Cape Town in the 1950s by Dr Chris Barnard and Dr Jannie Louw, who operated on pregnant beagle dogs,” he explains. “They showed that you could operate on something that is pregnant, work on the baby and put it back in again, and both could live.”

Such interventions were first tested on humans in the 1980s by American Dr Michael Harrison, initially with limited success. However, minimally invasive surgery has made procedures less complicated and risky for especially the mother involved.

Prof. Shaik first learnt about it in the late 1990s while in the USA on a Fogarty International Fellowship in Medical Informatics, Telemedicine and Robotics. Upon returning to South Africa, Dr Shaik subspecialised in paediatric surgery, followed by training in foetal and neonatal medicine in France and Belgium. He initially worked at the Albert Luthuli Academic Hospital in Durban before entering private practice in 2007. He developed close relationships with materno-foetal specialists and obstetricians in the region, and his practice steadily progressed from offering mainly antenatal counselling to providing the full spectrum of invasive foetal interventions.

He fully realises the “medical, ethical and legal minefield” he works in. Should a mother, for instance, only be put at risk when her baby has a life threatening condition? Or also to improve the potential quality of life of the future child too, for instance by cutting amniotic bands which, if not removed, could cause a baby to be born without one of its limbs?

“It actually gives another option to parents who do not want to abort once they receive a diagnosis that something is wrong with their unborn baby, and who want to give their children a better quality of life,” Prof. Shaik says measuredly. “We do not always know that a procedure will work, because it is still quite new, but at least the option’s now there for parents willing to take the risk.”

He became the head of the Division of Paediatric Surgery at Stellenbosch University’s Faculty of Medicine and Health Sciences in 2014. This academic and teacher by heart realises the importance of training more paediatric surgeons, especially since seven of the country’s most senior practitioners retired recently.

He hopes his new role will also allow him to put adequate research behind the procedures he performs. “Because it is so controversial, I want to do it within a proper scientific community before simply taking it forward,” it comes carefully. “Even though there is scientific evidence for foetal surgery, one is open to severe criticism when doing something innovative.”

* This is a revised version of an article first published in the 2014 annual publication of the Faculty of Medicine and Health Sciences at Stellenbosch University. To read the full publication, click here.