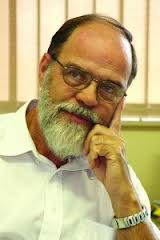 When he was a boy, tuberculosis (TB) expert Paul van Helden actually wanted to be a game ranger. Fortuitously for the millions of people living with this lung disease he gauged opportunities in conservation to be limited and opted for a career in biochemistry.

Since moving from general biochemistry into the research of the bacteria Mycobacterium tuberculosis in 1989, he has built up a team of experts with diverse skills to help fight this curable, preventable disease that annually kills 1,4 million people worldwide – 95% of whom live in low- and middle-income countries such as South Africa.

The outdoors remains his passion, and in his spare time Van Helden and his wife and fellow TB researcher Dr Eileen Hoal van Helden are honorary rangers in SANParks, and work mostly in the Table Mountain National Park. They do anything from foot patrols to raising funds for equipment.

A few years ago his research group started to study the occurrence of TB in animals. “And I love that, because I am able to combine my professional interests and love with my boyhood passion.”

However, it does not mean that this recipient of the Gold Medal of the Academy of Sciences for South Africa (ASSAf) gets to be in the bush somewhere doing sampling work.

“I cannot spend that kind of time away from the office, and also, I’m not a vet and not licensed to handle animals,” he quickly notes.

“One of my fears is to become a malignant dictator,” he says of the demands of organising such a big team. “One of the benefits of working with top class scientists, though, is that they will not allow that to happen.”

He cites an open door policy and a technique he jokingly calls ‘MBWA’ (‘Management by Walking Around’) as strategies that help him to seemingly seamlessly integrate the various units:

“Every single day I’m at Tygerberg I spend a lot of time walking around and randomly talking to people in their labs and offices to hear how things are going,” says Van Helden, who prefers managing his own diary.

The first PhD student to work with him on TB, Tommy Victor, is still part of his core team, and now manages among others a culture bank and database relating to drug resistant cultures.

His  team of more than 140 physiologists, biochemists, anatomists and geneticists also includes research group leaders Rob Warren, Eileen Hoal van Helden, Gerhard Walzl, Andreas Diacon, Ian Wiid and Nico Gey van Pittius. They work on a continuum of projects to challenge the TB epidemic from all sides ­from basic and applied research to matters that influence policy, healthcare delivery in clinics and hospital, or increase awareness of the disease among children.

“Much of what we do, including the animal TB line, arose from me moving from where we were to  open up new research angles,” he explains his crucial role first as researcher and now as facilitator. “I’ve either started it myself, or assisted people to get going.”

“TB is intellectually a very stimulating field to be in, because it’s a disease which isn’t just complicated in terms of the bacterium itself, but also has host complexity, namely the patients involved and the interaction between them,” he adds. “You also have all the social aspects, matters of delivery, treatment and their outcomes to take into account.”

The estimated number of people falling ill with tuberculosis each year is declining in many parts of the world, albeit slowly. However, it is still the disease second only to HIV/AIDS that causes the most deaths worldwide due to a single infectious agent. It is also the leading killer of people living with HIV.

“The situation is definitely not hopeless,” he reflects on progress being made. “Compared to 20 years ago we have lots of exciting tools and information coming out.”

New compounds are seeing the light and healthcare delivery is on the up.

Yet, patients still have to follow a six month regime of antibiotics in the hope of being cured, while there is still no point-of-care diagnostics available to make immediate identification of infected patients possible while they visits the clinic.

“One of the reasons why we lost the battle in the past is that we didn’t understand the disease properly,” believes this prolific author of more than 300 papers, who in 2009 was recognised as the 4th most cited TB researcher worldwide.

“We made many assumptions based particularly on research done in developed nations where TB is relatively rare and on the decline anyway,” he explains. “Processes and policies were based on work done in other countries and then simply translocated here.

“And you simply can’t do that,” he stresses. “A disease such as TB has not only scientific components, but is intimately linked to culture, society, poverty and local and international norms and activities.”

The behaviour of people, the current healthcare delivery system, and unlimited demand measured against limited resources are all “very, very difficult” to manage.

“You should try to design a system that can provide optimal care with the resources at your disposal,” believes Van Helden, ever the optimist.

(This article is based on a profile article that appeared in Research@Stellenbosch 2013).