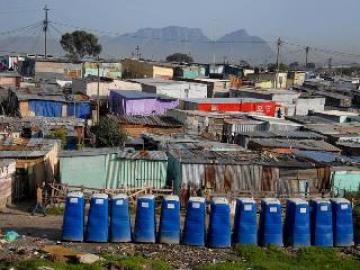 South Africa’s water and sanitation challenges are plain to see – whether it’s an image of women walking kilometres with buckets on their heads, or Cape Town’s poorest resorting to outrageous acts of protest, sanitation cuts right to the heart of human dignity in this country.

This is why the DST announced a partnership with the Bill and Melinda Gates Foundation at the Reinvent the Toilet Fair in India last month.

The government has committed R30 million to the project, with an additional R10 million in support from the Gates Foundation. The toilets will be tested at rural schools in Cofimvaba, in the Eastern Cape, as part of a larger Technology for Rural Education Development Project (Tech4RED), as well as in 23 rural municipalities.

Henry Roman, Director for Environmental Services and Technologies at the DST, says that they are aiming to demonstrate some of the technologies that have emerged from the Reinvent the Toilet Challenge. Launched in 2011 by the Gates Foundation, the challenge provides funding to develop toilets that can convert human waste into valuable products such as energy, clean water and fertilisers. These toilets also need to work “off the grid” and cost less than 50c per user per day.

In a press release Brian Arbogast, the Director of Water, Sanitation and Hygiene at the Gates Foundation, says, “By applying creative thinking and new approaches to sanitation challenges, we can improve people’s lives. And we have no doubt that this new partnership with South Africa will help us achieve this. We believe that with governmental leadership, new business models and innovation, we can dramatically increase the progress made in tackling this global sanitation crisis,” he continued.

According to Roman, the department will evaluate 55 different types of toilet before choosing five to be tested over a two year period, alongside a local toilet technology produced by engineering company Maluti GSM.

“We would like to see that the demonstration technologies are applicable to a South African context,” Roman said. They will also work with the original designers (through the Gates Foundation) to adjust the designs where needed, and to train local service providers.

Despite government targets of universal access to sanitation by 2010, many South Africans still do not have access to basic facilities like a clean toilet. A UN report in 2011 showed that 74% of the South African population had access to hygienic toilets; that leaves nearly 13 million people without the safety and dignity of adequate sanitation. The project is trying to address this by focusing on rural communities where, according to the DST, the need is most pressing. Says Roman, “We are looking at people unlikely to get water-borne sanitation in the near future.”

An important part of the project is to involve the affected communities in the process. Speaking at the Reinvent the Toilet Fair in India, the sustainability manager at Kohler, Rob Zimmerman, is reported to have said, “Regardless of the technology developed, cultural acceptance of the solution is the key to its success.”

The importance of this concept is clear to see in previous attempts to provide sanitation in informal settlements: time and time again, a top-down approach without understanding the real needs of communities has resulted in poor acceptance of technology, or rapid failure through misuse of facilities.

Lus for more? Go to GroundUp for seconds.

Magnet barriers could save sharks