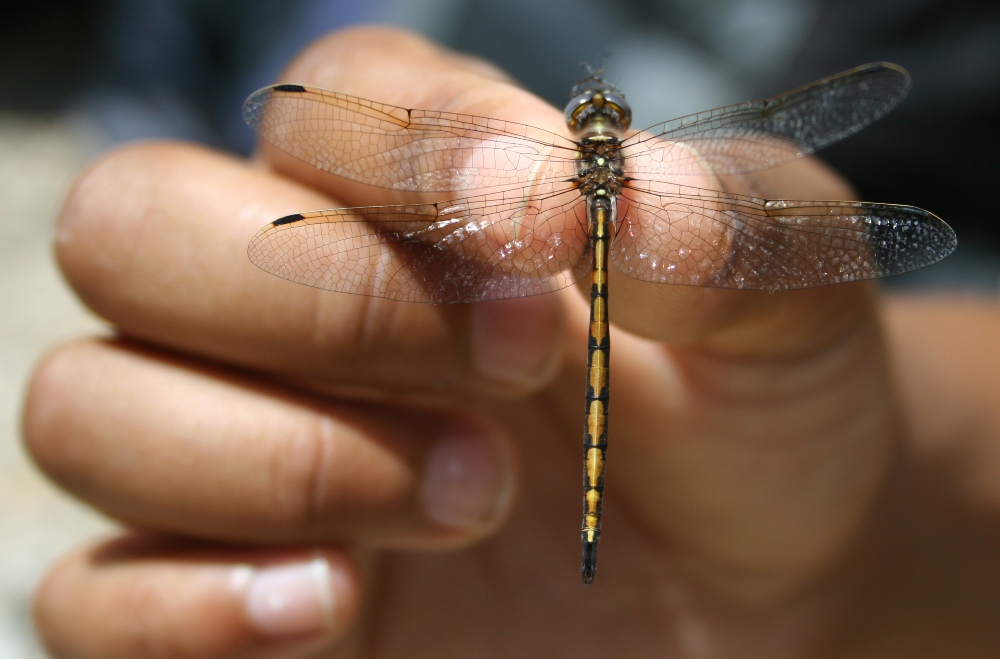 Stellenbosch University water ecologist Dr John Simaika has spent lots of time around dragonflies since one serendipitously landed on his dinner plate while he was discussing his honours degree project.

Along with his former postgraduate supervisor, the renowned insect conservationist Prof Michael Samways of the SU Department of Conservation Ecology and Entomology, he has recently written the Manual of Freshwater Assessment for South Africa: Dra The new 224-page full colour provides a biotic index by which dragonflies are used to assess the quality of freshwater sources in South Africa.

Scibraai asked him a few questions. First up, let’s ask him to introduce himself.

I hail from Canada, but received my MSc (in Entomology, in 2008) and PhD (in Conservation Ecology, in 2011) from Stellenbosch University. Since then, I have worked at the University to research the hydrological services provided by coastal ecosystems, and the dispersal of various waterliving insects and other organisms. I also worked for a year or two in the Seychelles for its Marine Conservation Society.

I am now a research fellow of the SU Department of Soil Science and lead a three-year project on the impact of alien plants on water quality. I also teach on environmental issues at the University’s School of Public Leadership, and am an associate editor of the African Journal of Aquatic Sciences.

Explain the link between dragonflies and soil science?

There are very tight links across ecosystems! Dragonflies and damselflies are aquatic in their juvenile stage, and it is the winged adult that disperses across the landscape. They are top predators, both in the water and in the air, and thus are intimately linked with the food chain, constantly moving nutrients and energy from water to land and back. Land management has huge implications on soil and water quality, and these insects will be affected by land management practices both directly and indirectly. For example, in human-modified landscapes, soil loss from heavy precipitation means that lots of silt and nutrients enter the water, which can have negative effects on some species, as silt and nutrient inputs change the living space and the food based for these creatures fundamentally. Indirect changes must also be considered. In some systems, human monoculture can contribute to some species becoming pests.

Do you have any favourite dragonflies?

This is a difficult one to answer, as all species are special in their own way, whether big or small, colorful or drab, common or rare. In fact I find it cliche for people to seek out the rare and uncommon species, a practice called ticking among birders, as each has a unique evolutionary history and is adapted to its environment in its own way. I do however have a special liking for the Malachites and Presbas, as I have spent a lot of time in the field collecting adults and larvae of species in these groups. Particularly the Malachites are interesting because their behaviors and the habitats they make use of are just so very different between species. For example the Rock Malachite, as its name suggests perches on rocks and is superbly camouflaged, as it sits on beige rocks with little patches of black or brown lichens. If you try to catch it, and swing a net at it, you would expect it to fly up and in to the net. Not so. The damselfly simply keeps sitting on the rock. Another interesting thing about them is that they lay their eggs in lichen that is attached to the rocks they perch on. This is a very uncommon method indeed. * Do you have a special story to tell about one of your finds/excursions?
There are many fun stories to tell, with time spent with lots of good people in the field. One story that comes to mind, however, is a cautionary one: Looking for critters can sometimes be a dangerous job, and in retrospect I probably took more risk than I should have. On most days I took alone to the field, with just a backpack, some food and water. I was going down a ravine to reach a stream, when I lost my footing and basically tumbled a few meters down. I was very lucky that a shrubby fynbos plant caught my fall. Lying on my back, I slowly turned to look down, where I could see the stream underneath me. I slowly extracted myself, and realized that if it hadn’t been for that bush, I’d be lying somewhere on the side of that ravine in pain and with no way to reach anyone. From then on, I realized that however rare or special a species might be, it is not worth putting myself in danger. I also had a new liking for fynbos shrubbery.

* Why do you think the book you co-authored with Prof Samways is important?
It synthesizes many years of scientific work and makes this research accessible to the public. The strengths of this book are that it is easily accessible, as anyone can download it, print it or share it, anywhere in the world. It is visually stimulating, and it is an easy read. There are lots of dragonfly enthusiasts out there, who are likely to us the book and share it, and get other people interested in dragonflies and thee habitats they depend on. Books such as this are a great starting point for getting people to care about something. If only one in ten readers were to think about more deeply about freshwater conservation, then I think we will have done a good job. I hope that it will also encourage people already working in the water sector, particularly in the water resource arena, to think differently about freshwater biodiversity conservation, which all too often takes a

* Briefly explain how your life with dragonflies started
This was a decision made over lunch at the university gardens. My entomology lecturer and physiology lecturer were good friends, who had both come over from Glasgow in their youth to continue their academic careers at the University of Victoria in Canada. They had regular lunches at the gardens, enjoying some sun, good wine, and a break from student inquiries. At the lunch was also the Dr Robert Cannings, the Curator of Entomology from the Royal British Columbia Museum. We discussed possible projects for a directed studies course (a self-directed undergraduate module), in particular one on two damselflies that were only recently discovered to be two separate species. The idea was to describe them and to understand their ecology a bit better, as they were thought to largely share ranges and habitats. As we chatted about the options, a damselfly from a nearby pond settled on my plate. “Now you have to do the project!” exclaimed my entomology lecturer. Everyone laughed, and that put me on my path towards working with dragonflies.