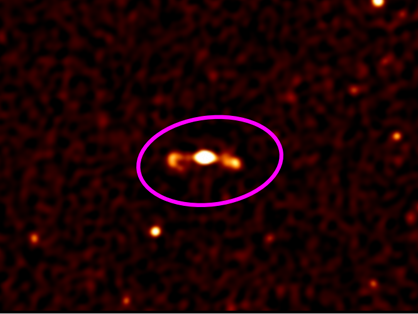 THE MEERKAT radio telescope opened its eyes for the very first time last month and with the science being done, produced amazing images.

MeerKAT lead scientist, Dr Fernando Camilo, took journalists and government officials on a journey that started with KAT-7 to the 16-dish MeerKAT array that ends with a stunning result.

On July 16 2016, the Department of Science and Technology celebrated the milestone of 16 of the 64-antenna radio telescope under construction on the SKA site in the Karroo. They invited the media and various government officials to be the first in the world to witness the astonishing images to come from this proudly South African effort.

Dr Camilo started off by showing some images of galaxies with dust obscuring some of the interesting bits. Visible light isn’t able to penetrate these regions and on optical telescopes, these regions appear as dark blemishes on otherwise stunning images.

“We can learn a lot about the universe and how it evolved by studying these kinds of images,” said Camilo. “You need a powerful radio telescope like MeerKAT for that.”

Camilo went on to explain how placing antennas farther apart in an array such as MeerKAT “sharpens” the telescope’s view of the sky. “The further apart the dishes are, the sharper the view is.

“It is as if you are myopic and you need to get a pair of spectacles, and suddenly you see the world in a sharper view.”

The evolution of MeerKAT

Before MeerKAT, there was the KAT-7 array telescope that produced amazing science. As an example, Camilo showed some images taken with KAT-7.

“This yellow blob is some sort of radio source in the sky, some sort of galaxy in the distant universe. You simply cannot tell what this is. The image isn’t sharp enough,” he said. “Now we look at the same patch of sky with four MeerKAT dishes.”

After a collective gasp from the audience in response the much improved image from MeerKAT; “The universe has not changed; it is just the telescope that has changed.”

The MeerKAT image shows three distinct radio light sources when compared to the less remarkable KAT-7 image which just shows them as one yellow blob.

“There are still many questions with this one that we would like to address.  Are these three separate galaxies or are they related? They appear to be in a line, perhaps that is just coincidence or is it? We still want better spectacles.”

And with that Segway he proceeded to show what happens when you move from using 4 MeerKAT antennas to 16.

“Now you can see that this is one object with a central bright source of radio waves, which we understand is a black hole,” he said pointing to a much sharper image from the previous one.

“These are thin jets that connect a central point source to these two lobes of radio waves where a lot of the energy from the central black hole ultimately gets deposited.” At the centre of each galaxy is a supermassive black hole that shoots jets of charged particles in two directions, as the MeerKAT image shows.

This particular galaxy is called and FR-2 Type object.  The “F” Fanaroff, as in the former SKA-SA director and South African radio astronomer, Dr Bernie Fanaroff, who is renowned the world over.

“What this image is telling us is that we have a working MeerKAT in the Karroo,” he says. “It is very, very difficult to get to this stage. You can build many dishes and have all sorts of problems and never get to see an image of this quality.”

Among the best in the world

The MeerKAT telescope has reached an important milestone with 16 antennas and performing much better than it was built to, but how does it compare to other telescopes around the world?

Using an image from a different radio telescope of the same kind, Camilo demonstrated that while this telescope only shows five radio sources in the image, MeerKAT is able to see over 200 radio sources from the same patch of sky!

He closed with a nod to the all-South African team of men and women working on a world-class radio telescope they can truly call their own.

When completed, MeerKAT will have a total of 64 dishes which is expected to be delivered by the end of 2017.