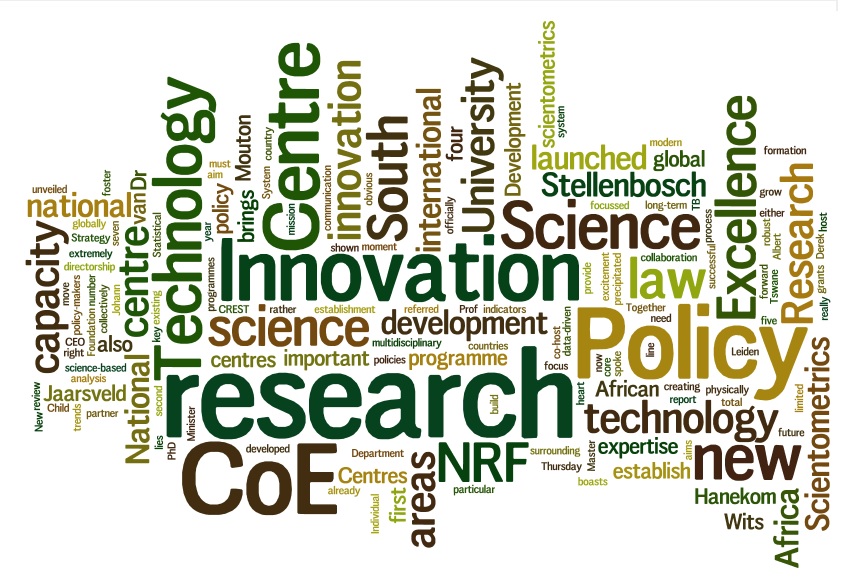 These four areas are:

Stellenbosch University will physically host the centre at its own Centre for Research on Evaluation, Science and Technology (CREST), under the directorship of Professor Johann Mouton. Tswane University of Technology will be a co-host and the University of Leiden, Netherlands, will act as an international partner.

The new centre is officially called the Centre of Excellence (CoE) in Scientometrics and Science, Technology and Innovation Policy.

At the core of its aims is the development of a robust national system of innovation. It will also provide policy-makers with the tools and analysis that they need to move South African Research and Innovation forward into the modern, data-driven age.

This is the second of five new CoEs to be launched this year; the first, The Centre of Excellence in Mathematics and Statistical Sciences, was launched on April 1st at Wits University. Together, this brings the total number of National Research Foundation (NRF) Centres of Excellence to 14.

Hanekom spoke with obvious excitement about the new centre: “This CoE must build on our existing capacity in scientometrics and innovation policy … In a sense, this new CoE lies right at the heart of the mission of the Department of Science and Technology and the NRF.

“This is really a very exciting moment for our National System of Innovation,” he said. The new CoE already boasts more than 40 Master’s and PhD students, who Prof. Mouton referred to as the ‘future research team of the Centre for Scientometrics’.

The NRF’s CoE programme has been extremely successful in growing research capacity in South Africa.  In 2002, a National Research and Development Strategy report said, “Individual research grants … have been shown globally to be limited in creating long-term research capacity, and most developed countries now have strong programmes to establish Centres of Excellence.”

This precipitated the formation of the first seven CoE’s in 2004. CEO of the NRF, Dr. Albert van Jaarsveld, said that these have focussed either on research areas where South Africa has particular expertise, such as the Centre for Biomedical TB at Stellenbosch, or areas in which it is important to grow research expertise, such as the yet-to-be-launched Centre for Child Development and Livelihoods at Wits. The establishment of a new CoE for Scientometrics and Science, Technology and Innovation Policy is an important step for South African research, and brings the country in line with global research trends.