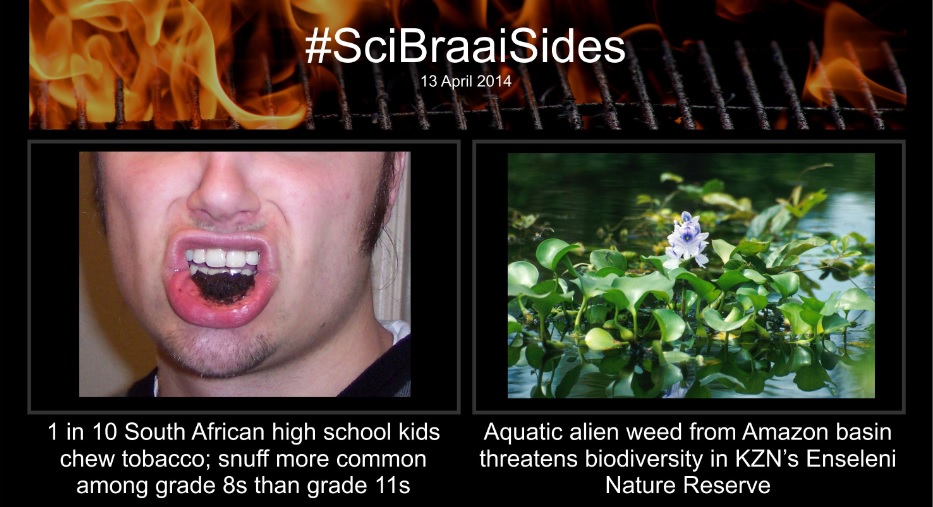 The use of snuff among SA teens, the impact of invasive water hyacinth on biodiversity, gardening in Limpopo and what to do with intellectual property developed at SA universities – here’s this week’s #ScibraaiSides: Thought that using snuff or chewing tobacco was only something your grandfather did? Think again. It’s a habit of more than one in every ten South African high school learners too.

This is one of the findings of a study led by Priscilla Reddy of the Human Sciences Research Council, on the use of various forms of smokeless tobacco among South African teenagers. The research appears in the journal Nicotine and Tobacco Research. The nationally representative study was conducted among 10,270 Grade 8 to 11 learners from 192 schools in South Africa.

Nationally, 12.4% of learners use smokeless tobacco such as chewing tobacco or snuff, with significantly higher rates among males (13.6%) than females (10.6%).

Use further varied based on demographics, tobacco smoking, and socioeconomic status. It was highest among African (12.8%) and Colored (11.7%) learners. Grade 8 learners (15.3%) also reported significantly higher rates of use than Grade 11 learners (9.1%). Teens who already smoke (21.3%) were also more likely to also use smokeless tobacco than those who do not light up a cigarette (10.1%).

She advised policy makers and program developers to develop targeted and tailored interventions for young people regarding smokeless tobacco use.

Water hyacinth Eichhornia crassipes (Pontederiaceae), a free-floating aquatic plant native to the Amazon Basin, is listed as one of the top 100 invaders in the world in the Global Invasive Species Database. Introduced into South Africa as an ornamental plant in 1908, water hyacinth remains the country’s most difficult aquatic weed to control despite efforts since the 1960s to control it.

A new study in Biodiversity Conservation, led by Julie Coetzee of Rhodes University, highlights the effect that these invasive plants can have on the family richness and number of tiny benthic organisms found in a conservation area in KwaZulu-Natal.  It was conducted on the Nseleni River, in the proximity of Lake Nsezito the west of Richards Bay. The Enseleni Nature Reserve is the only formally protected area within the City of uMhlathuze. All of the surrounding area has been transformed to residential areas, sugar cane farms and eucalyptus tree plantations.

“The nature reserve has therefore become a refuge and nucleus for biodiversity, with the Nseleni River being a conduit for aquatic biodiversity between the protected area and outlying areas,” says Coetzee.

The researchers collected species from 29 different families during the course of the study. Examples of 27 families were collected from the open water sites, with only 13 families were found living under the dense mats of water hyacinth. Of the individuals collected, 817 were from under the water hyacinths, compared to 17,980 from open water sites. These include mayflies, shrimps, snails, mussels, clams, beetles and leeches.

The importance of benthic invertebrates in ecosystems generally goes unnoticed because they are cryptic, occurring below the water’s surface, until unexpected changes occur in ecosystems. Any change or reduction in benthic invertebrate diversity has important consequences for ecosystem functions such as sediment mixing, nutrient cycling and energy flow through food webs.

“While studies have demonstrated the positive attributes of water hyacinth, such as nutrient control, phytoremediation and increased biodiversity in certain assemblages, the costs associated with its presence in the majority of systems around the world far outweigh its benefits,” believes Coetzee, who advises that water hyacinth be controlled. “Our study has shown that dense water hyacinth cover significantly impacts the biodiversity of benthic invertebrate assemblages.”

The authors believe this impact is particularly important in protected areas such as the Enseleni Nature Reserve, which sets out to conserve and use biodiversity sustainable for present and future generations.

Taking a look at gardening in Limpopo

A garden is a garden is a garden. Not so, says researchers from the University of Fort Hare, who have found a vast difference between what is grown (and why) in gardens on the edge of urban areas and those that thrive in rural areas.

Relatively little has been researched or published on the importance of peri-urban domestic gardens as part of a household livelihood strategy in South Africa. What is their potential value as luxury green space? What role do they play in the provision of food, income and ecosystem services to the fast growing urban population in South Africa? To help answer some of these questions, Gabolwelwe Mosina and colleagues from the Department of Botany at the University of Fort Hare looked at the differences and similarities in plant use and diversity in 62 domestic gardens of two communities, Seshego and Lebowakgomo, close to Polokwane in the Limpopo Province.

“Comparison of the two areas demonstrated a remarkable difference in plant use and composition, based on their proximity to the urban area,” highlights Mosina.

The researchers counted 126 plant species growing in the gardens of both Seshego and Lebowakgomo. Food plants (47 species, 83.8% of the total food plants recorded) and medicinal plants (31 species, 83.7%) were abundant in the more remote areas of Lebowakgomo. A higher number (76,7%) of indigenous plants were grown here, and showed similarities to the natural surrounding vegetation in terms of plant species. On the contrary, more exotic plants (81,8%) grew in the domestic gardens of Seshego, on the periphery of the city centre. The gardens were dominated with ornamental plants (73%), with food plants playing only a supplementary role.

To spin-off or to license?

Had a brainwave while working at an university? Is it best to start a spin-off company, or to rather license the idea to another entity? Take a word of advice from two Stellenbosch University academics.

In an article published in the journal Industry and Higher Education, Ramazan Uctu and Rachel Jafta of Stellenbosch University focuses on the option of intellectual property licensing of technologies that are available when universities embark on technology transfer to the private sector. In particular, the authors examined why academics who are in a position to create a spin-off opt for licensing.

“Funding, commercialization and distribution issues were among the most important factors that influencing the decision of an inventor or researcher not to create a spin-off company,” says Uctu. “Most researchers choose to license the technology in order to convert their knowledge into practical applications, to use existing knowledge fully and to make a financial profit.”

They used the University of Cape Town and Stellenbosch University, two of South Africa’s oldest and premier research-led universities, as their case studies. The results show that technologies originated mainly from the engineering and health sciences and the biotechnology industries. Also technologies were created through collaboration among researchers, and were mainly patented worldwide.