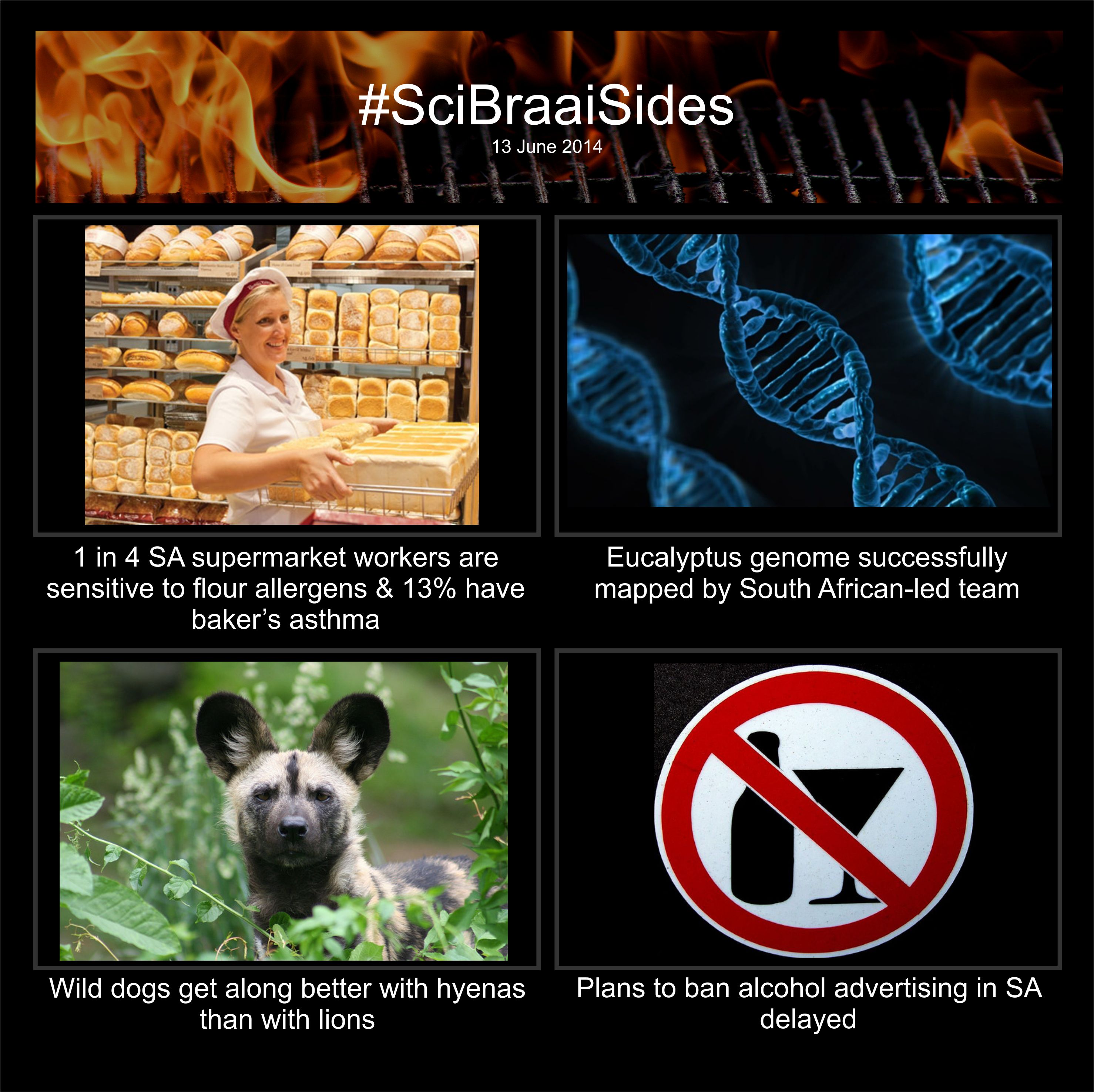 What to choose if you’re an African wild dog: a lion or a hyena as a neighbour? And how can one tackle baker’s asthma from which more than 1 in every 10 supermarket bakers suffer? A study in Nature highlighting the possibility of eucalyptus scented jet fuel and reflections on South Africa’s proposed ban on alcohol advertisement are also part of this week’s SciBraai Sides foursome highlighting interesting SA science. Move up, you wild dog, you

If an African wild dog had to choose between having a lion or a hyena for a neighbour, which one would he choose? A hyena, it seems, based on a study in PLOS One.

The study, led by Angela Darnell of the Humboldt State University in the US, found that African wild dogs keep their distance from lions more than they do from hyenas. This is among others because lions more often steal their prey and hunt them.

“Wild dogs avoided lions, particularly during denning, through a combination of spatial and temporal avoidance,” writes Darnell. Wild dogs did not avoid hyenas in the same way, most likely because wild dog pack sizes were large enough to adequately defend their kills.

Understanding that larger carnivores affect the movements and space use of other carnivores is important for managing current small and fragmented carnivore populations, especially as reintroductions and translocations are essential tools used for the survival of endangered species, as with African wild dogs.

“Although wild dogs can persist in areas with high densities of larger competitors, when considering reintroduction and translocation sites, it would be better to place new packs in areas with low lion density, as suggested by this study and others demonstrating high wild dog mortality due to lions,” writes Darnell.

Reference: Darnell, A.M. et al (2014). Space Use of African Wild Dogs in Relation to Other Large Carnivores, PLOS One A global research project that unravelled the genetic blueprint of the fast-growing gum tree Eucalyptus grandis was led by Zander Myburg of the University of Pretoria made it into the prestigious, high-impact scientific journal Nature.

Gum trees are highly adaptable and grow exceptionally fast. While native to Australia, these trees are planted worldwide, mainly for timber, pulp and paper production, but increasingly also for “chemical cellulose” – a form of pure cellulose used to make industrial products such as textiles to pharmaceuticals.

“Now that we understand which genes determine specific characteristics in these trees, we can breed trees that grow faster, have higher quality wood, use water more efficiently and will cope better with climate change,” Prof Myburg explains the significance of efforts over the past five years involving 80 researchers from 30 institutions across 18 countries. “We can turn well-managed Eucalyptus plantations into bio-factories to produce specific kinds of sought-after materials and chemicals.”

Terpene compounds are naturally produced in plants, and are found in high abundance in Eucalyptus trees. Such derivatives of sesquiterpenes that contain 15-carbon atoms (diesel fuel typically contains 10 to 24 carbon atoms) may be promising alternatives for petroleum-based fuels. Researchers have already made important breakthroughs in engineering aspects of terpene biosynthesis into microbes such as bacteria and yeast.

“This means that in future we could use specially selected Eucalyptus genes in bacteria and yeasts, turning them into bio-factories to manufacture advanced biofuels on a large scale,” hopes Myburg. “In future, jumbo jets may take off powered by renewable, Eucalyptus-based fuel.”

Making sure that supermarkets are well stocked with enough freshly baked bread doesn’t come without its risks. A recent study of supermarket bakery workers in South Africa showed that 1 in every 4 workers were sensitive to flour allergens, while 13% had baker’s asthma.

Enter Roslynn Baatjies of the Cape Peninsula University of Technology and the University of Cape Town, and her colleagues. They evaluated the effectiveness of various ways to help reduce the levels of airborne flour dust in a bakery. These include using mixer lids or divider oil, and giving on-the-job training to employees to make sure they know what to do.

The researchers found that the measures helped to reduce exposure to flour dust, wheat and rye allergens with 50%.

“The best results were observed when combining both engineering controls and training,” says Baatjies in an article in Occupational and Environmental Medicine. “Further studies will have to investigate the long-term health impact of these interventions on reducing the disease burden among this group of bakers.”

Three South African researchers have taken stock of the country’s plans to ban alcohol advertising – a process that seems to be bugged by various legislative issues.

Charles Parry of the Medical Research Council and Stellenbosch University, along with colleagues from the MRC and the University of Cape Town Leslie London and Bronwyn Myers, reflect on the matter in The Lancet.

They note the worrying statistic that about 130 deaths occur from alcohol-related causes every day in our country.

In September, 2013, the South African Cabinet moved forward on its plans to ban alcohol advertising by approving a Control of Marketing of Alcoholic Beverages Bill. This bill, which has not yet been released for public comment, is now subject to a regulatory impact assessment, and reportedly aims to help reduce alcohol-related harm and protect public health through limiting the public’s exposure to alcohol marketing by restricting advertising of alcohol products to points of sale, banning sports and arts sponsorships associated with alcohol products, and prohibiting the promotion of alcoholic beverages.

“The liquor industry is strongly opposed to the bill and has mobilised interest groups (including the advertising industry, business owners, small entrepreneurs, and marketing commentators) to challenge its merits,” believes Parry. “Industry criticisms have denied evidence of a link between alcohol advertising and consumption, and argued that an advertising ban is anticompetitive, will have dire consequences for the economy, promote trade in illicit liquor, erode personal freedoms, and hurt the arts and sports development through loss of sponsorships.”

Parry notes that the government, public health researchers, and advocacy groups have in response pointed to the evidence supporting a ban.

He says “the stakes are very high”, as the banning of alcohol advertising is South Africa might also lead to bans in neighbouring countries and undermine the alcohol industry’s efforts to develop new markets such as the targeting of women.

“This mirrors concerns expressed elsewhere that the way regulatory impact assessments are applied might undermine healthy public policy because of possible corporate influence,” they believe.