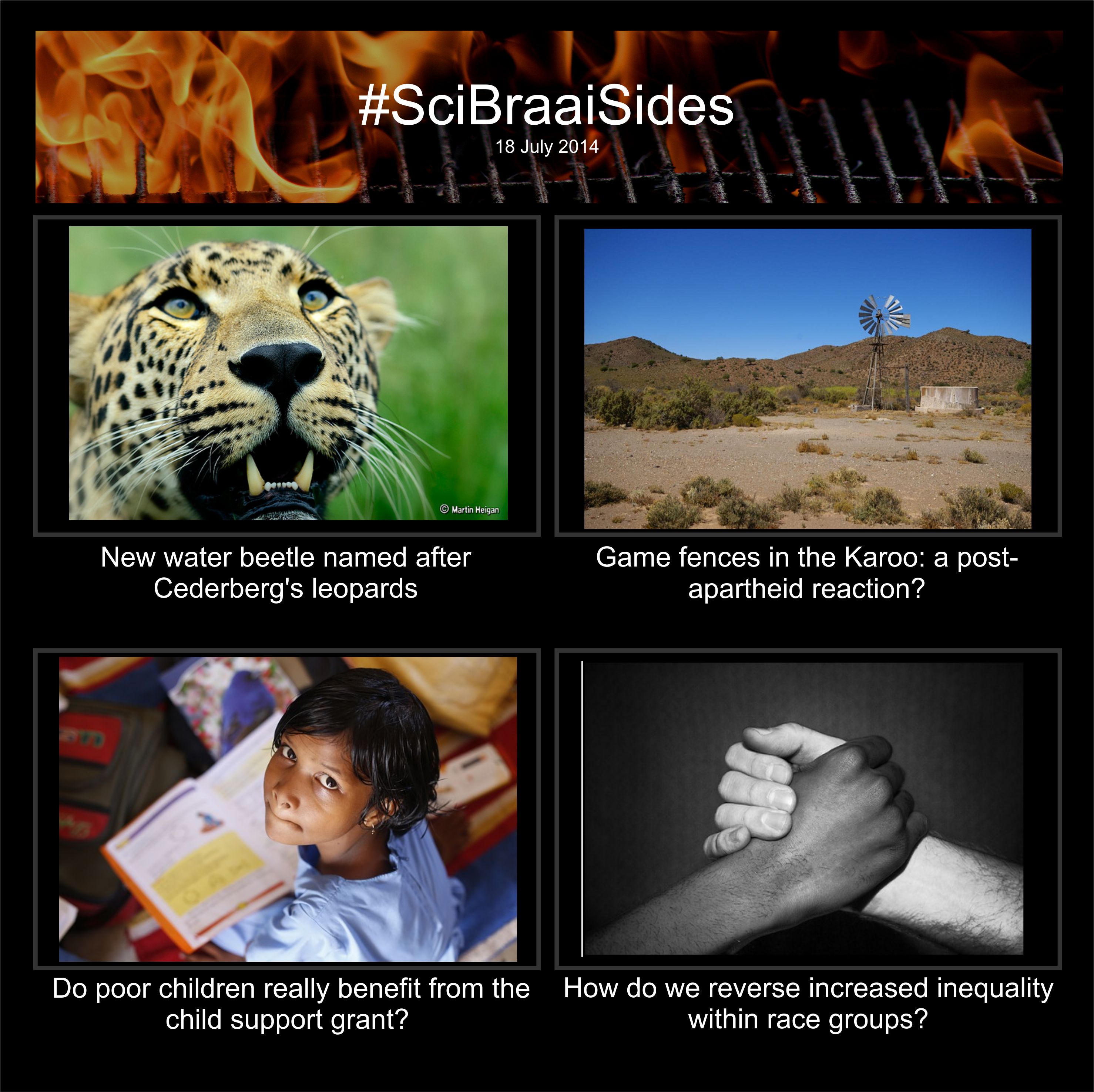 Your favourite Friday brain bite is back! On this week’s SciBraai Sides: a new water beetle, social grants, game fences in the Karoo and inequality within race groups. Marinade your mind: The gravelly river bed of the Matjies River in the Cederberg has a new resident – or at least a water beetle that is new to science.

The name of Laccobius leopardus sp. nov. was given in reference to the leopards which frequent the Cederberg Conservancy in which the type locality is situated, and the spotted appearance of its forewing.

It is described by David Bilton of Plymouth University and Elio Gentili of Italy in the journal Zootaxa.

With 257 species known worldwide Laccobius Erichson is one of the most diverse genera of Hydrophilidae. Most species have a relatively uniform convex, rounded appearance. To date only 26 species are known from sub-Saharan Africa, 11 of which have been reported from southern Africa and 5 being endemic to the region. Southern African species to date all belong to the subgenera Microlaccobius Gentili and Hydroxenus Wollaston. The new species belong to the later subgenera.

It is morphologically closest to Laccobius caffer Boheman, a species widely distributed from western and central Africa to South Africa and Namibia, but the two are distinguished on both their external looks and male genitalia.

“The new species was collected in marginal gravels of a drying river bed, a typical habitat for many Laccobius, and one which would repay further study in other parts of southern Africa, whose water beetle fauna remains incompletely known,” says Bilton.

Game fences in the Karoo: a post-apartheid reaction?

There’s more than conservation behind the recent conversion to wildlife habitats of many farms in the Karoo region of the Eastern Cape. It’s driven among others by the reaction of white farmers to post-apartheid land reform and labour legislation policies.

This is the opinion of Femke Brandt & Marja Spierenburg in a new article published in the Journal of Contemporary African Studies. Brandt is a researcher associated with the Centre for African Studies at the University of Cape Town, Cape Town, while Spierenburg is associated with the VU University in Amsterdam and the Department of Sociology and Social Anthropology at Stellenbosch University.

In the article, they discuss how farm conversions to wildlife habitats result in the reconfiguration of spatial and social relations on white-owned commercial farms in the Karoo region of the Eastern Cape.

“They seek to legitimate their position in society and reassert their place on the land by claiming a new role as nature conservationists,” writes Brandt and Spierenburg. “We argue that game farms should be interpreted as economically and politically contested spaces.”

They provide three reasons for their thinking:

Do poor children really benefit from the child support grant?

South Africa’s child support grant has been praised as one of the government’s most successful antipoverty programmes. But does it really make any real difference to the lives of the more than 11 million children who receive it.

Yes, it has increased the well-being children, says economist Marisa Coetzee of Stellenbosch University, in a commentary on the Econ3x3 webforum. Her analysis is based on data from the National Income Dynamics Study (NIDS) of 2008, a nationally representative household survey.

These positive effects are in the form of an increase in children’s height-for-age, an improvement in children’s progress through the school system, an increase in the households’ expenditure on food items, and a decrease on adult goods. Such effects are the strongest when the child grant has been received for at least 30% to 50% of a child’s life.

“Nutritional development and education is critically important for the well-being but especially the future of children – specifically their future employment and earning potential,” says Coetzee. “The results from this study confirm the importance of the child support grant as a tool to alleviate poverty and promote human development, also contributing to an eventual decrease in inequality in South Africa.”

Shoulder to the wheel to reverse increased inequality within race groups

“From a policy point of view, it is important to flag the fact that intra-race, and in particular intra-African, inequality trends play an increasingly influential role in driving aggregate inequality in South Africa,” says Arden Finn, Murray Leibbrandt and Ingrid Woolard of the University of Cape Town’s Southern Africa Labour and Development Research Unit.

They note that the government has provided substantial support to the poor through an expanded system of social grants. However, in an article in the SALDRU Research Brief the researchers note that there is still work to be done to stop and hopefully reverse the increasing inequality within each race group, and especially within the African group.

SA technologies could aid in the search for #MH370