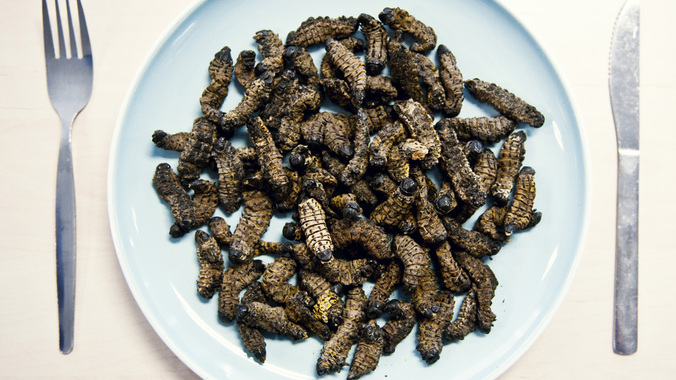 For some southern African communities, stinkbugs are a culinary delicacy, writes Cathy Dzerefos in an article that forms part of the Mail & Guardian’s Science Voices series. Dzerefos is a PhD candidate at the University of the Witwatersrand.

“If you have thongolifha you can leave the meat!” says a middle-aged office worker at Komatiland Forests.

“Thongolifha is number one. Better than Mopane worms or flying ants,” says another woman, a pensioner dressed in the traditional colourful striped attire and beads of the Vhavhenda people. Further south, in a Mapulana village, Max Mathebula exclaims that “even the smell is delicious to me.”

Otherwise known as Encosternum delegorguei or edible stinkbugs, thongolifha may be on your list of least desirable creatures — to have either in the house or in your mouth — but for some cultural groups in southern Africa they are considered a culinary delicacy and are being researched as a possible export product and nutritious food supplement.

The most widely used name is thongolifha but they are also called tsonônô in Bushbuckridge, meaning “he farts, he is fat”. Sometimes they are referred to by non-eaters as podile, a sePedi and seTswana generic term for all stinkbugs meaning “it is rotten”.

This particular stinkbug, which is the size of a 50c piece, can also be eaten raw as a cure for a hangover, according to most harvesters interviewed during a socio-economic study conducted through the University of the Witwatersrand.

A very important part of stinkbug preparation is to remove the chemical defence that earns stinkbugs their name.

The traditional way is to remove the head of a living insect by pushing it off onto a flat rock, gently squeezing the thorax of the decapitated body so that the stink gland pops out, and wiping the gland off onto the rock. Otherwise, you can rinse the wriggling, green stinkbugs under running water while stirring them to cause panic, which makes them release their noxious secretions. Then you transfer them to a pot of water heated to about 50°C for eight minutes, strain the now golden-brown stinkbugs and lay them out to air dry.

Once you have used one of the above methods to remove their chemical defence, place the stinkbugs on their backs in a frying pan with a little bit of water and salt to taste. They fry in their own fat, giving off a delectable bacon smell and are traditionally eaten as a topping to mealie meal, but are not combined with meat, tomatoes, spinach or onions. Stinkbugs have their own unique taste — a mixture of roasted cashew nuts and prawns — and give a satisfying crunch when you bite into them, releasing a fatty inside. Plus they are a good source of protein, minerals and vitamins.

Long considered a traditional delicacy of the Vhavhenda people in Limpopo and also the Mapulana in Mpumalanga, stinkbugs are even imported from Zimbabwe and Mozambique to supply the Thohoyandou market in Limpopo. Prices vary: R5 for an air-dried stink-less insect to R20 for a special order of live stinkbugs.

Edible stinkbugs could be developed as a minilivestock and marketed to traditional entomophagous (insect-eating) Asian markets, disguised in processed convenience foods such as breakfast cereals to improve the nutrient content, or used as animal feed. By using less fodder, water and space, insect rearing has a lower environmental footprint than conventional livestock production, and could be developed into a viable revenue stream for South Africa’s rural communities.

SCIENCE VOICES: Is life at its heart a quantum problem?